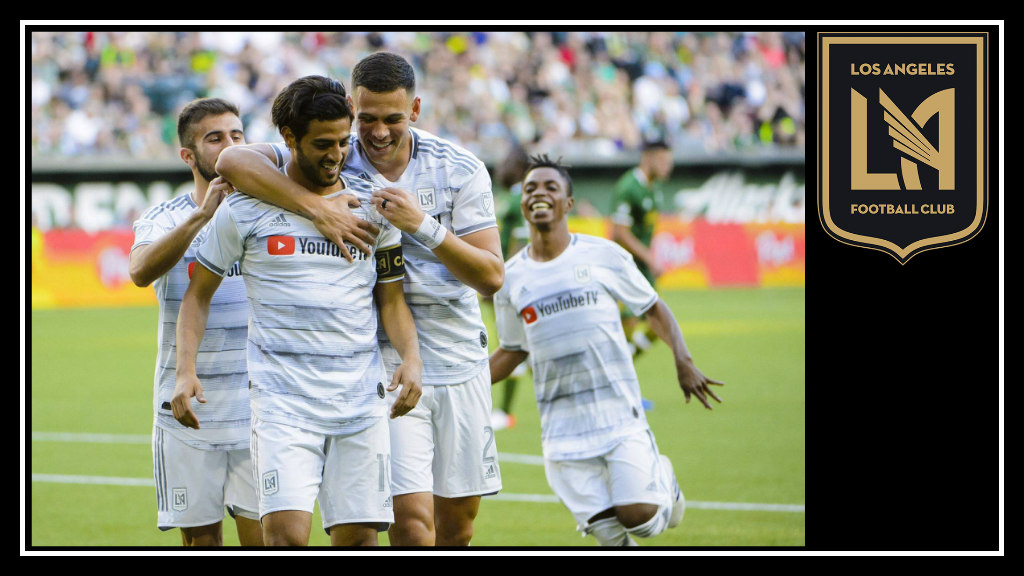 The Los Angeles Football Club ignites new rivalry with a 3-2 win on the road against the Portland Timbers during the grand re-opening of renovated Providence Park.

Carlos Vela, Diego Rossi, and Latif Blessing helped christen the newly renovated stadium before two of Timbers’ own added to the goal count. Around 750-1,000 traveling supporters made the trek to Portland to support LAFC.

And the Mexican captain didn’t disappoint as he got the early lead for the visitors in the 6th minute thanks to an error from Jeff Attinella – scoring his 16th MLS-career goal.

For a brief period of time, both teams kept slipping on the fresh new artificial turf but the black-and-gold used that to their advantage to stop Portland from finding the equalizer.

In the 20th minute, Eduard Atuesta – who has been a formidable player – was quick to block Diego Valeri in a crowded box; sending the ball to Blessing – who ran it down to the opposite end and was blocked.

Blessing would later find Tristian Blackmon from the sideline with a through ball. The Las Vegas native wasted little time to pass it to Rossi for his first assist – who then tucked it away in the right corner of the net to double the score in the 34th minute.

The Timbers immediately cut the lead in half off the rebound right after the restart. Miller saved the first attempt but then Cristhian Paredes opened up the home side’s goal account with the header.

Blessing, who has been dangerous in the midfield lately, was quick to answer Paredes by scoring the third and final goal of the night for LAFC in the 54th minute off a perfect run from Jordan Harvey.

In a six-minute stretch, Miller made two critical saves to deny both Brian Fernandez and Valeri to preserve the two-goal lead.

However, Miller’s efforts did not last long as Fernandez pulled one back in the 84th minute with a bicycle kick to up the score 3-2.

The drama spilled into stoppage time quickly as there were no signs of either team slowing down. Prior to the extra eight minutes given, Vela kept getting chopped down from behind. But alas, the Timbers received little to no punishment from referee Robert Sibiga. And second-half substitution Adama Diomande became the new subject of conversation during the dramatic final moments. He and Timbers’ Fernandez both received a caution following a brawl that broke out between the two.

With tensions high, the match ended in a 3-2 win keeping LAFC’s winning streak alive and cushioning their lead atop of the western conference even more with 37 points.

Before resuming regular MLS action, LAFC will travel to Rino Tinto Stadium to face Real Salt Lake on June 11 in the fourth round of the Lamar Hunt U.S. Open Cup.