MLS is Back, July 13: LAFC and Houston Dynamo Split Points in Hard-Fought Match 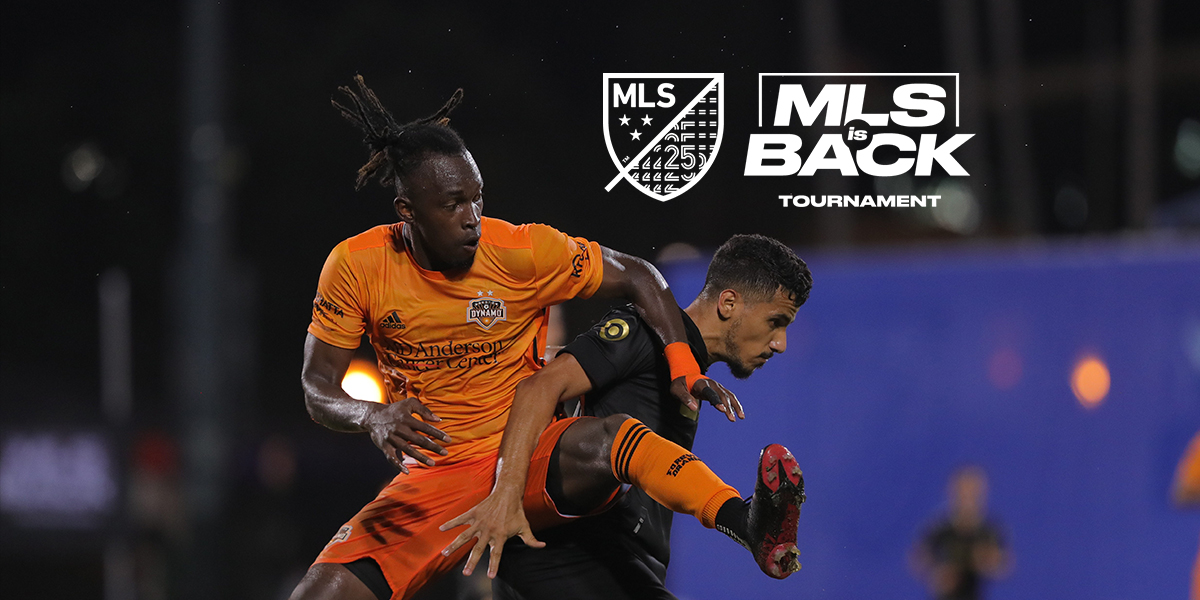 Los Angeles Football Club opened Group F of the MLS is Back Tournament in dramatic fashion as they earned a hard-fought point in a 3-3 draw over the Houston Dynamo on Monday night at the ESPN Wide World of Sports Complex.

The Black and Gold trekked on as Brian Rodríguez took over for Mexican captain Carlos Vela, who did not travel with the team. Bradley Wright-Philips made his official club debut after treating an injury he acquired shortly after his signing during the preseason.

LAFC was off to a strong start pressing Houston’s defense with 66.7% of possession. Mark Anthony-Kaye produced two solid opportunities within the first opening minutes when his right-footed shot was blocked and a header from the center of the box flew over the net – setting the tone for the match.

However, LAFC’s efforts were not enough. Memo Rodriguez slid one home to give Houston the early lead in the 9th minute.

LAFC was quick to try to respond as Philips found Rodríguez but the ball went out of bounds. Eight minutes later, Diego Rossi connected with the 35-year-old striker from outside the box for the equalizer and his first club goal in the 19th minute.

Goalkeeper Kenneth Vermeer initially saved the attempt from Memo Rodriguez at close range. But it bounced right off him to allow the young midfielder the opportunity to pounce on a loose ball, doubling Houston’s lead in the 30th minute.

Both sides continued to exchange chances, with Houston starting to take advantage of space and capitalize on LAFC’s mistakes. Diego Palacios found Philips but the ball went wide, leaving LAFC still trailing by one.

Misfortune struck again for LAFC when Houston’s Alberth Ellis rounded another one in the 45′ + 5′, but the offsides flag went up. However, the play stood after undergoing review, giving Houston their third goal of the night before the half.

The second half was more promising for the Black and Gold with Adama Diomande, Mohamed El-Munir, and Francisco Ginella making an immediate impact when they entered the pitch in the 60th minute. Unfortunately, Dio only played for 17 minutes before being subbed out for Danny Musovski due to an injury.

Diego Rossi thrived off the boost of energy his teammates brought, adding to LAFC’s total in the 63rd minute with a thunderous strike from inside the penalty area. Six minutes later, Brian Rodríguez finally scored his first club goal to equalize the match.

Leveled at 3-3, the Black and Gold pushed forward to find the game winner. Unfortunately, the final play fell short, giving both Houston and LAFC a point.

Next up, LAFC will search for all three points when they face the LA Galaxy on Saturday, July 18th.