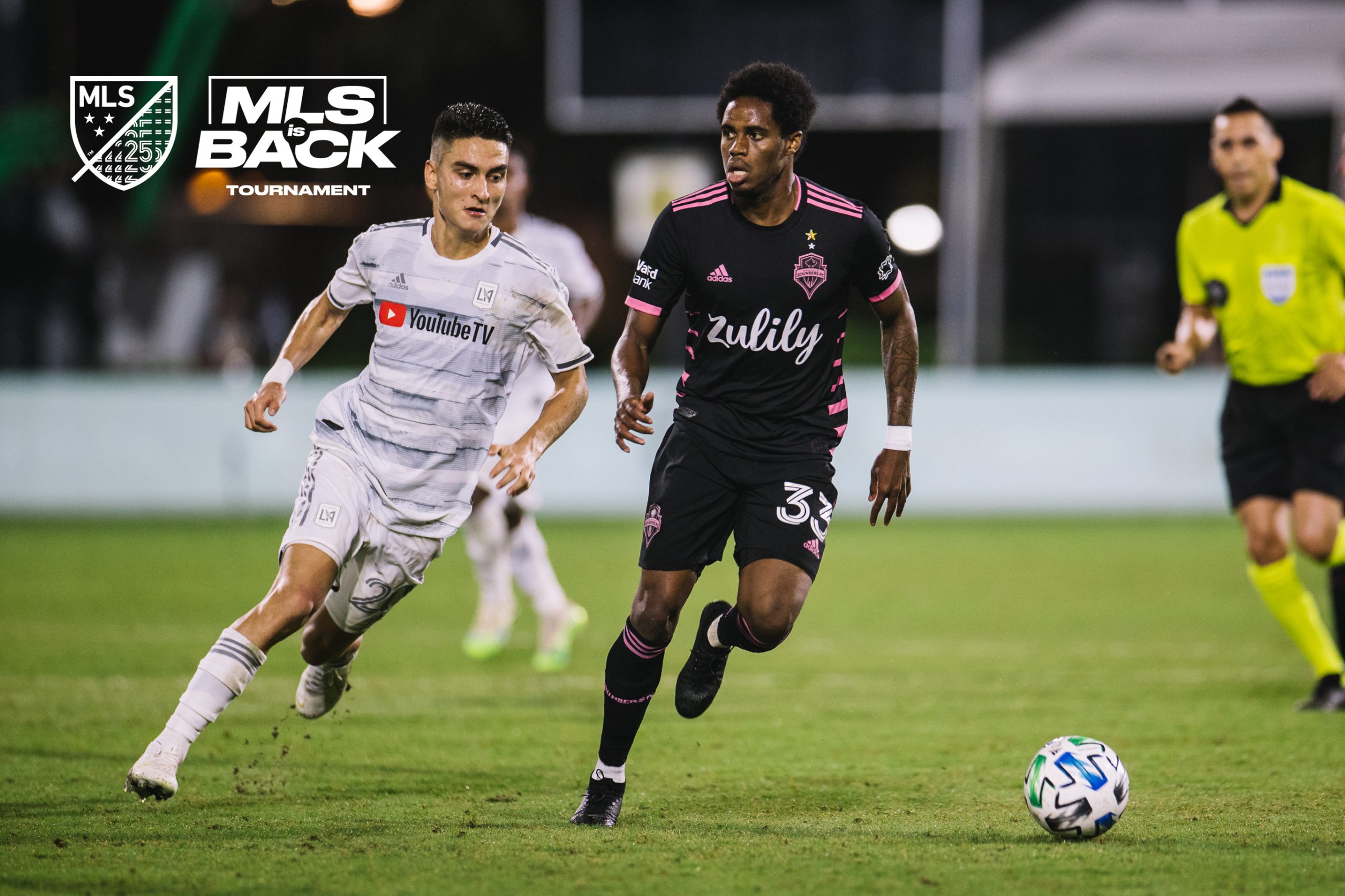 The Los Angeles Football Club claimed revenge in 4-1 win over the Seattle Sounders to advance to the quarterfinals at the ESPN Wide World of Sports Complex.

With a 91% humidity index, LAFC and the Seattle Sounders took to the field to settle an old score. Reigning MLS champs, the Sounders, had beaten Western Conference favorite, LAFC, in the 2019 final – and the sting of defeat hasn’t been forgotten.

The Black-and-Gold wasted no time pressuring the Sounders, with the first attempt falling to Mark-Anthony Kaye shortly after the whistle. Raúl Ruidíaz tried a shot from distance but fortunately, Kenneth Vermeer was there to save it in the 6th minute.

The first 10 minutes saw the Black-and-Gold create chances off deflections that forced a springy Stefan Frei off his line. Diego Palacios did well to service the ball into traffic, finding Diego Rossi and Latif Blessing from inside the box.

Rossi drew a foul after he was taken down by Sounders’ defender Xavier Arreaga inside the penalty area in the 14th minute. Jair Marrufo awarded the penalty to LAFC (eight months too late, but it was given nonetheless). A cool, collected Rossi stepped up and converted the penalty with a right-footed shot to the bottom corner to open the scoring 1-0.

Blessing, doubled the tally in the 39th minute when the midfielder’s attempt deflected off Sounders’ defender Shane O’Neill’s shoulder and into the goal putting LAFC up 2-0 just before the half.

With a halftime change for the Black-and-Gold that saw Mohamed El-Munir enter for Bradley Wright-Philips, both sides continued to exchange chances in the early minutes of the half. First, Nicolás Lodeiro held off two defenders for a through ball to Handwalla Bwana. Then Kaye tried to answer, but his attempt from outside the box missed to the right of the post.

Will Bruin, who has been out due to an ACL injury since June 2019, returned in heroic fashion to pull one back for the Sounders in the 75th minute, flicking the shot over Vermeer and into the top corner.

In the 82′, Rossi dashed the Sounders’ dreams of a comeback after sliding an easy one past Frei – recording his seventh goal of the tournament.

Brian Rodriguez added to the total with a fourth goal from 30 yards out, securing the LAFC’s ticket to the quarterfinals.

With a sweet 4-1 win under their belt, LAFC will face Orlando City in the quarterfinals on Friday, July 31st. The de facto hosts have been notorious in the league, but seem to be a new team under the direction of head coach Óscar Pareja. Is LAFC up for the challenge?