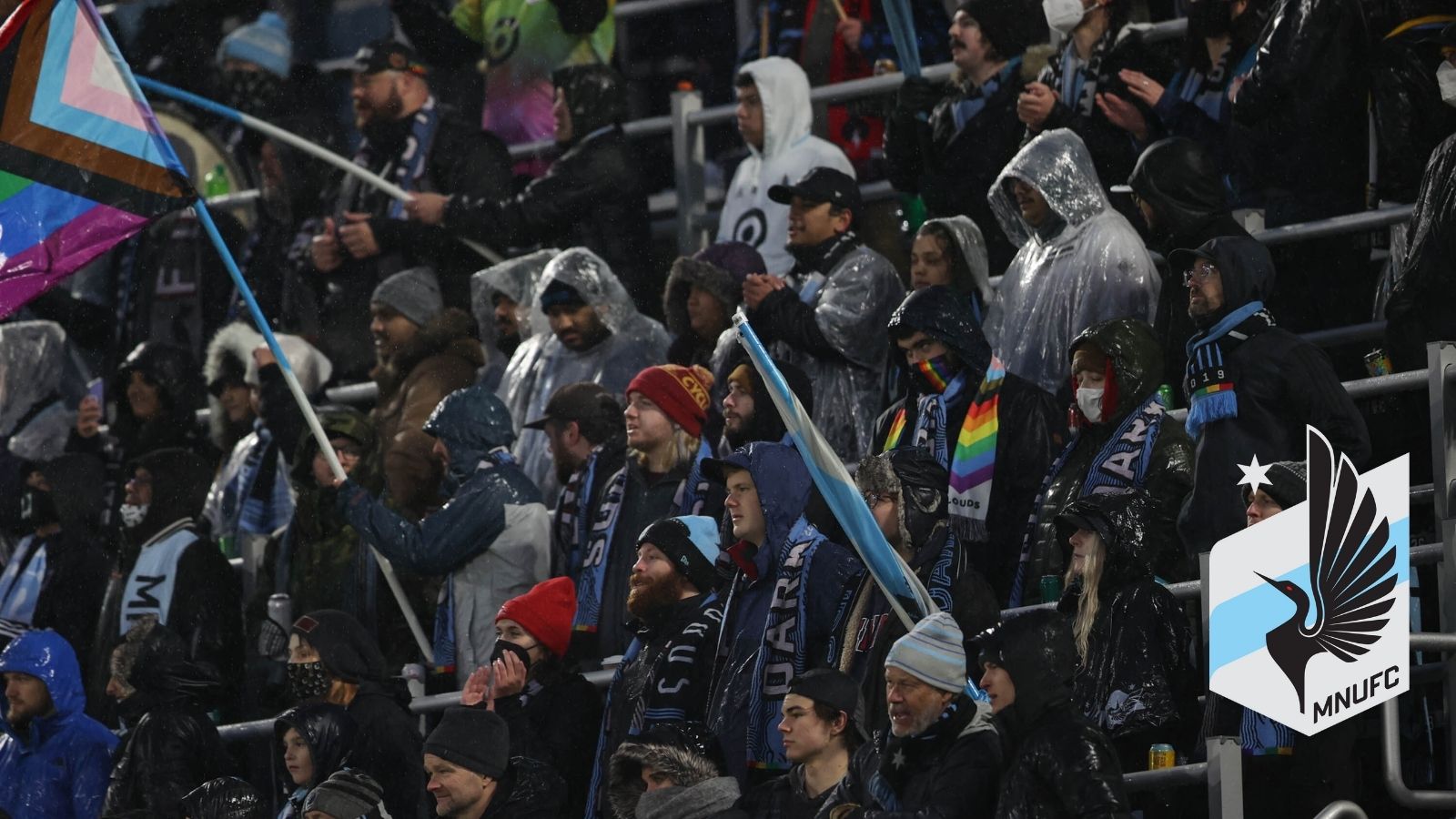 When Minnesota United FC’s home opener on Saturday evening was delayed due to lightning in the vicinity of St Paul’s Allianz Field, many fans saw a reason to go home, but others found spontaneous joy.

The Loons were down 1-0 to visiting Nashville SC in the 53rd minute. While the entrance of Bongokuhle Hlongwane and DJ Taylor at the start of the second half brought with them bright prospects, the soaking rain that fell through the first half had become torrential just before the first lightning strike, making the prospect of spending at least thirty minutes on the cramped concourse sound dismal. But many of those who stayed found ways to get warm, in body and voice, and renewed the joy of supporting the club as a group.

Members of the Wonderwall – the supporters section that integrates the Dark Clouds, True North Elite, Red Loons, Thunderwall (the drum section), and other supporters groups – congregated behind the stand, amongst the concession vendors. You have probably seen the videos on Twitter by now and may have wondered how more than 30 minutes of sheltering in place became a dance party and chant workshop. Who started it and how did it impact a cold and wet home opener experience?

“We were cold and wet and had nowhere else to go,” Adam Jarvi, a Dark Clouds capo, told Switch the Pitch. “So instead of just standing around quietly (as Minnesotans are perfectly comfortable doing) I yelled out, ‘We come from the cold and frozen north!’ and it just kind of snowballed from there.”

“All I know is how bummed we were with the weather and the delay. Next thing I know I’m in a sea of supporters,” reflected TNE capo Ellen Kokes. “What better do we do but sing? Chant? Get wild? I saw Jarvi and we just started. Or did everyone start it and we just kept it organized? I genuinely can’t remember but It was magic.”

David Vinje, a fixture in the Wonderwall, echoed that sentiment. “It’s amazing because it just… happened! The word ‘organic’ is such a buzzword but it was genuinely one of the best and most spontaneous moments I’ve experienced in the stadium,” he said. “It was euphoric! So cool to see expected, familiar faces and supporters I’ve never seen before passionately singing/chanting/dancing on the concourse.”

Jarvi saw it as an opportunity to try new songs and “teach old standards to new people.” He explained that the capos “were probably the ringleaders but many others jumped in to start songs. Eventually, it became something of an open-mic where someone would yell something out and we’d give it a go.”

And they didn’t have to keep the rhythm on their own. All three capos credit Alex McCracken of TNE for joining in with a drum from Thunderwall. “Without that, there’s no way the session becomes what it did,” Vinje said.

Robb Lauer, a co-founder and leader of Thunderwall, said the group was attempting to dry the drums and other equipment “when a handful of our loyal and fervent fans approached us to take some drums for the party that was building under the concourse. Our motto in Thunderwall is that the drums are for everyone, so we were more than happy to oblige.”

“I asked Rob if I could borrow one and then I went and plopped myself down in the middle of the concourse and just started going,” McCracken explained. “I was just kind of vibing with everyone around me and doing my best to play what people asked for and before I knew it, I realized we had the whole concourse packed and everyone was involved.”

“When that drum keeps rhythm … everyone feels it in their bones,” Kokes reflected.

Sami Banat was one of the supporters who felt that beat. After play was stopped, Banat, who described himself as a Wonderwall regular, followed the crowd to the space behind the stand. He saw the capos milling about with the rest of the supporters. When the chants started, “everyone caught on immediately and we were all singing together,” he said. “It made me proud to be a Saint Paulite seeing everyone come together so joyously in our common interest.”

“I think, if anything, the experience was a powerful reminder that ANYONE can join the fun being had in the Wonderwall,” Vinje said. “The songs were spontaneous, the group grew from one song to the next, and people were actively smiling while cold and soaking wet. It was a top moment for me as a Loons supporter.”

After two long years of arguing over pandemic reactions and precautions; on a night that saw photos and videos of horrific violence at a soccer match go viral; and after a week of seeing acts of war play hourly across our screen — Thirty minutes of pure joy amidst a bizarre March storm in Minnesota is especially appreciated and serves as a reminder of the bigger picture.

“I think being in that space during the delay reminded everyone of why we were there,” Banat explained. “Yes, because we love our team and soccer. But also because of the community we’ve formed around our team, and what it meant to be a part of that community. It certainly got folks energized.”

“It was the most I’ve seen people laughing and smiling and jumping at a soccer game here…probably ever, to be honest,” remarked Jarvi. “We need to bottle that magic and figure out how to release it more regularly.”

He continued: “I don’t think anyone on that concourse had a bad time. In fact, I think it’s already one of those ‘I was there’ moments.”

The Loons’ next match is away (at RBNY on Sunday, March 13) but they will reunite with the Wonderwall to host the San Jose Earthquakes on Saturday, March 19. You might want to be there to enjoy the beautiful noise and joy.