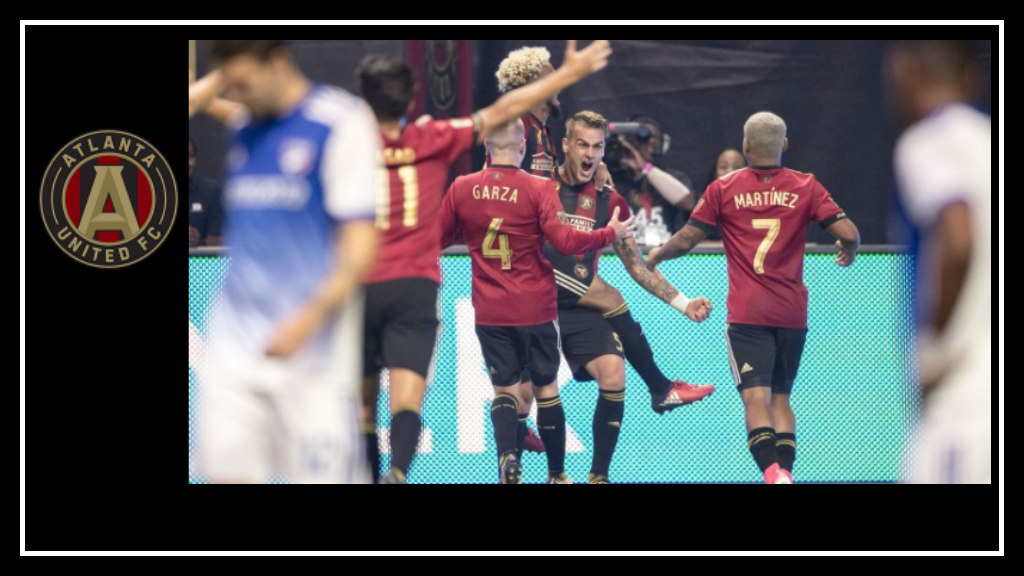 So many firsts here in Atlanta this season – and this weekend saw another one: ATLUTD’s first game in our brand-spanking-new $1.5 billion stadium. I did an Instagram takeover a few weeks ago when we were invited to preview the stadium. The stadium itself is breathtaking. The atmosphere from Bobby Dodd has definitely carried over – and multiplied – at the Benz. It is LOUD in there.

For the first game, the announced attendance was 45,314, which is on par with the numbers from Bobby Dodd. It was just announced Wednesday morning that the ATLvNE game is sold out as well, which makes it now 11 sell outs in 11 games. I had a slightly unique perspective walking into the stands on Sunday, as I was chosen to represent my SG in the Golden Spike ceremony (a rep from each of the four recognized supporters groups carries the spike in before every game). Below is a video taken by one of the other reps – that’s the back of my head at the front left of the spike.

The key thing about the field at the Benz is that it’s longer and wider than the field at Bobby Dodd (70×110 > 75×115). 25 square yards doesn’t sound like much, but it may have made the difference on Sunday for ATLUTD. Our midfielders (Tito Villalba and Yamil Asad) and defenders (Greg Garza and Anton Walkes) on the sides had more room to make runs up the wings, creating more chances and getting more results.

Speaking of Tito…have a game, kid! He was definitely back on track this week, with assists on two of three goals and a few shots on goal himself. The first assist was a header from a short corner that fell to Leandro Gonzalez Pirez, who just got a touch on the ball that slowly crept into the net behind FC Dallas goalie Jesse Gonzalez. It was Pirez’s first goal for ATLUTD, and the historic first goal in the Benz. It also reminded me a lot of the first goal of the season for ATLUTD that was scored by Yamil Asad.

The second goal happened so quickly after the second half started, I almost didn’t catch it. Not thirty seconds into the half, Almirón got the ball to Josef Martínez, who scored his first goal since July 4th.

What a goal to put #ATLUTD up 2-0 pic.twitter.com/4HS6fabjcJ

Greg Garza scored his second goal of the season in the 68′ when Almirón passed to Martínez, who stepped over the ball, bringing a Dallas defender with him, and clearing the way for Garza to tap it into the net behind Jesse Gonzalez.

Both goalkeepers had great games, too. Guzan ended up with the clean sheet, but Jesse Gonzalez had some spectacular saves (and was saved by the crossbar a couple of times). Matt Hedges had Gonzalez’s back once in the first half and cleared a ball right at the goal line.

Coach Tata Martino said after the game that it was the team’s best game of the season, and I agree. After a month of long breaks and poor showings, the game the boys played on Sunday was exactly what we all – the team and the fans – needed, especially with the number of games we have in the next few weeks. If they can keep performing like they did against Dallas, getting into the playoffs will be a piece of cake.

Our next game is Wednesday against New England Revolution, who we have not played yet this season, and we’ll play them again at the end of the month. Saturday, 9/16, is the Big One, though. Our final game against Orlando City this season, in front of a record-setting regular season MLS crowd of 70,000+. I will most likely be doing another IG takeover, so go follow the MLSFemale account!