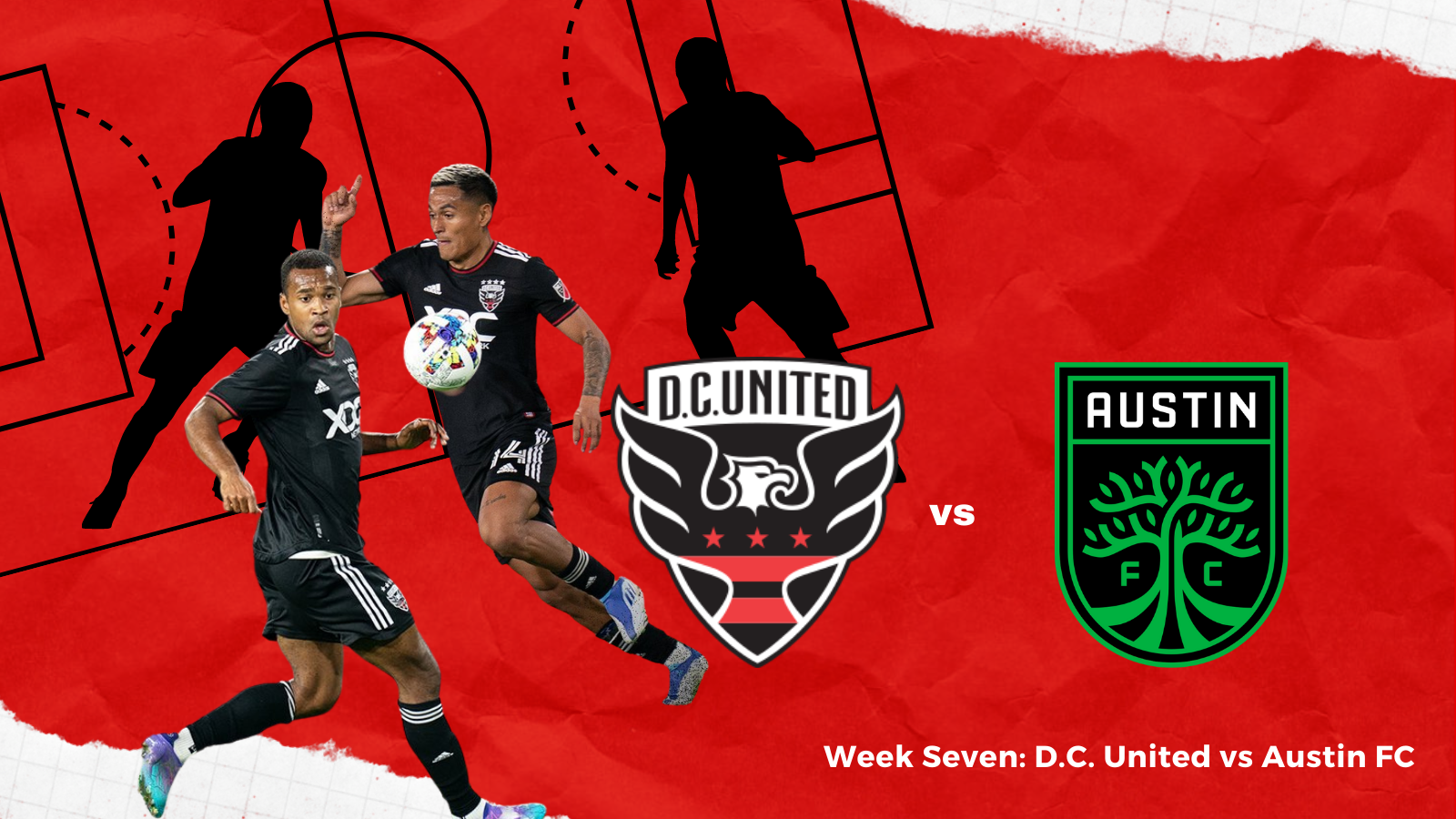 After a dominant first half, D.C. United’s Ola Kamara was ejected for yellow card accumulation (and a brace), opening up the opportunity for Austin FC to nab all three points in a physical 2-3 match.

Welcome to MLS, An Act in Two Parts

Expansion side Austin FC had never faced one of the original MLS clubs – until this Saturday. After a half-hour weather delay due to thunderstorms in the D.C. metro area, it was time to get the show started, and what a show it turned out to be.

Two weeks after their last home match at Audi Field, D.C. United began Saturday night fresh and dominant on the pitch. It was clear from the first whistle that the Black-and-Red were prepared to take all three points and entertain their supporters. With newly signed international player, Taxi Fountas, on the evening’s roster, all seemed well in hand for an exciting night.

In the 8’ Ola Kamara sliced a clean shot in from the right side of the box but was found to be offside even after VAR review. New signing, homegrown Jackson Hopkins, looked dangerous as he carved his way through Austin’s defense to set his teammates up for a chance on goal. Not content to leave a chance on the table, Andy Najar wove through a sea of green, trying to get a look at the back of Brad Stuver’s net.

Not to be left out of the fun, Maxi Urruti set Bill Hamid up for a risky challenge, going one-on-one with the stalwart goalkeeper in the 15’. Thankfully the final shot was skied.

The Black-and-Red continued to press and made their way through Austin’s backline for several dangerous chances. Hopkins, Kamara, Najar, Russell Canouse, and Nigel Robertha all tested a leaky Austin backline, but veteran goalkeeper Stuver wasn’t about to let D.C. nab an early advantage.

Ola Kamara found his opening in the 26’ putting just the right amount of spice on a beautiful ball from Andy Najar. Firing through traffic, Kamara’s clinical shot found its way past Stuver to put D.C. in the lead. He was promptly booked with a yellow in the 27′ for removing his shirt in, “excessive celebration.”

Austin wasn’t about to leave the challenge from D.C. unanswered. Diego Fagúndez found an opening to slip a shot past Bill Hamid, but he was well offside. VAR promptly called back the awarded goal, keeping the Black-and-Red ahead.

Not satisfied with a single goal lead, Kamara went for a brace, taking advantage of Julian Gressel’s impeccable service off corner kicks to find a way yet again past Austin’s backline and Stuver.

Nigel Robertha was shown yellow in the 41’ after a hard collision with Brad Stuver right outside the box. Both players had to be attended to by training staff but played on. Austin had their own flurry of chances, but Maxi Urruti and Sebastián Driussi both were unable to convert.

It looked like Julian Gressel would find his own goal in the 45’+4’ as he attempted a header in front of goal. Unfortunately, Gressel’s shot went wide.

Then, disaster struck. Kamara saw a second yellow in the 45’+7’, and an ejection from the match, after a tangle with an Austin FC player vaulted them both over the end line. D.C. would have to play on with 10 men.

Heading to the locker room ahead by two should have set the Black-and-Red up nicely for the second half, giving them a safety net to continue pressing Austin. However, the ejection of Ola Kamara from the match due to yellow card accumulation left D.C. in a precarious position indeed.

Rain poured down at Audi Field right after the second half kicked off, setting an ominous tone as D.C. took the field with ten men. Andy Najar, who had been having a stellar evening, went down hard and had to be attended to by training staff. Najar was quickly replaced by Chris Odoi-Atsem in what is hoped to be a move made for the sake of caution.

For the Black-and-Red, it turned into a dual-fronted effort to both keep Austin at bay and to avoid injury.  Odoi-Atsem didn’t stay on the pitch long, with Samaké replacing him in the 58’. Also taking the field was Taxi Fountas, D.C.’s long-awaited international star. Fountas replaced Robertha in the 58’.

Donovan Pines took a shot from the center of the box in the 71’, assisted by Fountas during a set piece, but the shot was just too high. Former D.C. player, Felipe Martins took his own chance in the 77’, testing the waters against past teammate Hamid.

Following a set piece, Austin’s Danny Hoesen took advantage of a cross from Fagúndez and found an opening in traffic enough to scoot a ball past Hamid and score his team’s first goal of the match. Sebastián Driussi followed Hoesen’s lead in the 85’, scoring from the left side of the box. Another shot from Hoesen glanced off the woodwork but was a harbinger of what would come next.

In the 90’, Ruben Gabrielsen scored Austin’s third goal of the match with a header from the right side of the box following a corner kick. Once again, the dying moments of the match would seal D.C.  United’s fate, costing them points at home.

D.C. United move on to play their next round of the Lamar Hunt U.S. Open Cup against Flower City Union on Tuesday, April 19 at 7 pm EST at Marina Auto Stadium in Rochester, NY.