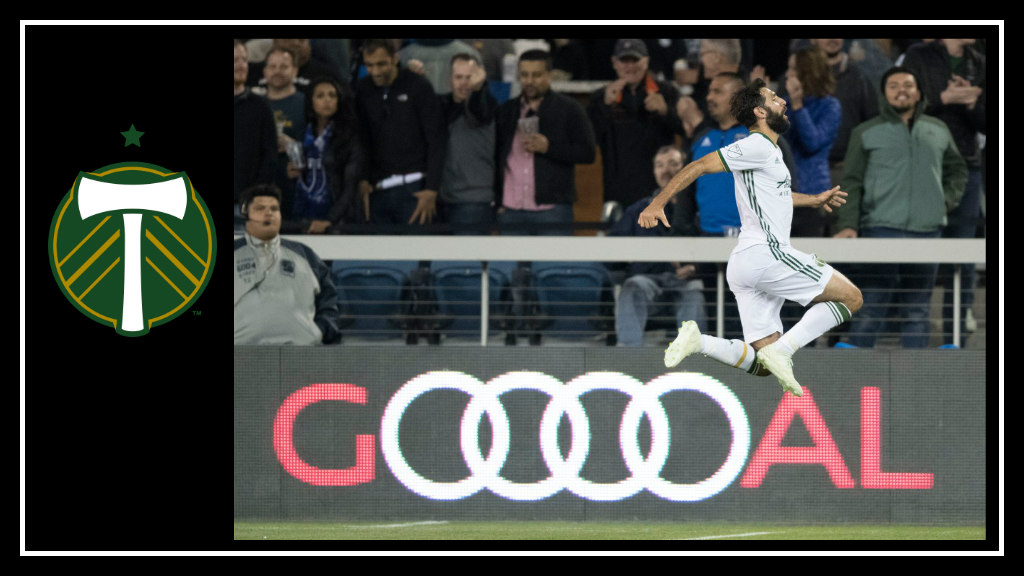 For the first time since the move out of Buck Shaw, the Portland Timbers defeated the San Jose Earthquakes 1-0 at Avaya Stadium on Saturday, putting Portland on the good foot heading into next weekend and hopefully reclaiming once and for all any reference to the Goonies by our neighbors to the south. It was an evenly contested match, but Diego “El Maestro” Valeri had the last word, bending a beautiful free kick into the top right corner of the net at the 88th minute, sending the Timbers Army away fans home happy, and bringing back three points for the boys in green (okay, technically, the kits were white, but you know what I mean).

The Timbers went into this game in a 4-3-2-1 formation, with a lineup much like the one that proved successful against Minnesota United. After a dominant performance against New York City FC, Jeff Attinella was back in the starting spot in goal and Liam Ridgewell was once again in the starting XI; but other than that the lineup looked pretty much like the one that we saw in our home opener against the Loons.

The first 15-20 minutes the Timbers looked to have the game well in hand, with most of the possession and with Alvas Powell tearing up and down the right sideline like he owned the place. At the outset, it was almost a three-man backfield as Alvas time and again charged forward with pace and control.

It wasn’t until about 25′ when the Earthquakes’ Nick Lima hit a cross that turned out to be more like a shot on goal, that the momentum seemed to shift. Fanendo Adi had a couple of decent chances, but between his 8′ shot off the post, his 11′ mishandling of a pass from Valeri in front of the goal, his miss at 22′, it just wasn’t his night.

In the second half, both teams had their share of chances. Danny Hoesen made Attinella work hard to keep a clean sheet, and Valerie Qazaishvili had a couple of beauties blocked as well. In the end, though, it was Diego Valeri’s free-kick a couple of minutes before stoppage time that made the difference, and the Portland Timbers continued their slow climb out of the cellar in the West:

Spotlight on Paredes. Once again, midfielder Cristhian Paredes continues to impress me. Take a look at his distribution yesterday:

See all of those green arrows? Those are successful passes and crosses. See how many unsuccessful passes/crosses he had all game? Three. David Guzman has some very healthy competition for that deep midfield pairing with Diego Chara. Frankly, if Paredes keeps it up, that other D-mid starting spot might just belong to him, regardless of when Guzman is healthy again.

Powell continues to demonstrate maturity and poise (what?!?). I already mentioned that Powell looked like he owned the right side of the field in the opening quarter of the game. I am also impressed that he is managing to keep his head. In a game where no fewer than five Timbers received yellow cards, it is noteworthy that none of the yellow card recipients was named Alvas. Keep up the good work, young man.

Armenteros is a savvy player. Take another look at that free kick by Valeri that ultimately proved to be the game-winner. Let’s note, first of all, that Samuel Armenteros was the one who got the foul at the hands of Anibal Godoy. While it is true that this wasn’t the worst offense I’ve ever seen called for a foul, Godoy MORE than had it coming to him, as he had already built up a reputation with the referee by repeatedly plowing into players from behind, finally earning a yellow card after about the fifth offense. Armenteros wisely made the contact evident to officials and earned a free kick in a dangerous spot.

Then there was the free kick itself. Both Shea Salinas and Magnus Eriksson are initially tight on Armenteros, presumably because of the threat he may pose on cleaning up any deflected shot. Take a look at what Armenteros does with them in the wall here:

Armenteros turns from striker threat to offensive lineman, using some impressive blocking to clear a wide space in the wall for Valeri, should he need to use it. As it turned out, of course, Valeri curled the ball high and tight in the corner; but Armenteros was ready to ease the path for him, just in case.

I would love to see Armenteros get significant minutes so that he can find on-field rhythm with Valeri and Sebastian Blanco; it has to be hard to do when you only have a few minutes at the end of a game to sort it out. Adi may be working hard, but I don’t see that much production from him yet this year. We have healthy competition for starting spots in a few roles; I wouldn’t mind seeing a bit more of that mentality at the striker spot.

The only injury of note the team seems to have suffered was at Zarek Valentin‘s expense, apparently from overexuberant goal celebration with teammates (no, really). Fortunately, he was able to get back into the game in the final minutes while sporting a hefty bandage. He seems to be on the mend:

Next week, the Timbers are back home to face our hated rivals, the Seattle Sounders on Sunday, May 13th.