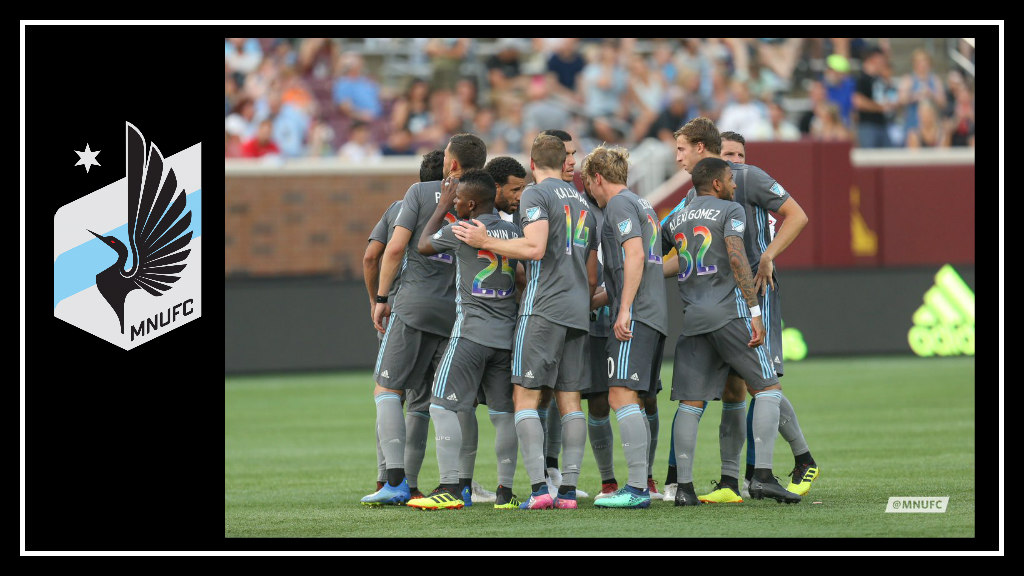 Minnesota United’s last two matches are about as ridiculous a juxtaposition as I have ever seen between two performances with the same result. The first appeared an easy win on paper, but in reality, while allowing the brightest ‘up-and-coming’ names to make their case, tested the Loons’ grit and the coach’s tactics. The second matched a daunting foe with a depleted side in a new formation. Opportunities mounted, celebrations sparked repeatedly and….

And nothing. The Loons have nothing to show for it.

United played perhaps its most passionate game of the season in Colorado last Saturday and throngs of away fans were there to disrupt the home sides’ broadcast mics for the whole show. And both sides did put on quite a show. The Loons struck first. When Rapids keeper Tim Howard blocked Darwin Quintero’s tap-in, he sent it spinning just off his line. Few players on either side reacted quickly, but United midfielder Miguel Ibarra rushed the box and launched both the ball and himself into the back of the net to put the Loons up 1-0.

Colorado wouldn’t answer until the second half, when Edgar Castillo sent one past Bobby Shuttleworth to tie it up in the 50th minute. Fifteen minutes later Christian Ramirez tapped one in, assisted by Ibarra and Quintero, to regain the lead. For nine minutes, it appeared the lead may hold, that the Loons could hold them off, but Shkelzen Gashi and Danny Wilson worked the gaps to set up a beauty from Joe Mason. 2-2, in the 74th minute. Then disaster.

Ibarra, attempting to take the ball from Joe Mason of the Rapids for quick restart, appeared to (from the official’s perspective) take a swing at Mason’s head. Ibarra was shoved to the ground by Jack Price and further agitated. As his teammates ran to his defense, Ibarra was shown red. Ejected.

And Miguel is shown red

We'll play with ten men for the rest of the match

The ten-man side looked dejected as they fought to maintain a one-point result away. The Loons gutted it out for thirteen minutes and both sides showed some, um, passion as they defended their goals at all costs. But grit and passion weren’t enough for United.

Cue fan anger. The sentiment #HeathOut, having grown from an occasional addition to banter to the first reaction of many fans on Twitter, spawned an account with the handle @HeathOut. Since that match, Is Heath Gone Yet? has tweeted every day, just a word or two each denoting the gaffer’s status: ‘Nope.’ ‘Naw.’ ‘Nein.’ ‘Nuh uh.’ ‘Nopers.’ Of course, there’s always this positive outlook: They didn’t give up a goal in the opening ten minutes.

Ahead of Minnesota’s home game against FC Dallas on Friday, the account posted, “Not today. Maybe Tomorrow.”  Present and accounted for, Heath rolled out a different formation of depleted Loons that offered hope for goals against a strong Dallas side. The 3-5-2 pulled one defender, Tyrone Mears,  forward into the midfield, which has leaked like a sieve all year.

Mears played right wing opposite Alexi Gomez, freeing up Ibson and Rasmus Schuller (usually the two in Heath’s 4-2–3-1) to track forward and back without leaving too much room for a Dallas counter. With these box-to-box roamers behind an attacking duo of Quintero and Ramirez, what could go wrong?

Against the Rapids, the Loons were efficient with their shots. Out of twelve total, eight were on target, two of which found the net. Taking note of the Law of Averages, the Loons peppered shots into the Toros’ box. But only five of their fifteen shots were on target.

Schuller nearly had a highlight reel screamer, but it curled wide. Ibson sent two brilliant shots wide. Ramirez sent a few wide, failed to connect on the end of others. Quintero went wide. It was as if the humid haze above the artificial turf created a force field between the sticks. As if a rifle shooter neglected to zero in his scope, shot after shot.

But they had plenty of set pieces to fall back on. Even a team notoriously poor with set pieces should find the Law on their side given enough opportunities. Right?

Let’s do a word problem

This English major comes up with 4.33 goals for United on paper. On the pitch, the Loons came up with zero.

And so, despite again not allowing a goal in the first ten minutes, the Loons lost another.

But the supporters sweated it out with them. It wasn’t just any hot and humid game night. It was Pride Night and the club was celebrating one of its own.

Midfielder Collin Martin came out publicly on Friday morning, the only active pro athlete to play openly as a gay man.

Tonight my team, @MNUFC , is having their Pride night. It’s an important night for me — I’ll be announcing that I am an openly gay player in Major League Soccer. #soccerforall pic.twitter.com/cOJQXfrBiv

In an impromptu discussion with media before the match, team owner Dr. Bill McGuire was asked if there was anything political to be inferred by the announcement.  “This is a human statement,” he replied. “Not a political one.” In subsequent interviews, Martin noted an overwhelmingly positive response.

The Loons may have lost the match, but Collin Martin (a player who didn’t even see minutes on Friday), with the club and supporters behind him, won the night.