MLS is Back, Semifinal 1 of 2: Portland Defeats Philadelphia, Advances to the Final 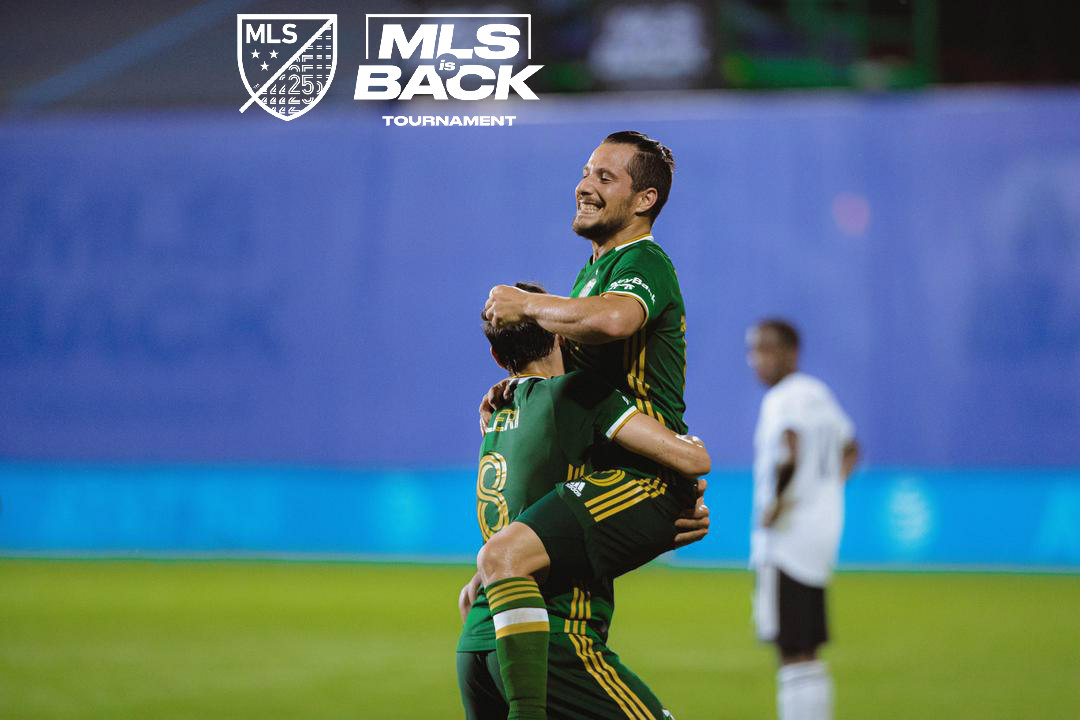 The Portland Timbers scored first and controlled most of the match, and the Philadelphia Union scored late and threatened to come back. But the Timbers were able to hang on and finish the game out, defeating the Union 1-2 on Wednesday night and advancing to the final of the MLS Is Back Tournament in Orlando, Florida.

The Timbers were the first to get on the board. In the 13th minute, PTFC’s Diego Valeri sent a corner kick into the box, where he found Jeremy Ebobisse, who had shaken Union defender Kai Wagner. A well-placed header from the striker drove the ball into the ground out of reach of Andre Blake, bouncing it up to the back of the net.

Toward the end of the first half, Philadelphia had an opportunity to equalize when Jamiro Monteiro beat Portland’s Sebastian Blanco in the box, and the ensuing foul led to a penalty kick. Fortunately for the Timbers, the Union sent Sergio Santos to the line. Santos’s shot was high and wide to the right, and the Timbers took their 1-0 lead into the locker room.

In the second half, the Timbers were again successful. While Philadelphia had the lion’s share of the possession, the Timbers were able to capitalize on another of their chances in Philadelphia’s half of the field. In the 70th minute, after Dario Zuparic headed a Valeri kick, Sebastian Blanco took the ball and buried a bouncing header for the Timbers’ second score of the night.

Philadelphia made it interesting toward the end of the game. They had a chance to score in the 80th minute, when Kacper Przybylko’s left-footed shot from the center of the box was saved by Portland’s Steve Clark. A few minutes later Philadelphia got on the board. Jamiro Monteiro’s free kick was initially saved by Steve Clark, but Andrew Wooten cleaned up the rebound to put it in the net for the score. Then in the 86th minute, Brenden Aaronson drove the ball into the box and Przybylko put it into the back of the net, potentially tying up the game, but the offside flag went up and the goal was disallowed. It was close, but at the final whistle Portland had maintained their lead, winning the match 2-1.

Philadelphia hot take: Andre Blake is the Union’s tournament player of the match–and that probably isn’t a good thing. Blake has been outstanding in Florida, continuing his consistent, excellent tournament play in this match, with 5 saves in the game and 16 total in Philadelphia’s three knockout games. In the end, though, his stops weren’t enough to keep the Union in the game, because the offense wasn’t there to carry their share of the load. In the first half, Blake had more passes than Kacper Przybylko, Sergio Santos, and Brendan Aaronson, Philadelphia’s entire offense. Until the final few moments of the game, the Union didn’t look threatening, despite their advantage of possession. Fixing the ability to finish the opportunities up front would make Philadelphia a solid team and a formidable foe.

Portland hot take: Hey, how about those Timbers offensive threats? Sebastian Blanco is PTFC’s tournament MVP, with either a goal or an assist to his credit in 8 of the Timbers’ 12 scores so far. Jeremy Ebobisse has similarly been lethal in front of the net throughout the tournament. And new signing Jaroslaw Niezgoda has showed his quality, with deft touches on the ball and involvement in goals and assists whenever he’s had the opportunity to be on the pitch. Portland seems to be using multiple, complimentary offensive weapons effectively; they’ll just need to be able to close out the game in the final. The Timbers cannot afford to let their opponent back into the match in the waning moments, as they did on Wednesday.

The Portland Timbers face the winner of the August 6th semifinal between the Orlando City SC and Minnesota United on Tuesday, August 11th, at 5:30pm PDT.