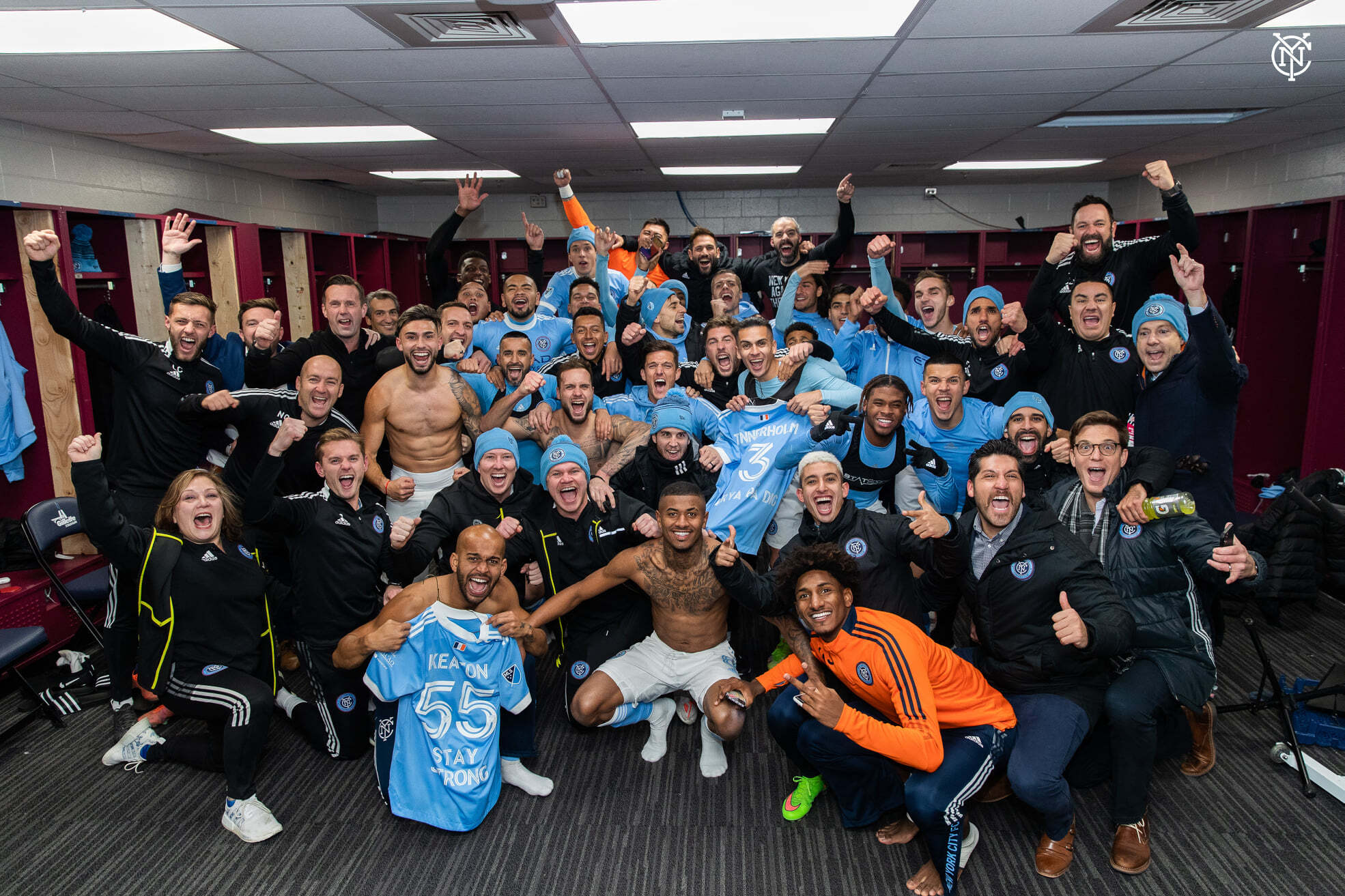 It was 12 noon on Tuesday following Thanksgiving weekend and droves of people donning sky blue gathered at Yankee Stadium. There, three busses completely full of traveling supporters chartered by the Front Office of NYCFC were preparing to depart for Foxborough, Massachusetts. NYCFC was scheduled to play one of the best teams MLS had ever seen, the New England Revolution. Despite the odd scheduling and a three-and-a-half hour commute one-way (not including traffic) on a workday, NYCFC saw over 800 supporters make the trip up to Gillette Stadium.

New York City FC is no stranger to the MLS playoff semifinals. NYCFC’s first year playing in MLS was 2015 and they failed to qualify in the playoffs. Since then, the club has qualified every year. In 2016, they played against Toronto FC, losing 7-0 on aggregate and crashing out of the playoffs. In 2017, they again qualified for a top seed. Traveling to Columbus for the first leg of the two games saw them lose 4-1. Despite winning 2-0 at Yankee Stadium for the second leg, Columbus Crew advanced on aggregate goals. 2018 saw New York City finish 3rd in the East and advance through the knockout round, besting Philadelphia Union 3-1. Back in the semifinals, NYCFC could not respond to Atlanta United (who went on to win the MLS Cup that year) and lost once again.

2019 was the year that those who have supported New York City FC felt would be *the* year for the club. Head Coach Domènec Torrent led City to their best regular season performance in club history, finishing first in the East with 64 points. The club qualified for the CONCACAF Champions League. The players had great chemistry. Héber, Alexandru Mitriță, and Valentín “Taty” Castellanos all accumulated double-digit goals in the regular season. The team entered Citi Field on October 23, 2019, ready to break the curse of never advancing beyond the semifinals.

For those who don’t follow NYCFC, there still is a good chance you know what happened that night. In the 90th minute, NYCFC defender Ronald Matarrita made a dangerous sliding tackle in the box in what has probably been the moment that haunts NYCFC players and supporters alike the most. A penalty kick was granted and it led to Toronto FC defeating New York City FC 2-1. I cried in the stands for fifteen minutes following the final whistle of that match.

Coming off a strong 2-0 victory against Atlanta United last week, New York City FC felt confident they could challenge the Revolution. Three minutes into the match, NYCFC midfielder Santiago Rodríguez scored the opening goal with an assist by the Bronx’s very own, Tayvon Gray. The excitement was quickly extinguished when New England’s Adam Buksa netted his own goal, equalizing the game in the ninth minute.

The remaining 80 minutes of the match saw both teams vying for a moment that would send them through to the Conference Finals. New York City attempted 16 shots versus New England’s 15. They both had four on target. Defensive players on both sides made daring tackles to halt approaching plays. A few yellow cards were seen here and there, including one given to NYCFC’s Taty. NYCFC had numerous promising moments in front of goal that players were unable to finish. The final whistle saw the two teams finish regulation time tied 1-1.

Extra time saw much of the same action until finally, in the 109th minute, NYCFC’s Taty flew through the air to redirect midfielder Gudmundur Thórarinsson’s late cross past New England (and USMNT)’s goalkeeper, Matt Turner. Taty was seen leaping over the barricade and celebrating on the side of the field with his teammates. NYCFC supporters were heard screeching from sections 217 and 218.

Unfortunately, it appears that NYCFC refuses to do anything the easy way. Two minutes after netting the go-ahead goal, Taty slid into New England player Brandon Bye with a late tackle, missing contact on the ball and scraping Bye’s cleats. Bye collapsed to the ground and Taty was shown his second yellow of the match, expelling him from the remainder of the game. Boos erupted from the New England supporters as Taty refused to leave the pitch. Matt Turner was seen rushing over and shoving Taty to encourage him to leave faster.

Down to ten men (basically nine as NYCFC’s defender Tayvon Gray was observed limping a fair amount during extra time), NYCFC could not hold the line against New England’s offense. With two minutes left in extra time, the Revs’ Buchanan was left unmarked on the back post and was able to equalize the game yet again. Extra time ended with the teams equal at 2-2.

Flashbacks to the last five years of playoff performances invaded the minds of NYCFC supporters around the world. Some in attendance at the game were observed facing away from the field. Others left the area to go hide and avoid the embarrassment of losing yet another game in penalty kicks. Former NYCFC defender Sebastian Ibeagha tweeted that he was pacing his living room. No matter where you were, the feelings were all the same. We were worried.

What transpired came from the wildest of dreams. NYCFC midfielder Alfredo Morales approached the spot first. The wall of Revolution supporters roared to life behind goal. Morales confidently finished his shot and put NYCFC up 1-0 in the penalty kicks. New England’s Carles Gil also scored his. Thiago Andrade strolled up to the spot and calmly scored the next goal for NYCFC. Next up, Adam Buksa, New England’s top goalscorer this season approached his ball, ready to score another for the Revolution. NYCFC’s goalkeeper Sean Johnson said otherwise. Johnson read Buksa and was able to make the save in the bottom left of the goal, giving the Boys-in-Blue the advantage.

Long-time missed striker Ismael Tajouri-Shradi (who has been recovering from injury) was the third to shoot for NYCFC. He was also able to beat Matt Turner to keep NYCFC up 3-1. Teal Bunbury made it 3-2. In the 4th round, NYCFC midfielder Maxi Moralez began walking to the penalty box. Maxi’s penalty kick record with NYCFC is not great (5 makes and 6 misses). Numerous missed shots have haunted Maxi and the club in several important matches. With a deep breath, Maxi made his run toward the ball and saw it hit high in the back of the net. His goal kept NYCFC ahead of New England.

New England’s Jones calmly kept New England alive by beating Johnson during his shot. Finally, NYCFC defender Alexander Callens approached the spot. Callens had just scored a goal in the previous game against Atlanta United to send NYCFC through to the semifinals. Now, he had a chance to send City to the Conference Finals for the first time in history. Supporters in the stands held their breath. Revolution supporters did everything they could to distract him. Callens jogged forward and buried the ball into the back of the net.

Players and coaching staff swarmed the field. NYCFC supporters shrieked and showered each other in leftover beer. Supporters watching from home woke up neighbors and their children. Scott Collins reported that he and his wife Samantha were watching from their local spot in Indiana, two of the remaining people in the bar. He nearly flipped the table in celebration.

So much pain and sadness from the last five years of supporting this team evaporated in a moment. So many bad memories and arguments over #DeilaOut or #DeilaIn were forgotten. For now, we can finally say our team accomplished something. Fun fact: Let it be known that Ronny Deila now holds the highest percentage of wins in all of NYCFC’s coaching history. Thank you for proving me wrong and reminding me why I’m not a professional coach.

Angel Meza, Vice President of the Third Rail Bronx was in attendance at the match. He stated after the game, “Johnson making that save was critical to us winning that penalty shootout. Having the advantage gave the remaining players the confidence to make a bit of a riskier shot. They think, ‘Oh if I miss, we’re still even so it’s fine.’ and that mentality is what finally sent us through our first penalty shootout.”

I took to Twitter to gather what this victory meant to NYCFC’s supporters. “Growth, a new sense of hope, and everything,” were some of the responses. Justin (@thentherewasj) says, “Imagine losing in the 1st round so often that you don’t even get your hopes up anymore. Imagine being a founding member season ticket holder and not even getting excited for the playoffs cause we’ve always gone one-and-done. Then this team of scrappy players goes under the radar and make me love again.”

Felix Palao serves as a member of the board for Third Rail and is president of the Bronx chapter. “I really broke down several times. With Diane, Alexis and Christian, and Sanchez, just saying that I wasn’t supposed to be here. While I was in the hospital, I dreamt of nights like these. It kept me fighting. I almost died. It meant the world to me to be there.”

It all comes together on Sunday, December 5, at 3 pm. New York City FC will travel to Subaru Park to face off one more time against the Philadelphia Union in the Eastern Conference Finals. For glory or for pain, we will be behind you all the way. Thank you for giving us your all.

Feature and all other images: NYCFC

A Well-Fought Effort but No Points For D.C. United Against First-Place New England