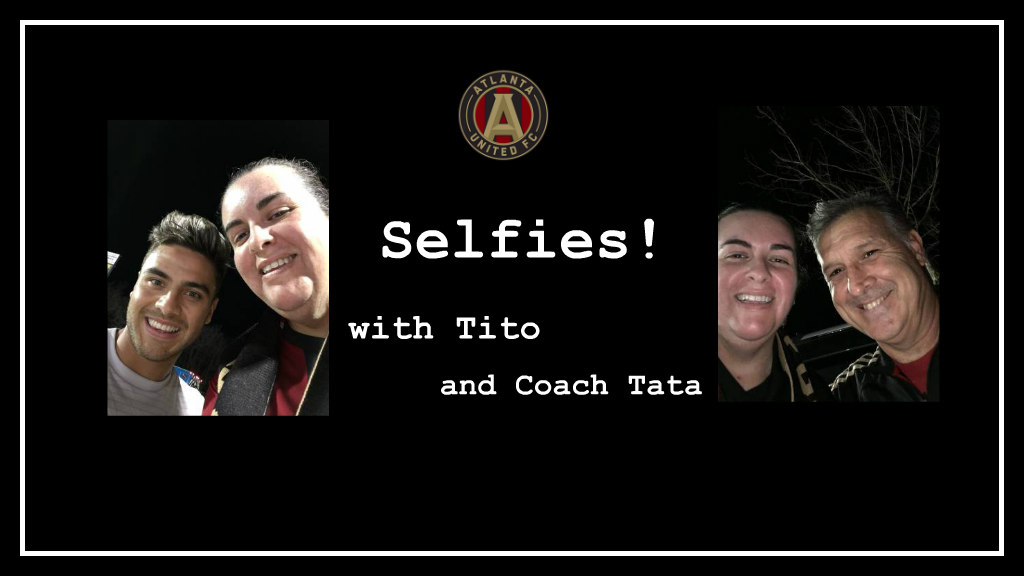 Way back in October 2016, it was announced that Atlanta United would participate in the 2017 Carolina Challenge Cup hosted by the USL side (and ATLUTD affiliate) Charleston Battery. Minutes after the announcement, I booked two hotel rooms in Mt. Pleasant, SC for each weekend of the tournament for me and my friends. At that point, the team had fewer than 10 players signed, I believe, but that didn’t matter. Any excuse to go see our team play as early as possible!

I drove the four and a half ours out to Charleston on Friday, February 17th, and met up that night with some friends who had also driven in from ATL and surrounding areas. The next morning, after brunch with my soccer besties, we drove out to Daniel Island for the tailgate and game. By the time we got there around noon, the tailgate was just about in full swing. All of the Charleston and Atlanta supporters groups were next to each other, sharing beer and food and getting hyped for the game.

ATLUTD vs Columbus Crew was the first game of the tournament. Fresh off that 4-0 win in Chattanooga, the fans were feeling really optimistic about our chances in the tournament. Atlanta went up 1-0 on a diving header by Josef Martinez in the 6th minute and kept the lead going into the half. A lot of the talk at halftime was that the ATL side was looking really tired towards the end of the half. There was concern about them being match ready for the rest of the week and for the season opener. In the second half,  Columbus’ Federico Higuain scored a brace, to hand ATLUTD their first (and only) loss of the preseason.

I won’t lie, it was a huge bummer, but we knew it was going to happen eventually. Fortunately, it was only preseason. And we stuck around for the second game to watch the Battery take on the Seattle Sounders. I ended up going to the pub in the stadium for some food and missed the Seattle goal, but went back out for the second half and watched the Battery score a goal at the death to get a draw against the reigning MLS champs, which was pretty amazing.

The second round of games were on Wednesday, so I wasn’t able to attend in person, but I went to a watch party at Fado Buckhead to cheer on our boys with 50 or 60 other fans in the corner of the bar. We had no sound, but as long as the game was on, we were good. ATLUTD put out their starters and Seattle fielded their B team and trialists. By the half, the score was 3-0 in Atlanta’s favor; Martinez got his third goal of the preseason, Miguel Almiron scored on a PK after Julian Gressel was pulled down in the box, and Hector “Tito” Villalba scored a lovely goal that flew right through the Seattle goalie’s legs. In the second half, Martinez scored again to bring the score to 4-0 and the fans watching from ATL were freaking out. Not long after that last goal, Seattle brought in some of their starters and scored 2 goals, bringing the final score to 4-2 in favor of Atlanta.

The following Saturday, I was back on the road to Charleston to catch the last two games of the tournament. The current standings had Columbus in the lead with 4 points (they had tied with Charleston in the early game on Wednesday), Atlanta in second place with 3 points, Charleston in third with 2 points, and Seattle in last with 1 point. If Seattle managed to win or draw with Columbus and ATL beat Charleston, our boys would take home their first trophy. Unfortunately for ATL, Columbus beat Seattle 1-0 and took home the CCC17 trophy. Still, we had second place to fight for!

ATL started a very different line up for this final game. Mostly the B team, with Yamil Asad up top and Andrew Carleton in midfield. Asad scored on a header just over three minutes into the game with an assist from Mikey Ambrose. Just before the end of the half, Romario Williams (an ATLUTD player playing for Charleston) scored a stunner from about 20 yards out and tied the game. The second half was pretty well dominated by ATL – Carleton was a force to be reckoned with – but it wasn’t until subs Almiron, Parkhurst, Larentowicz, and Villalba came on in the last ten minutes of the game that we saw another goal. In the 90th minute, Villalba nabbed a cross from Andrew Wheeler-Oniunu and fired it past Charleston’s keeper, earning Atlanta second place in the tournament.

The best part of the weekend was just after the game when the players came over to our section to say thanks, sign autographs, and take pictures with the fans. I finally got my selfie with Tito and he signed my jersey (which already has his name and number on it). He also asked me where I was from, which confused me until I realized he was pointing to the Argentinean flag I was holding. I told him in my not-so-great Spanish that my father is from Argentina. I also got selfies with Parkhurst and Asad and later one with Coach Tata Martino in the parking lot when we kind of ambushed him. We also briefly saw club president Darren Eales and Technical Director Carlos Bocanegra as they were leaving. I didn’t even have words for how excited I was that we were eight days away from our first season opener.

And now it’s less than a week. I am still at a loss for words. Hopefully I’ll find some soon for my next article! See y’all then!