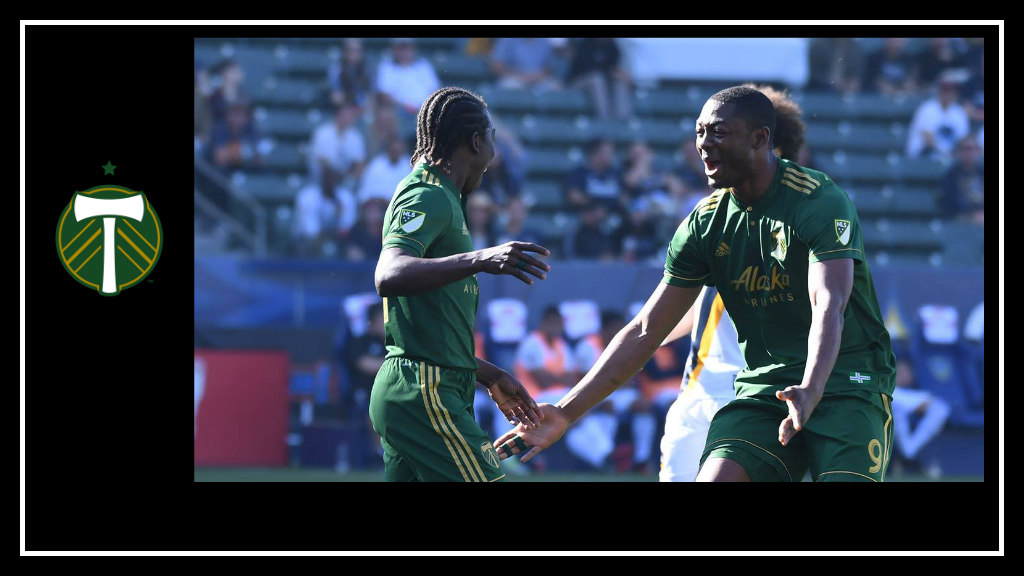 Week two, and time for our first road game of the regular season, this time against the Los Angeles Galaxy. Last week’s home opener/smackdown was delightful, but what did we have in store today? With an already thin back line plagued by injuries midweek, I wasn’t sure what we were going to see. Would the dazzling offense put on another show? Or would we continue our road woes of 2016?

All the Diegos. People say “box to box” all of the time like they know what it means. I have only been closely following this sport since maybe 2003 and I hear that term thrown around a lot. Today Diego Chara put on a box-to-box clinic at StubHub Center. The last time Chara’s head was involved with a score, also in Carson, it inspired this wonderfully unique tribute video by the Tokyo contingent of the Timbers Army, Tokyo Yosaku. This time, Chara started the run behind his own six and sprinted downfield. As Sebastian Blanco made a long, beautifully chipped aerial pass, Chara barely broke stride as he headed the ball expertly to Diego Valeri on the left, who graciously squared it back to Chara for the score. I could watch this perfect sequence all day. Way to go, Diegos.

Sebastian Blanco. He is indeed All That. That dude is EVERYwhere. When the ball was banging around in the box early on, it was Blanco that cleared it off the line. He hustles back on D, and is just as quick to capitalize on the counter (see “All The Diegos” score above, for example). Maybe it’s just me; he still looks like he mostly connects best with Valeri. When he learns what it takes to feed everyone in the front, I like our chances.

Reaction save. I have a soft spot for Jake Gleeson ever since his magical unbeaten season with the U23 Timbers; but I have always wondered if he would be able to live up to his potential. And I will readily admit that I was not delighted to lose Adam Kwarasey. But Jake did well to keep a clean sheet on the road this match, especially with that reaction save in the 94th minute. It is hardly fair to judge him on a performance behind a back line held together with mostly chewing gum and baling wire, but he did the job today.

Marco Farfan. The Centennial HS senior had his debut MLS start today, and he did not disappoint. He largely owned the sideline in front of him. The bar where I watched the match started serious conversations about what the Timbers Army should get Farfan as a graduation present. This response on Twitter was my favorite.

The game plan. All right, I Know Nothing About Soccer, but goodness sakes, what was that game plan today? Even my cats knew going into this match that we were stronger up top and in the middle, and weaker in the back, where we had Alvas Powell at fullback; two new starters (Roy Miller & Marco Farfan); and Lawrence Olum in the center, who is an acknowledged placeholder for “Awesome Centerback We Are Totally Bringing In During The Summer Transfer Window, I Promise.”

So. When we go up 1-0 and we are also miraculously up a man, do we play to our strengths in the middle and up top? No. For some reason we mysteriously sit back, leaning on the acknowledged weakest part of our lineup, for the better part of the match. I cannot remember the last time I was more nervous and full of dread when we were ahead and up a man. Somebody can maybe explain to me in the comments why, instead of pressing when were were up in points and people, and had the clear advantage in the center of the field, we seemed to be parking the bus, especially when the back line was less of a bus and more of a Yugo.

The red card. I’ll say it. Jelle Van Damme should not have been sent off. I don’t think David Guzmán was simulating, he was genuinely injured, but it had nothing to do with Van Damme. I watched that play a dozen times, and while he was late to the tackle, I really don’t think it warranted a card. Yes, he was hard done by referee Baldomero Toledo, but Van Damme should only have been sitting on a yellow for (legitimate but still cardable) dissent for the first call. I shudder to think what the game would have looked like with Guzman out and Van Damme still in the game. I think Toledo got the call wrong, though as we all know what goes around comes around.

Speaking of Toledo: I hate it when refs become the focus in any match. And, while I have complaints about him, Toledo’s early red to Van Damme actually seemed a bit out of character. I sometimes compare Toledo to that substitute teacher who is terrible at classroom management, who lets everything go to heck in a handbasket until about 1pm, then suddenly starts sending everybody to the office for ticky tack stuff like tapping their pencils on their desks.

My Toledo complaint is usually that he fails to establish control of the match early, then makes up for it with Oprah-like card awards late in the game. This match was kind of the reverse of that pattern. Still a bad call IMO, but as a Timbers partisan it is hard for me to be sympathetic (especially because it was Van Damme). Nonetheless, it was the wrong call.

The 225+ Timbers Army away traveled well. The Southland Irregulars are a large and active branch of Timbers Army away support, and they did an excellent job. In addition to setting up the prefunk and bringing the noise in the stands during the match, they worked with the LA Galaxy front office to organize a Books and Boots drive to benefit local kids. Props, Southland Irregulars. Way to represent.

Ugly wins are still wins, and somehow we still sit at the top of the table with that road win monkey off our backs. I’ll take it. Next stop: Houston at home. See you all Saturday.