ATL on the Rise 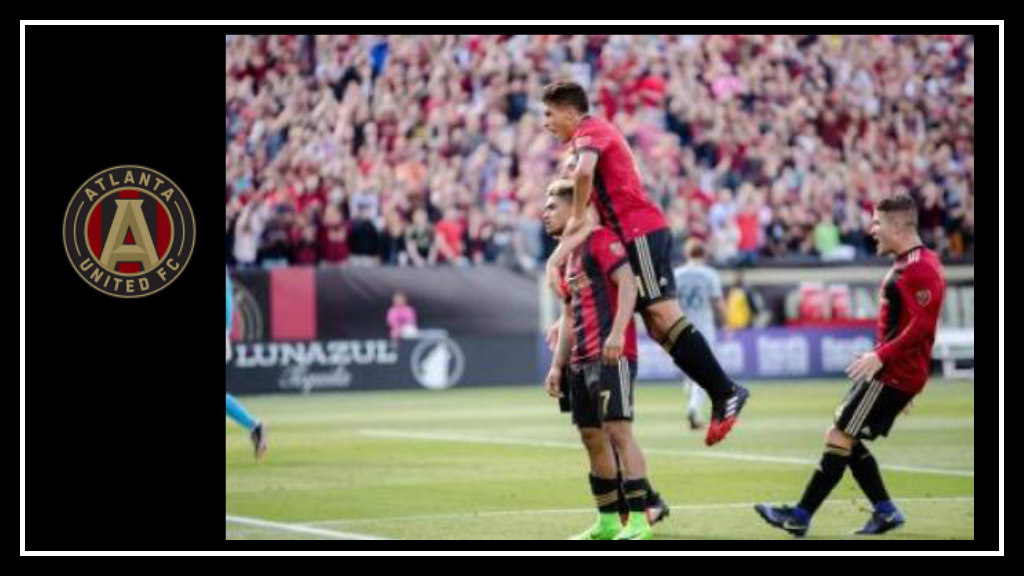 Atlanta United’s second ever home game was even better than their very first game in MLS for a few reasons. First, ATL won 4-0 in front of another sellout crowd – and over 100,000 people have attended the first two home games. Second, the stadium crew had a slightly better handle on conditions in the building and it was a much better experience, at least from my perspective. Third, the vibe in the stadium was, as I’ve seen many times in the last 24 hours, electric.

Much better location this time for the game! 😁#ATLUTD @MLSFemale pic.twitter.com/pJvJPqOJvF

Atlanta United got their first shutout and potential MLS Golden Boot winner (yep, I’m going there) Josef Martinez added another two goals to his tally. Martinez now has five goals and leads the league. His goals yesterday were spectacular.

The first came in the 60th minute when Miguel Almirón squeaked a pass through the gap that Martinez had left between Chicago Fire’s central defenders. Martinez took two touches, one drifting just far enough to his left to get around Jorge Bava, and it was in the back of the net.

His second goal in the 82nd minute saw him once again splitting the central defenders, this time with a pass from Yamil Asad. Martinez took one touch to get around Bava and then took a shot from a seemingly impossible angle.

You have to see this replay of Josef Martinez’s tight angle finish https://t.co/cUhMrctJ4u

The first goal of the game was an own goal for Chicago. MLS Rookie Julian Gressel nabbed a pass from Hector Villalba at the edge of the box and played a cross in front of the goal that was deflected in by Chicago’s Brandon Vincent.

The third goal was my personal favorite because it was my favorite player, Hector “Tito” Villalba who scored in the 67th minute to officially open his MLS account. Greg Garza sent a pass up to Martinez, but it was deflected by a Chicago defender and dropped right at Tito’s feet. After one touch to get in place, Tito launched that ball off his left foot right through Bava’s outstretched hands and into the back of the net. I’m not sure I’ve ever cheered as loud as I did at that moment.

While most of the crowd was busy celebrating the Goal-a-Palooza in the stands, others standing in line at the concession stands said that the lines were so much better this time around. At the home opener, there were not enough concession stands open and what was open was slow. I got in line for a hot dog and a bottle of water about 30 minutes before the game started and gave up about 25 minutes in. I left some money with a friend of mine in line and went back to watch the pre-game ceremonial stuff. The friend I left in line finally came by to hand me my food AFTER Atlanta’s goal (which was around the 25th minute of the game). She also nearly got in the middle of a fight in line. To say this week’s experience was an improvement would be a huge understatement.

There’s no doubt that the improved concessions in the stadium helped the mood of the crowd – maybe not as much as those four goals did, but nonetheless, the crowd was really into this game. The capos in the supporters section kept the chants simple and the sections were loud enough to get the rest of the stadium going. The A-T-L thunderclap and the “Atlanta! United!” call and response were SO LOUD. In person it was amazing to see the crowd coming together like that. When I watched videos last night of the chanting and watched the game again this morning, I may have shed a tear of joy. My friend Jason Longshore of Dirty South Soccer said it best in his Daily Dirt sub-heading today: “Atlanta United’s supporters earn an assist yesterday.”

As of 9:30pm ET on Sunday, Atlanta United are at the top of the Eastern Conference. ATL is also leading the league in goals scored with 11 and are currently in third place for the Supporters Shield. If anyone had asked me a month ago where I thought ATL would be in the standings three weeks in, I don’t think I could have predicted this.

Our next MLS game at Seattle on 3/31 will be a huge test. Three of the four ATLUTD players (Almiron [Paraguay], Martinez [Venezuela], Jones [Trinidad & Tobago], and Carmona [Chile]) that have been called up to their national teams this week are starters. How will the international break affect the team, especially against the defending MLS champions? Sure, we beat them 4-2 in preseason, but the Seattle Sounders played all of their bench and trial players. A few of their starters got subbed in late in the game, but we didn’t really get a sense of how ATL would fare against the Seattle starters.

Only time will tell, but I will be biting my nails off at a bar with my Terminus Legion family in 12 days anxiously watching the Five Stripes (not sure I’m in on this nickname yet, but I had to try it) take on Dempsey, JMO and that Seattle crowd.