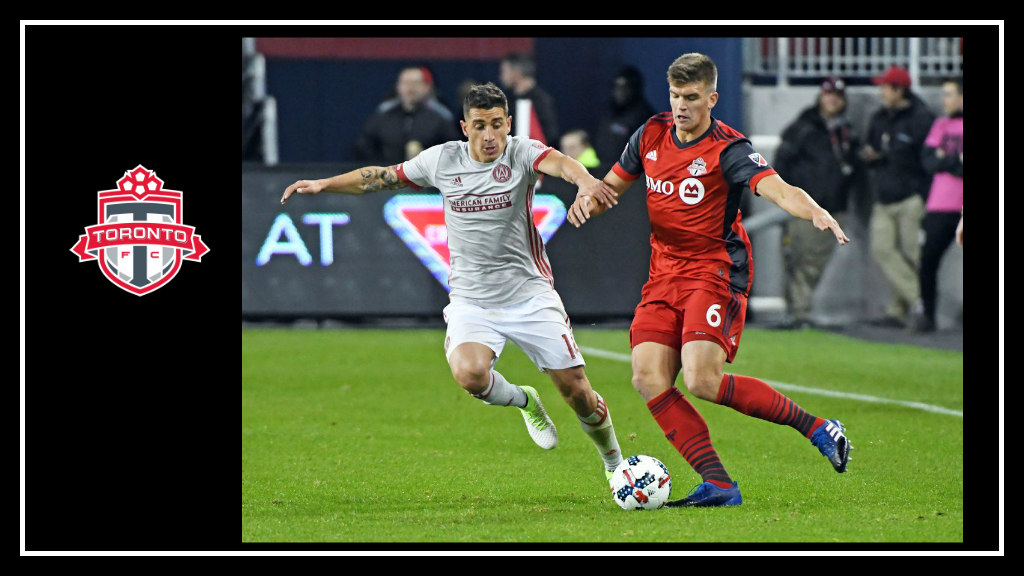 Song of the match – Help, I’m Alive by Metric

Still undefeated, she croaks, the words dying in her throat, pneumonia and an ashy taste of mediocrity diminishing the conviction and the meaning of the phrase. That and I’d be lying if I didn’t say I wasn’t at least a little bit disappointed that I missed the Toronto Maple Leafs clinching an NHL playoff spot to watch Toronto FC squander away another 2 points. Nonetheless, we all go marching on.

If I wrote this piece on Saturday night after the match it would have been filled with hatred for Atlanta United FC; the rage I felt that night was one of an instant rivalry and, on second look, may not have been as deserved as I thought. I definitely saw red that night. Atlanta made me angry.

This was due in large part to the histrionics of not once but twice goalscorer Villalba and the fact that it happened right in front of me. To see a player doubled over when there was no clear contact to have caused such pain and a mere 15 feet from where I stood was infuriating. There was also a piece of play that was not caught on camera wherein the same player ran into Armando Cooper of his own volition and then threw himself to the ground as if struck. I got angry early on and I stayed angry.

However, from the safety of my living room I have given the game a second look and I now see an inaugural side full of attacking promise and a whole lot of character for a newly minted squad. And this without having seen what I’ve heard is one of their best players in Josef Martinez. We have only ourselves to blame for a pair of defensive mistakes that lost us 2 points.

As for the red that Atlanta saw, it’s hard to convey my exact feeling towards it.

Having seen the bump on Eriq’s head, it’s hard to argue that it wasn’t at the very least pretty vicious. Asad raised his elbow level with Zavaleta’s head knowingly and threw his arm out, an unquestionable foul with intent. What I’m not sure of is what the referee saw on first look. From my view at the south end there didn’t look like much to it but I know Zavaleta is not a player who goes down easily or for long which led me to believe it was serious.

In cases like this, a retrospective ban makes sense. It’s a big call for a referee to make without having a good view of it, and it seems pretty obvious the decision was made upon a video replay on the jumbotron which was seen and reacted to by the crowd and also quite clearly viewed by the fourth official. In my opinion and even at the expense of my own team, unless all big calls are made by video review then none should be. As far as I know, video replay has not yet taken effect in MLS.

Nonetheless, Atlanta need not have worried too much considering Toronto have what must be the worst possible record playing with a man advantage in the past few years (0W-1D-5L in the 2016 season including defeat to a San Jose less 2 men) and despite a win to Vancouver Whitecaps after Brek Shea’s sending off we don’t appear to be improving on that front. So despite being graced by video replay we failed to capitalize on the chance. As usual.

It’s hard to talk about an easily avoidable draw without pointing fingers in this case. However, despite being extremely partial to Nick Hagglund (and thanks to a friend reminding me of my bias) I won’t do what Vanney did and throw a player under the bus. If a player isn’t match fit as Chris Mavinga certainly did not look, it’s up to the manager and staff to decide. It also didn’t appear that Chris really had a proper understanding of his role in the 5-3-2 formation, a miscommunication which is not solely his fault.

When Nick Hagglund came on for Chris early in the second half it was technically a straight swap but visually it completely changed the shape of the team. Nick played yards forward from where Chris sat, and Nicky’s comfortable relationship with the other 2 centre backs and Alex Bono saw Drew Moor cover for Nick when caught out of position (where he wasn’t able to for Chris for both goals) and Bono quickly off his line to make saves he didn’t make earlier on in the game.

It’s easy to blame the new guy for what did look like some pretty rookie defensive mistakes, but if we want to make this team work it will require a more in depth look at where we need to improve. So welcome to the team, Chris, and I hope you see better days.

Besides the obvious errors of Chris Mavinga, Alex Bono also didn’t look his best. He appeared very out of sorts at times and didn’t really seem to get into the game until the second half. This could be in part a lack of playing time with Mavinga, paired with the fact that Bono is getting into the rhythm of regular minutes in the absence of Clint Irwin.

I know he’s better than he was on Saturday, which says quite a bit as he wasn’t all that bad. Most notable to me was his lack of distribution in the Atlanta game, normally he outranks Irwin in my books for goal kicks but on Saturday he just couldn’t seem to find his footing. I still have complete faith in our young back up, though.

On the bright side we finally saw Giovinco on the scoresheet, and what a beautiful goal it was. Jozy’s backheel was delightful and both Giovinco and Morrow’s goals came from clever play on Vazquez’ part. Our midfield was particularly good that night, with Michael putting in a top performance as usual and Armando Cooper the best I’ve seen him. I say this all begrudgingly as we have once again seen an XI without a single Canadian player.

I know Vanney is rotating but I hope in future he’ll incorporate more Canadians into each side and not 3 one night and 0 another. This gameweek I will break apart the MotM crown and hand a piece each to Victor Vazquez and Armando Cooper. It says a lot about their performance that I am giving them these plaudits as they have both crowded my two favourite Canadian players out of the team.

It’s time for me to take another few days to shake off the pneumonia I caught on that freezing wet home opener, and hopefully for the team to also shake off the cobwebs and gain momentum in what we all hope will be another successful season. And for the big hockey games to be played before we see Toronto FC back in the 6, Go Leafs Go!