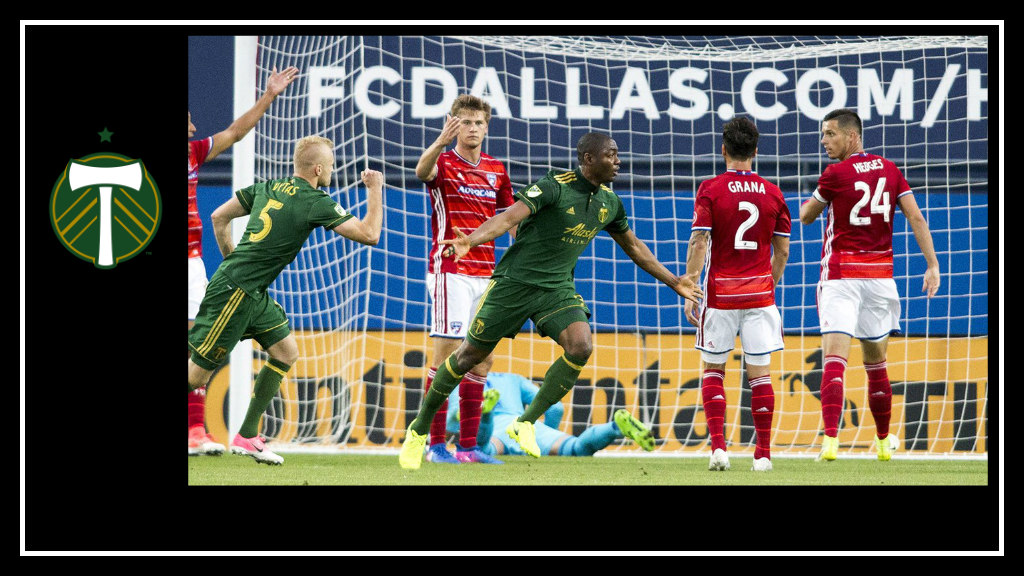 It is amazing the number of emotions you can go through in the course of watching a single match. Elation, disappointment, frustration, satisfaction, all within the course of ninety minutes (plus stoppage). That was pretty much the story of this game, which ended with what a dispassionate observer would have to call a fair result in a 2-2 draw in Frisco. And yes, if you had asked me before the game, “Hey, Sheba how would you feel about coming away with a draw?” knowing that we were missing our star player; playing against a team that hadn’t yet been defeated in the league; and against a team that hadn’t yet dropped any points at home, I certainly would have been satisfied.

I know. FC Dallas is a powerful team. The weather (lightning delay followed by wind gusts and bouts of downpours) made for a game that was less finesse and more brute force. And yes, we were without star Diego Valeri, sidelined with a hip injury. In the cold light of the next day I can certainly accept the draw. But dang, a win would have been a phenomenal exclamation point instead of a full stop.

Ah well, on with the recap.

The biggest changes to Saturday’s lineup included Sebastian Blanco moving into the number ten spot with Valeri’s absence; and Dairon Asprilla lining up to the right in Blanco’s normal spot. Fanendo Adi was back in his usual spot up top, and Jeff Attinella took his second stint in goal for the injured Jake Gleeson. While OF COURSE I’d rather have Valeri on the field, I was pretty confident that Blanco would be quite capable of taking his spot, since he has played in that position many times before for Lanus and San Lorenzo. And I appreciated having Asprilla’s pace on the wing. (I did worry a bit about Vytautas Andriuškevičius‘s speed in the back against Dallas, but his experience and crossing ability made him the right choice as our left back.)

The game got off to a late start, a fifteen-minute-or-so weather delay that apparently meant no national anthem performed by the hosts. In a class move, the traveling Timbers Army (including the TA regional supporter group Lone Star Brigade) stepped up and sang it for them after the kick.

I’m not sure why Adi was completely unmarked on the first goal, but um cool, thanks, Dallas. He played it beautifully nonetheless, heading in a free kick from David Guzmán in the 30th minute. Guzman placed a high, curving ball from well behind the 18 on the right, arcing it perfectly for an advancing Adi to head it into the back of the net for the score:

Apparently this irritated an assistant on the Dallas bench enough that he managed to get himself ejected (we have an odd history of this happening with the Dallas assistant coaching staff, by the way).

Dallas equalized for the first time in the 61st minute by former Timber Maximiliano Urruti (we still miss you, Maxi!), with a brilliant, unstoppable ball from the top of the 18 on the right to the top left corner of the goal. Ouch.

And then Blanco got to open his account, scoring a lovely team goal coming off an Alvas Powell overlap. Blanco collected Powell’s pass to the center, took a touch, and coolly fired it home for his first MLS goal:

Unfortunately, that wasn’t the last score of the game. Darlington Nagbe  was uncharacteristically a step behind his man on defense (I suspect he was already injured at that point), Powell slipped in front of the goal, and suddenly Tesho Akindele had tied it all up for Dallas. In the end 2-2 was a fair result, but oh, what might have been.

Where are Dallas supporters? It saddened me to see so many empty seats at the Dallas match. I know it is in Frisco, but Dallas has a talented team that is fun to watch (when they aren’t scoring on us, that is). Not sure what the solution is, but dang, Dallas, you have an exceptional squad. Hope the locals show up for you in the future.

Jeff Attinella, you have my attention. You had a couple of tremendous saves in a game that could easily have been a loss without your solid play. What a quality addition to the team.

Fanendo Adi was more than worthy out there. He took one for the team–eight for the team, actually, in fouls suffered, and with the goal and assist I’d say he put in a solid day’s work.

The Timbers Army continues to travel well. As we have done in every away game so far this season, the Timbers Army traveling supporters have arrived in large numbers, selling out every seat allocated to us in the away supporters’ section, with more of the same to come (we’ve already sold out our away allocation in San Jose, with a long waiting list of folks hoping to join in the fun). Keep it up, Rose City faithful, and TA regional supporters groups around the country.

Despite only taking a point on the road, the Timbers remain atop the Western Conference. Next stop, San Jose next Saturday. See you then!