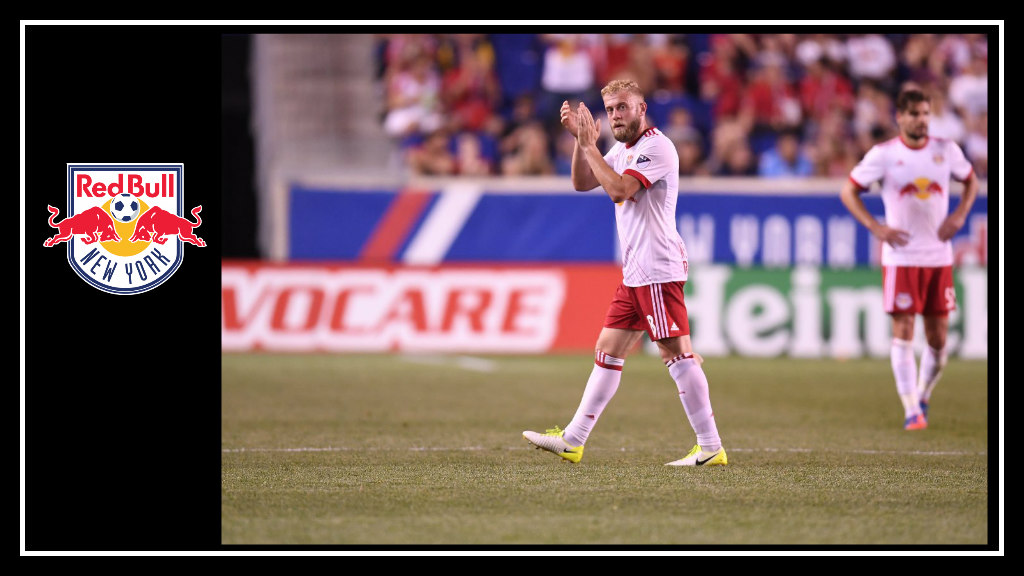 Looking to save themselves from a 3-match skid, the New York Red Bulls (5-6-2, 17 points) hosted Eastern conference leaders Toronto FC (7-1-5, 26 points), who were enjoying a 6-match winning streak. Even though TFC were missing league MVP Sebastian Giovinco to injury, the team was by no means suffering, with USMNT and former Metrostar/Red Bulls players Michael Bradley and Jozy Altidore leading the team.

Having broken their 19-match winning streak at home with the loss to LA Galaxy, RBNY once again hit the field looking as if they had something to prove. And indeed they started strong: the key to the match for the Red Bulls was to contain Altidore, which defenders Aaron Long and Damien Perrinelle did in no uncertain terms.

Frederik Gulbrandsen, still looking for his first goal with the team, had a great opportunity in the 15th minute, but it was saved by TFC goalkeeper Alexander Bono. (After taking a hit just at the end of the first half, Gulbrandsen was substituted at halftime.) TFC forward Tousaint Ricketts kept the defense busy, notably stopped by Kemar Lawrence in the 29th minute.

RBNY kept hammering away, finally drawing a foul in a dangerous area in the 37th minute. Set pieces, an important element of Red Bull game preparation, paid off when Bradley Wright-Phillips received the kick from Sacha Kljestan and put it into Toronto’s goal. The team relies on Wright-Phillips, who made his 74th career goal, to be the finisher. It’s what he’s been known for his whole career: makes no sense to stop now.

On the other hand, Kljestan, a perfectly capable midfielder, who has done some amazing things for club and country, is still wasting multiple touches in the attacking third. It’s disheartening to see a player who led the league in assists last year seem to not have options. He needs to get back to what he knows and forwards like Danny Royer and Alex Muyl need to be there for him.

RNBY goalkeeper Luis Robles didn’t have to make a save until the 2nd half. But then came the 70th minute: Benoit Cheyrou scored with a header off a free kick. It’s important to note that both goals for the match were scored off of set pieces, which really should be considered a plus for RBNY. To keep Toronto from scoring in the run of play is no small feat.

But nothing could have prepared us for the Save-of-the-Week-worthy moment in the 80th minute. A poor clearance by Perrinelle resulted in a penalty kick for Altidore. The stadium lit up when Robles read the kick and punched the ball to the far sideline. Moments of brilliance like that are hints that the spark that takes the team into the playoffs is still there.

The ball made its way up and down the field following Toronto’s failed PK. Even from home (and even on the 2nd viewing) I could feel the electricity in Red Bull Arena. It wasn’t the nervous and frantic pace seen in previous matches; this was passion and purpose.

There was also a few moments of confusion and palpable tension in the 87th minute when a shot by Ricketts made it to the back of the New York net but was called back. In the confusion and conferencing between the lead referee Robert Sibiga and the linesman, Vìctor Vásquez celebrated the goal in Luis Robles’ face… a bad choice. Turned out the goal was called back for interference from Raheem Edwards. Robles received a yellow card for his physical reaction to Vásquez. And honestly, if RBNY has to go the path of the Bad News Bears to get their passion back, keep those yellow cards coming. Just not too many, okay?

The pace remained to the final whistle, and lifted the spirits of this fan as well as many others. Memorial Day weekend, the unofficial start of summer, includes another home match at Red Bull Arena. Hopefully, the summer of soccer love awaits us.