Gerso Vain…You probably think this game is about you. 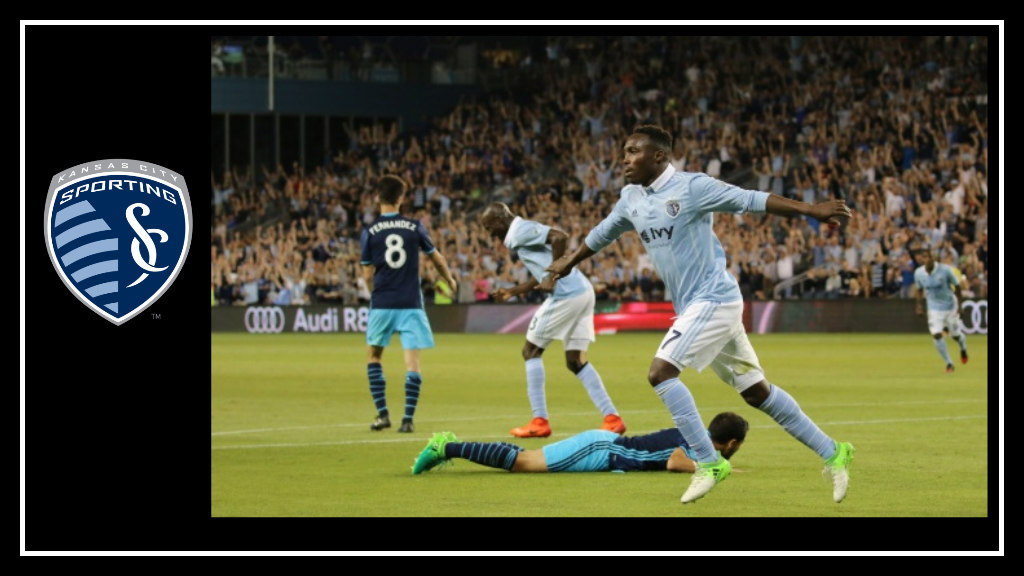 But I mean, if you are going to score a hat trick against the reigning MLS Champs then this game can be completely about you! #Gershow

Last Wednesday the Seattle Sounders came to Kansas City to take on Sporting Kansas City on our Retro Night. The festivities started off with so many ’90s songs. It was amazing! As a child of the mid to late 90s I was all for it. Though they didn’t play No Diggity by Blackstreet until the game was over, so that sucked.

I'm hoping for No Diggity on loop for #retronight @cmpark 🎶

There was no looping. There was very little diggity-ing…? That’s not a word. Oh well. There were also not a lot of things happening in the first half, but that will come later. Before the game Mo Johnston was inducted into the Sporting Legends Wall of Honor.

In the pics above you can see the awesome tifo that Tifo Team 6 painted for the occasion, when Mo came over and shook hands with the Cauldron‘s very own capo Cowboy Brandon, and our owner Robb Heineman serving up free beer in the #HeinemanBeerCorner. Now, I’m a fan of our current mascot, Blue the Dog, but our throwback mascot Dynamo the Dragon was killing it! He has the big hula hoop stomach like KC Wolf from the Chiefs, he was sassy af, he played the crap out of that drum, and he can wiggle his nose!

Now if you were to look at the reports about the game then you will find very little written about the first half of the game. That is because not much happened during the first half of the game. It was a frustrating half of soccer. Tim Melia made a few really big saves including two in the last minute of the half. That was actually pretty worrisome, but by the time he had saved the goals the half was over. I hadn’t ever seen a half with no stoppage time, but I have now. The whistle blew at 45:04.

Knowing Peter Vermes, as we all do, we can probably guess what went down. Yelling. Lots of yelling. This was actually corroborated by Gerso in the post game. Per Sam McDowell from the KC Star at the press conference Gerso said, “Basically, Peter had to scream at us…” Peter’s response, “That’s true.”

Going into the second half you could see the difference in Sporting’s game. In the 55th minute Benny Feilhaber served a corner kick straight to Ike Opara whose header almost made it under the crossbar, but Stefan Frei got his fingertips on it and pushed it over the bar. This led to another corner from the other side of the field. The attempt this time got deflected out to Gerso who took the ball back in for a shot that bounced off the leg of a Seattle defender and into the goal. #1

Two minutes later Jimmy Medranda took the ball up the side, and sent a cross into Gerso who launched it off of the post. Luckily the defender it bounced to couldn’t control it. Gerso got the ball back, and sent it past a sprawling Frei. Assist to the post…? #2

In the 69th minute Sporting strung together a beautiful sequence of passes to get their third goal. Benny brought the ball up the middle, passed it to Graham Zusi on the edge of the box, Zusi then passed it to Gerso back in the middle who finished with a huge right-footed slam into the top of the net. #3

Good thing this wasn’t a hockey game or there would be hats all over the field! The last time SKC had a hat trick was back in 2010, in the Wizards’ era, by Birahim Diop.

Then last Saturday Sporting traveled up to Vancouver to take on the Whitecaps. I would like to note that this was four days after their previous game, and their sixth game in 22 days. It has been quite a run, and in those games SKC did go 3-2-1 which is not bad.

We are still on the top of the table, we have 3 more points and have allowed 11 fewer goals than the next team, and the only team who has given up fewer goals than us is FC Dallas who also has the same goal differential.

In Vancouver there were some lineup changes due to injury and rest. Peter Vermes does not like to play Ike on turf fields or in the third game of the 3 in 8 streaks due to the higher risk of injury. We do not want Ike to get injured. He is in top form right now! Dom wasn’t starting due to a knee injury, and Benny and Jimmy got a bit of a rest…but just a bit because they both came on in the second half.

The roster choice that was the most vexing was Tyler Pasher starting in place of Jimmy. T-Pash is a mainstay on the Swope Park Rangers roster as a defender. I understand that the current defensive line is going to be hard to break into, so maybe Vermes was giving him a chance elsewhere. It was just an odd decision that didn’t pan out at all, and he was pulled for Jimmy at half.

Vancouver had two goals during the game both off of crosses. Why can’t we defend crosses? Is this going to be a thing? It’s kind of already a thing. I want it to stop being a thing. Moving on. Vancouver’s Cristian Techera had a really gorgeous ball that he played off of the chest of Christian Bolaños. It didn’t touch the ground. It went straight to his foot and into the goal. Ugh. Later in the game Tim Parker scored his first goal of the season off of a free kick from right outside the penalty area. Sporting should have scored. There were multiple chances where we were right at the goal and couldn’t put it away.

There were a few good things from this game. Tim Melia was outstanding again. He stopped a penalty kick! That does not happen every damn day! Sporting’s defense also made some pretty amazing plays (minus the goals). Seth Sinovic made a diving steal/clearance that was awesome, and after the saved penalty kick there were some fast feet by the defense to get that ball cleared.

I know there’s been a lot of talk about Dom getting onto the USMNT, but Matt Besler needs to get a serious look. He has been so good this season! I was excited to see Cameron Porter sub in for this game. I’ve been waiting to see him play in a big game for awhile, and he did alright. It’s nice to see some height on the attacking front. It was also his birthday on Tuesday the 23rd!

The US U-20 team is on their World Cup campaign, and Sporting defender Erik Palmer-Brown is captaining the squad. If you’re up super early you can catch them between the hours of 3am and 7am central standard time. When he gets back hopefully he can make some starts when Ike needs a rest.

Tim Melia and Gerso Fernandes made it onto the MLS Team of the Week, and Tim was in the lead for Save of the Week last time I checked!

Children’s Mercy has this cool robot named Rex that is used to help kids who aren’t able to go to the games due to medical conditions be a part of the gameday experience!

I started this article on Tuesday, and made it a sentence in. Between starting and finishing this I have played two games of bar trivia, watched a whole season of RuPaul’s Drag Race, eaten a pint of Halo Top, and done three loads of laundry. I guess I type better at night…it’s 2:50 in the morning right now, and 1,351 words later I am done! Thanks for sticking with me!

Sporting KC travels to Colorado this Saturday to take on the Rapids. Look for a huge Cauldron presence to turn Dick’s Sporting Goods Park into Children’s Mercy West!