Who Are Those Guys? 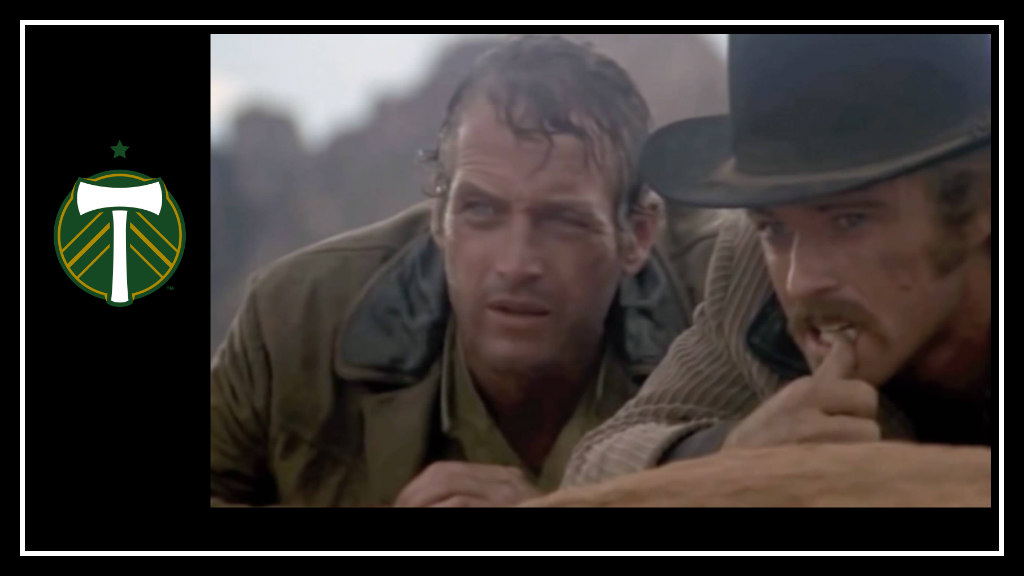 That’s what I imagine FC Dallas was asking after they were soundly defeated at Providence Park last Saturday. The Portland Timbers, already missing two players on international duty (Darlington Nagbe and David Guzmán), lost two more in the course of the match. The match finished with several players who weren’t regular starters, and two right-footed defensive midfielders at center back: and somehow the team didn’t just win, but won decisively.

The lineup was predictable. With Nagbe away with the USMNT, Dairon Asprilla once again got the start on the wing; and with Guzmán away for the Costa Rican national team journeyman Lawrence Olum filled in at defensive midfield behind Diego Chara. Alvas Powell is apparently still in the doghouse for his poor decision-making on the field, giving Zarek Valentin the start again at right back. The other eight starters were more or less the usual suspects.

At first it appeared that Fanendo Adi’s finishing might still be jinxed. With a beautiful feed from Liam Ridgewell, Adi chested the ball and fired at 5′ but was stopped by Dallas’ Jesse Gonzalez, who sent it over the bar for a corner kick. Gonzalez stopped Adi again at 15′ after Diego Valeri sent the ball through to him for another shot. Finally, though, at 32′, Sebastian Blanco fed Adi on the left. Adi stayed on his feet and sent it to the center of the goal for a score, ending his goal drought:

Adi with so much fight and Portland take a 1-0 lead! #PORvFCD pic.twitter.com/9CHU6Q1lvF

When Adi DOES score in a match, he’s just as likely to score a second, and he didn’t disappoint, putting away a beautiful score at 72′ to add to his total of braces in MLS:

As beautiful as both Asprilla’s cross and Adi’s cool, calm, collected finish were, my favorite part of the goal was the guy who didn’t touch the ball: Diego Chara. Watch that play again. Chara’s dummy in front of the goal is fabulous, drawing the defender away from Adi and forcing Gonzalez to stay to his left to prevent Chara from the easy score, which leads to Gonzalez leaping desperately to his right in a vain attempt to stop Adi when he realizes that Chara doesn’t touch the ball. Gonzalez’s dive to the corner of the box leaves him on the ground and helpless as Adi calmly takes another touch and sends the ball home.

“Disallowed Goal of the Year”

It was glorious to come away with a convincing 2-0 win; but oh, what might have been. Take a look at Valeri’s beautiful work on an almost-goal that was ultimately ruled a handball:

Wow this easily the disallowed goal of the year. Incredible from Valeri. pic.twitter.com/dsQYT1xhBU

Poetry. Sheer poetry. I agree with @totalmls’s assessment that this might very well be the disallowed goal of the year.

I also have to give a shout out to the guys in the lineup who haven’t been starters for most of the season. Dairon Asprilla put in a solid game. Besides the assist on the second goal, he was a scoring threat himself, nearly putting it in at 41′ and forcing Gonzalez to tip it over the bar for the save.

And Zarek Valentin–oh, my goodness, did he put in a night’s work. He had a brilliant clearance off the line at 22′ after Jake Gleeson initially had the save but the ball continued to roll toward the line:

And yet, amazingly, they pulled it off. With only six regular starters on the field for the last 30-plus minutes, they managed to hold down the fort, protecting the clean sheet and leaving Dallas to look at the lineup and wonder:

With Pride Week in full effect, the Timbers Army had a tremendous display of support for equality in the stands:

And in the community, we also had a great deal to be proud of. The Timbers Army and Rose City Riveters (the supporters group for the Portland Thorns) marshalled a crew of volunteers and together completed two visitation rooms for foster children and their families at the DHS offices in Beaverton:

And, in a beautiful example of paying it forward, among the many volunteers were immigrants and refugees from IRCO’s Africa House. You may remember reading here earlier about the Timbers Army sponsoring IRCO teens at futsal back in March and April. Many of those same teens wanted to return the favor, and when they heard about the opportunity to volunteer for the foster care room makeover project, they jumped at the chance:

Paying it forward: @IRCOnews teens giving back by volunteering to help in the DHS makeover rooms #RCTID #BAONPDX pic.twitter.com/dZWaWFwW5E

Finally, our match day drive was to help stock those foster care visitation rooms with supplies for kids:

Thank you for the match day donations for the DHS visiting room. You guys are the best. #RCTID #BAONPDX pic.twitter.com/fbYwHDYurv

Team. Town. Timbers Army. What a wonderful week, and a wonderful win. See you again after Tuesday’s Open Cup match!