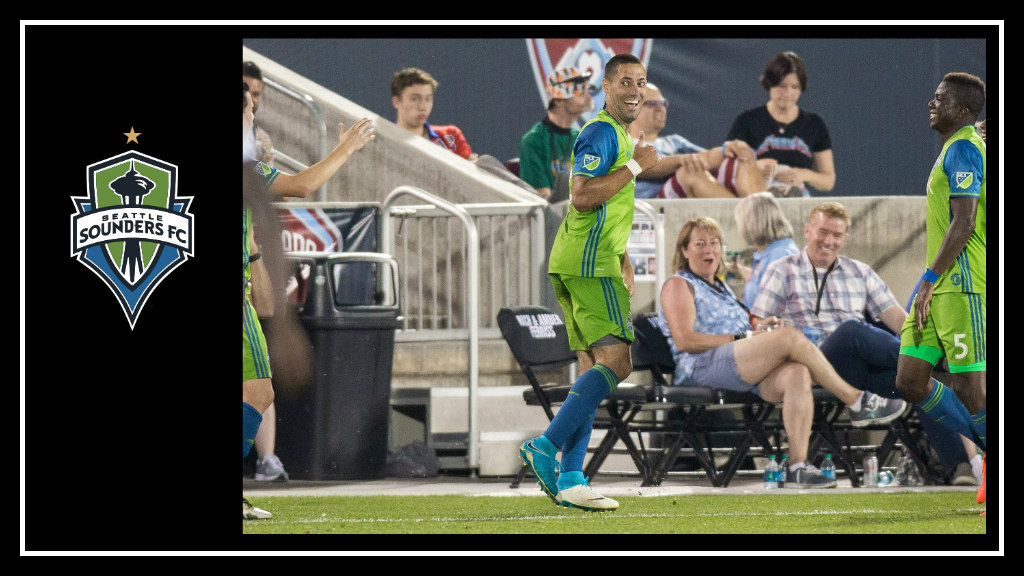 It has been an insane couple weeks for the Seattle Sounders.  Two weeks ago we had that miserable game in New York, then the Orlando game that felt like a loss with the goal in the dying minute of the game.  Then we had the Portland game when we go down a goal, and a player, only to come back at the death – so a draw that feels like a win.  We come to last Tuesday, the 4th of July game.

Colorado Rapids have not been the same since last year when the Sounders faced them in the Western Conference Final.  To start the night, Colorado was below us in the standings, both of us below the red line.  The Sounders started the game short-handed.  We only had 5 players on the bench due to international duty, injuries and suspension.  I would love to have a full roster at some point during this season, but that is a discussion for another day.  We have signed a new player but he is not eligible until July 10th.

One would think this would be a horrible game, but actually, it was a great game… for the most part.

The game starts fast, and the Sounders are moving the ball really well.  It seems like they have actually made progress.   This is a nice change of pace.    In the 6’, Clint Dempsey scores an awesome goal with the assist coming from Jovein.  From there, game goes downhill quick.

In the 13 minute, Ozzie is taken down by a heavy challenge.  He needs help off the field and is replaced by Kovar.  It gets worse from there.  In the 22nd minute, Chad Marshall goes down hard and has to come out, with an ankle injury.  So even with having a goal lead and Colorado defense being less than stellar, I think all Sounder fans were really nervous.  But the Sounders seem to fight even harder as the game goes on.  Will Bruin gets a stunner of a goal in the 30th minute.  We head into halftime up 2 – 0.

The Sounders come out fighting in the second half.  This has been the best the Sounders have looked in a long time.  Maybe things are turning around.  Kovar comes close to scoring.  Of course, with our patched together defense, can’t stop everything.  Colorado starts to push a lot and finally in the 78th minute they get a goal.  Stefan Frei then has a save that might give The Save a run for its money.  Finally, in the 85th minute, Dempsey scores an amazing goal that seals the game.

Overall, this was a very good game.  There were ups and downs but, finally, we come home with 3 points and we are back above the red line.

I am really glad we have 2 weeks off so our players can heal and be ready for a push to the playoffs.  The next game is Saturday, July 8 with a friendly against Eintracht Frankfurt.

Next MLS game is July 19th at home against DC United.