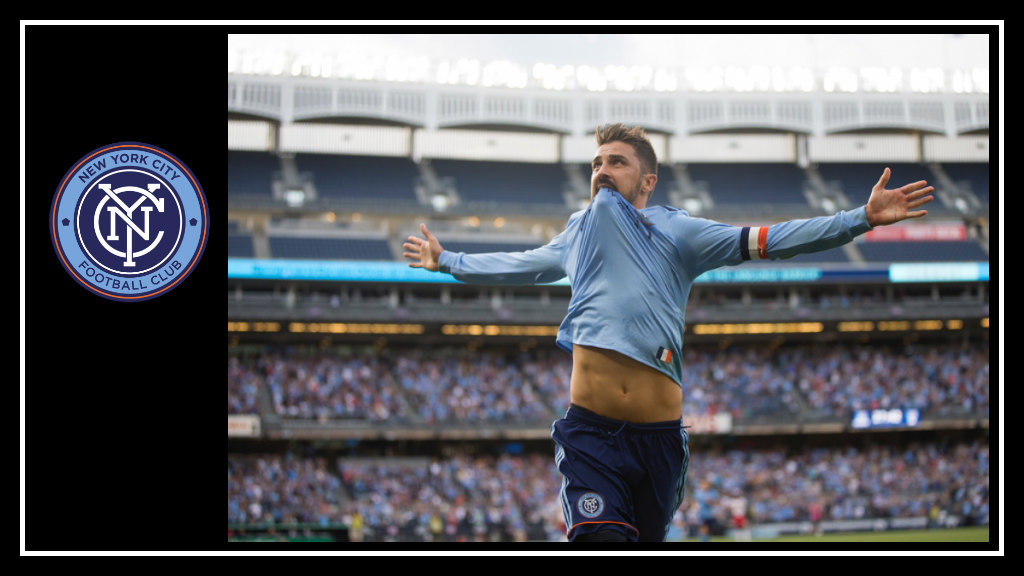 New York City FC walked into yet another meeting with their bitter cross-state-lines rivals this weekend. Though it was only the fourth time they’d confronted the New York Red Bulls this year alone, it felt like the fortieth. Before the whistle blew, everyone formed a circle on the hallowed ground of Yankee Stadium and held their hands, alternating blue and red, blue and red, blue and red. They solemnly vowed to not meet again until next season because enough is enough, and then the whistle blew.

The boys in blue enjoyed a rousing game of aggressive football. Though Bradley Wright-Phillips did his best to one-up David Villa goal for goal, he was no match. Their nemeses exited Yankee Stadium with defeat bitter on their tongues as NYCFC celebrated their comeback win.

“It’s possible you are a robot whose sole purpose in life is to play football,” a reporter told Villa after the game before his thought petered out into a nervous laugh. “But that’s crazy, right?”

With no life behind his eyes and the chants of the crowd still ringing in his ears, Villa smiled. “Yes. So crazy.”

He resisted the urge to say he was human, because that’s exactly what a robot would say.

All looked to be peaceful at last in the land of New York… Until Don Garber rode in on his highest of horses and slammed his ruby-and-sapphire-encrusted staff into the ground.

“No!” he bellowed to the heavens, shaking the cherubs (who, strangely enough, all looked like Yangel Herrera before he grew his baby beard) from their slumber. “No, I demand more rivalry weeks! I demand revenue! I demand MLS be taken seriously, but mostly I demand revenue! You shall meet again! YOU SHALL ALL MEET AGAIN.”

He disappeared in a cloud of smoke. The horse remained.

“I don’t particularly want to be doing this again,” Jack Harrison said in his piping voice, like a lovely caged songbird who will inevitably be released soon for a lot of money.

Patrick Vieira lifted his gaze to the skies, searching for any sign of their overlord only to find none. “We must,” he sighed Frenchly. “The Don commands it.”

“It won’t be so bad.” David Villa threw everyone a roguish grin. “You have me, so.”

Yes, he was indeed the hero of the night. Not one goal, not two goals, but three goals found their way from his anointed foot to the back of the net. His first hattrick! Surely there would be much jubilation tonight. Heavy is the head that wears the crown, but you’d never know it by looking at their captain, indefatigable and effervescent as ever.

“Somebody should probably take care of that horse,” Alex Ring pointed out, because he’s perfect and the only one with his priorities straight.

“Let me ride the horse.”

“No, Maxi. He’ll stomp you. You’re a quarter of his height!”

With no warning, the horse let out a mighty whinny and shook its glorious star-spangled mane. From its tresses fell– a check for extra allocation money to sign a new right-back?

No. No such luck. It was merely a note straight from The MLS Mechanism Room. With the collected calm of a man no longer burdened by his own flowing locks, Tommy McNamara picked it up from the ground and read it aloud to the group:

THE NEXT TIME YOU MEET WILL BE IN LESS THAN THREE WEEKS. THE HUDSON RIVER DERBIES WILL CONTINUE UNTIL MORALE IMPROVES. NO GODS, NO MASTERS. IN NEW YORSEY WE DIE LIKE MEN.

Andrea Pirlo awoke from his nap just in time to hear the news. “Very ominous,” he deadpanned. Nobody knew if he was being sarcastic or not. Nobody dared to ask.

For as much as they may have wanted to rally against the forces of the universe, they knew deep into their hearts that it would be futile. No man can supersede The Don. Many among their own ranks had tried, and where were they now? Gothenburg. Salt Lake City. Orlando. Retired, which everyone knows is a code word for something much more sinister.

No, to stay alive in New York City, one must play the hand they’re dealt. And if that means every other match being a Hudson River Derby to appease the whims of a fickle federation, then so be it. They had to accept their fate, prepare for their trip to the west coast and begin to brainstorm a way to defend their derby title, short-lived as it may be.

Still, nothing could take the night’s victory from them. As they headed out into the dusky evening, nineteen men and one mysterious horse, they did so with one immutable truth burning at the forefront of their minds: