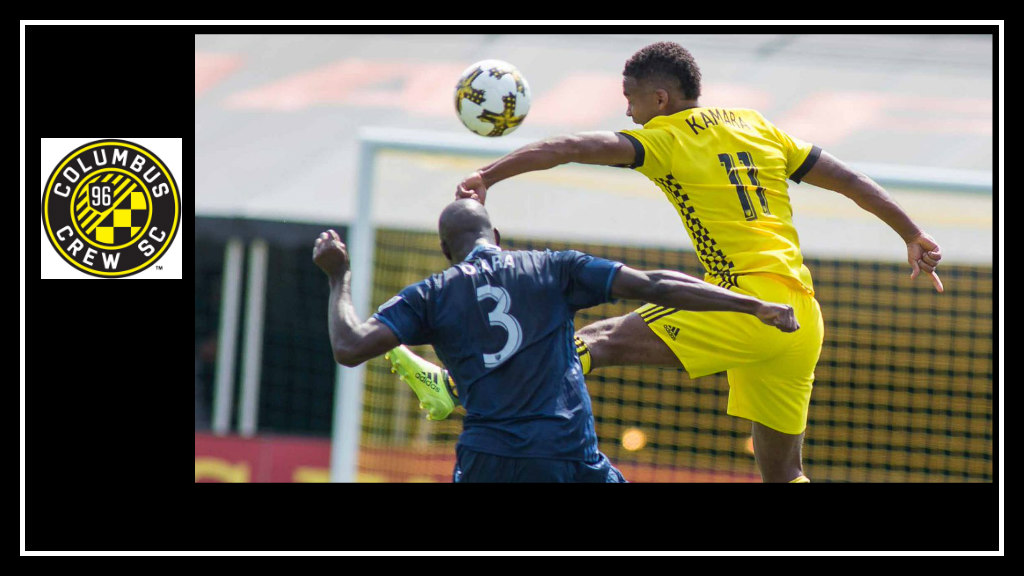 On a sunny Sunday afternoon, Columbus Crew SC played Sporting Kansas City to a pretty uninspiring draw in one of Crew SC’s final three home games of the regular season.

Kansas City struck first scoring a goal in the 19’ on an unnecessary failed bicycle clearance by Jonathan Mensah.  SKC’s Cristian Lobato took the missed clearance and nutmegged Crew SC’s keeper while he was trying to stop the shot.

There were a few opportunities for Crew SC in the first half to equalize, and they felt like the more dominant team.  In first half stoppage time, Ola Kamara headed in a beautiful goal off a Pedro Santos’ corner kick to finish the half with a 1-1 draw.

The second half didn’t provide a lot to write home about.  This could have been a game like many others earlier in the season where Crew SC gave away a draw for a loss, but they held on for a point.

Some thoughts about the game:

Pedro Santos is good.  Really good.  I don’t want Kei Kamara back, but I’m pretty sure if he was, Pedro would put every corner kick or set piece directly on to his head.   He can see the field and the plays before they happen.  I think he will be Schelotto-like—making all the players around him even better as he grows to know his teammates, and they grow to know him.

What is with both Santos and Higuain standing together to take corner kicks?  Is it to confuse the defenders with who may kick the ball?  It’s a corner kick.  Most of the time, it is going into the mass of players in front of the goal.  Wouldn’t it be better to have another man in front of the goal or someone to clean up any balls that leak through from the corner kick instead of having two players standing over the ball to kick it?

Honestly, I imagined them having this conversation at the corner flag:

Pipa:  I really should take the corner. I’ve been on the team a long time.  I’m good at it.

Santos:  I’m new.  Let me give it a try.  Plus, if they’re anything like your PK taking ability maybe I should take them…

Then I laughed at my crazy imagination, and figured this is some kind of game plan Gregg has conjured up for corner kicks that I just don’t understand.

Finally, the second half really wasn’t very exciting soccer.  This made Gregg’s substitutions in the second half even more puzzling.  Ola Kamara was subbed out in 64’ for Adam Jahn, Pedro Santos was subbed out in the 65’ for Cristian Martinez, and Jimenez was subbed out for Afful in 84’.   Bringing Afful in, I can understand as he is working his way back from an injury, and I found out later that Kamara is fighting an injury.  However, why not bring on Manneh instead of Jahn for Meram or Kamara?  Why pull Santos off the field?

It felt like Gregg was playing for the tie, and with Crew SC’s track record of giving up goals earlier in the season, I kind of understand this decision.  However, we are in a precarious spot in the playoff hunt.  We have 1 to 4 games on hand on teams that can challenge us for a playoff spot, and we need all the points we can get.

Thoughts on the previous week’s happenings:

I’ve been absent writing for the last few games.  Real life has kind of been busy, but I’m back on the beat.  I had some thoughts about the last few matches or off field happenings that I wanted to share:

Nicolai Naess was recently traded.  We evidentially made a profit from his transfer.  He played a great long pass, and he stayed calm on the ball.  I never understood why he got benched.  I feel like his absence is a real loss for the team.  However, I’m happy he will go somewhere he can contribute.

Frederico Higuain has recently stated that he believes this will be his last season in a Crew SC uniform.  Is this a negotiation tactic?  Who knows?  However, I still feel like Crew SC is a better team with Pipa on it.  I wonder if having someone like Santos on the team that thinks as fast as he does on the field will help change his mind about sticking around for another season.  Seeing Santos and Pipa when they have had even more time to gel on the field would be a sight to behold.

I also know that Ola Kamara wants to renegotiate his contract as well.  This man needs to get paid.  He is our only true forward.  We need to work on bringing someone else in as well because if his injury develops into something more serious, we will be in trouble.  Plus, we just need another forward.

During the LA Galaxy vs. Crew SC game, VAR (video assistant referee) was used three times in pretty significant ways during the game resulting in a PK, red card, and call back of a goal.  All these calls went in Crew SC’s favor.  Being there, I can say it was a crazy short stretch of time.  I’m not sure how I feel about VAR.  It did break up the flow of the game a bit, but I don’t know how often it will impact a game as much as it did this one.

Finally, I have given Mensah and Abu a lot of criticism this season.  Some justified criticisms–some probably not.  These two have been brilliant in the last few games.  They both seem confident and are working well with their teammates on the field.   Yes, Mensah did make a mistake in this week’s game, but he stayed confident afterward and continued to make strong defensive plays the rest of the game.

This is a different guy from the beginning of the season.  If the same mistake had happened to him earlier in the season, I think you would have seen shaky play the rest of the game.  Gregg Berhalter may have final found a centerback combination that works and another good center midfield option.

Hopefully, the team can stay confident and dominant against the Vancouver Whitecaps this Saturday and earn 3 much needed road points to help solidify the road to the playoffs.