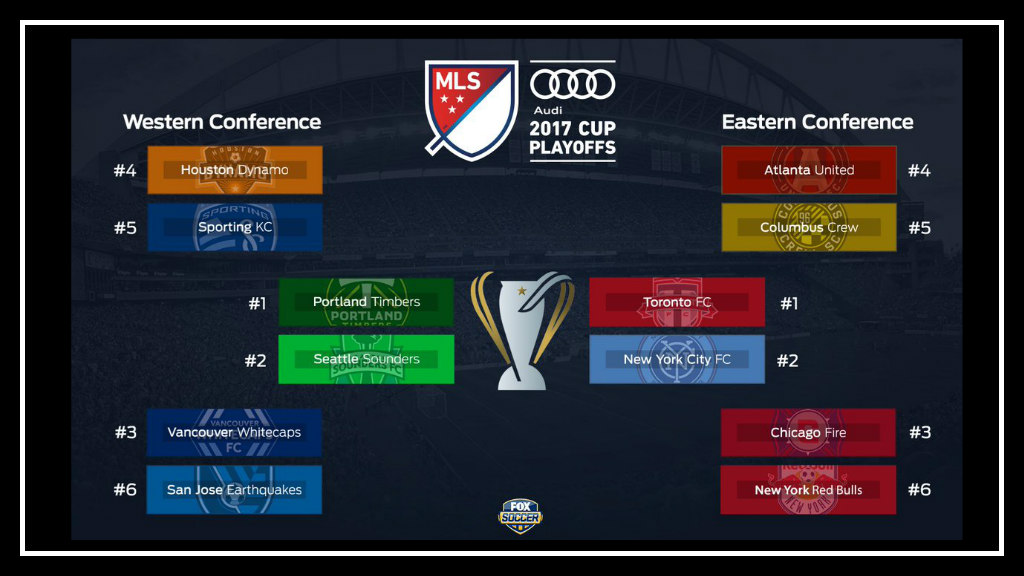 With Major League Soccer, there is no greater prize than the MLS Cup. Twelve teams, 6 from each conference, are vying for the chance to lift the ultimate prize of the league’s 22nd season. Here’s a quick rundown from our MLSFemale squad:

Toronto FC: AND NOW YOU’RE GUNNA BELIEVE US, we’ve gone and won the league! Suffice it to say the city of Toronto is over the moon with our accomplishments this season and we are looking forward to what we hope is a great playoff run. Michael Bradley succinctly put our season in summation by saying “…we went after every game from 1 to 34 like it was the only thing that mattered.” (source)

I think they can be proud that they never really wavered on that goal and it paid off. As a member of the Kings in the North, one of the official protectors of the Supporters’ Shield during it’s stay in Toronto, I look forward to spending some time up close and personal with it.

Our playoff future looks bright; one is left hoping that we take that same winning mentality into the playoffs and consider every opponent and every game with care. Finishing off the regular season at Atlanta was also a good test for us to end on. Fresh to the league, they were the one team I felt we hadn’t had a proper chance to sound out back in April. Having seen their house and how they feel about our players (your hate makes them strong, our love makes them unstoppable), I now feel confident that Toronto FC has the arsenal to make a successful playoff run. And as Giovinco has shown, this team is ready for whatever is thrown at them. So bring on our second (okay fine, third) go at it, we’re here to win it all!

*NYCFC: Not gonna lie: this team gets measurably better every year. With head coach Patrick Vieira, the Pigeons have made it to their 1st MLS post season in style, with a bye for the knockout round. Legend David Villa and newcomer Jack Harrison, as well as the rest of the squad, are going to face their first opponents well rested and ready for a run. Just how far can the boys in blue go their first time out?

By early June, fans knew that not only were the Chicago Fire going to dig themselves out from the bottom of the table, but the likelihood that they would be playoff contenders looked promising.

David Accam, Bastian Schweinsteiger, Juninho, amongst others have been battling injuries, just returned from injury, or will return from injury for the playoffs. Is the squad recovering at the appropriate time? With key players on the bench over the last couple of months, other players gained experience – this will certainly help strengthen roster options when Veljko Paunovic looks to his bench for substitution options.

Who will get the nod for the goalkeeper position? Matt Lampson, who has been with the team since February of 2016 and a total of 34 games played for the Fire? Or will Richard Sanchez start in net after only recently signing with the Fire?

We supporters are excited for the playoffs, for the opportunities that lie ahead, and for a home game, but we’re also realistic, especially after the last two unfortunate seasons.

Atlanta United: Well, here we are…The new kids in the league are in the playoffs. A 4th place finish to the regular season is better than where I thought we’d be at the beginning of the season. This gives us home field advantage for Thursday’s knockout round game – and home field advantage in Mercedes-Benz Stadium could be significant. We’ve also won both games against Columbus (#SaveTheCrew!) earlier this season – although we did lose to them in the preseason Carolina Challenge Cup in February.

This team is much stronger now. They’ve now had an entire season to get to know each other. We have a solid starting lineup – even with a few subs because of injuries. And with over 70,000 people expected at the game on Thursday to cheer them on, I think Atlanta United has a really good chance at hoisting that cup in December.

Columbus Crew:  In the middle of the season, the Crew was struggling and looked unlikely to make the playoffs, but Berhalter seems to have the magic touch with his team at the end of the season.  The tie against NYCFC took the Crew’s unbeaten streak to 10.  It kept the team in the 5th spot while a win could’ve put them in 2nd place.

The team is dealing with a lot of distractions with a fan base who passionately loves them and is distraught that an owner would take them away.  (#savethecrew)  However, if the team can keep their form and absorb the passion the fans are showing them, they actually have a chance against Atlanta.  Although, it will be a tough away game.  The fans really need them to win, so we have a home playoff game to show how much we love the players.

New York Red Bulls: Whew! Just made it in under the wire. But RBNY is in the playoffs for the 8th season in a row. Always the bridesmaid, RBNY is the only MLS 1.0 team (originally the NY/NJ Metrostars) never to lift the MLS Cup. Coach Jesse Marsch has said that the team has been the favorite during the playoffs to no avail and that it’s time to be underdog.

I’m expecting a solid performance from Tyler Adams and the rest of the back line as well as more attacking from Daniel Royer. Defender Aurelien Collin has been working his way back to full health, and Jesse hopes to be able to bring him back into the 18. Dax McCarty and the Chicago Fire are the first obstacle in the knockout round, and another edition of the Hudson River Derby is practically guaranteed after that. It won’t be easy, but nothing worth having ever is. Fight Together.

Portland Timbers: It is not an overstatement to say that for the Timbers this Sunday’s game was the most important game of the year up to this point. The Cascadia Cup was on the line, as was the chance to win the conference and a first round bye.

With a Portland win, they have won the West and a first round bye. They also take back the Cascadia Cup, the coveted supporter-owned trophy awarded to whichever northwest team has the best finish among the three Cascadia-area squads. If Portland had tied or lost, Seattle would have taken the Cup, and Portland would almost certainly have dropped to third or fourth place, hosting a midweek knockout round game.

As I expected, Attinella remained in goal, with Vytas and Powell on the wings, and Mattocks up top as we wait for Fanendo Adi to be match fit. And with PTFC’s Mattocks being a former Whitecaps player there was plenty of opportunity for a knife-twisting match finish as he gave us the go-ahead goal to seal the deal. Now we wait to see who makes it out of the knockout round.

Seattle Sounders: It is finally time to defend our cup.  This year has been such an up and down year.  There are days where we look like the team from last year’s run.  And then there are games where we look like a team that hasn’t even played together before.

The game against FC Dallas gives me hope that maybe we are turning a corner.  With a win on Sunday gives us a much needed bye.  This will give the team time to heal up.  I can’t wait for this run at the MLS cup.  I really hope the top team in the East loses so we can host the cup this year!!

Vancouver Whitecaps: The Whitecaps were able to pull themselves above the red line in a very decisive way, landing themselves in 3rd place in the Western conference after flirting with the top spot for a hot minute. They will meet the San Jose Earthquakes in the knockout round at home in Vancouver. This is a decided advantage for the Whitecaps, as BC Place has been a fortress for the team this season.

*Houston Dynamo: The Dynamo played VERY well at home this year, giving up only one game at home at BBVA during the regular season. And they have to be looking forward to the opportunity to take on Sporting KC again, having just beaten them at home less than two weeks ago and drawing them in Kansas City shortly thereafter. If they manage to pull it off, their next opponent will be one of the top two finishers in the West, Portland or Seattle.

Sporting KC: I am not pleased with how this season ended, and I am not pleased that Sporting fell from 1st to 5th in the West over the last third of the season. If we’re going to make it anywhere in the playoffs we have to do one thing…score goals. It seems like that should be pretty easy, but obviously it’s not since SKC scored just 3 goals in their last 5 games.

If the Sporting team from the beginning of the season comes back then we could be in good shape, but the run will be hard since we have no home field advantage. Hopefully, with this being the third game against Houston in a two week span we’ll have them figured out. Sporting, don’t make this city regret all the energy you put into the US Open Cup. We need some of that magic for the playoffs.

*San Jose Earthquakes: The Quakes had a wild finish to the regular season, with the winning goal coming three minutes into stoppage time against expansion side Minnesota United. Now they travel to Canada on only three days rest for a single game elimination round. They may still manage the upset against a Whitecaps squad that is struggling to put games away at precisely the wrong time in the season.

If San Jose can pull it off, they will face Portland in a conference semifinal, a team they’ve beaten at home twice during the regular season.

(Teams marked with a * do not have an official reporter from MLSFemale. If you support any of these teams, find your inner reporter and contact us!)