Timbers are Kings of Cascadia 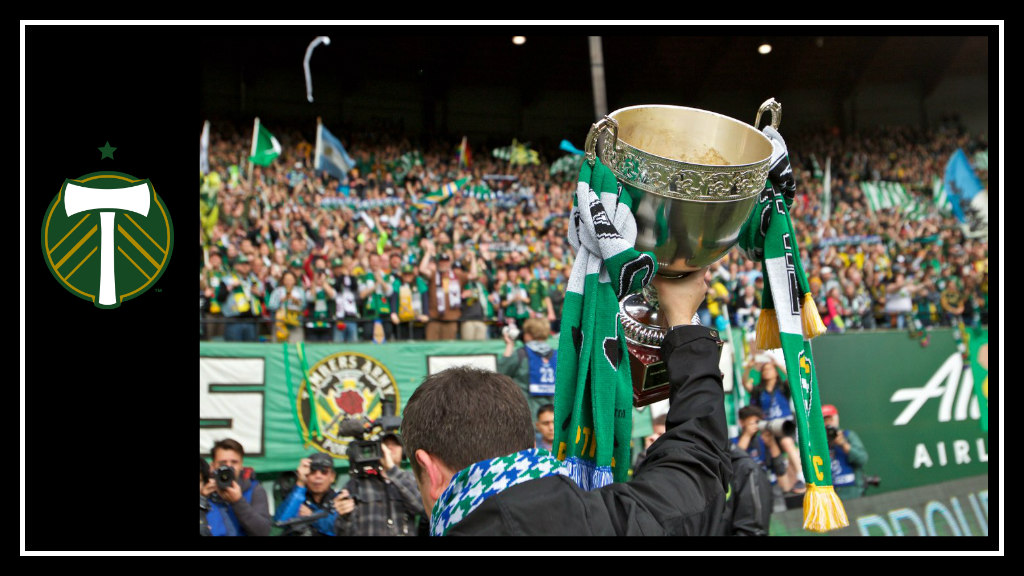 If you’ve ever been to a match when the Cascadia Cup is on the line, you never forget it.

Long-time Timbers Army members tell stories of the first Cascadia Cup matches early in the A-League/USL era, when supporters of the Vancouver Whitecaps, Seattle Sounders, and Portland Timbers all agreed to pitch in to buy a trophy to honor whichever Cascadia team had the best regular season record among the three. They can tell you why you should never pick the Cup up by the handles, and about how league and schedule changes have forced supporters from all three clubs to come to agreement on how to handle unbalanced schedules and other hiccups in the past.

In the MLS era, I remember when something like 1500 of us went to Seattle in October 2012 with the chance to win the Cup–and instead got spanked 3-0. I remember when hundreds of us then trekked to Vancouver two weeks later to christen the newly renovated BC Place, and Jack Jewsbury blasted a ball from distance to give us a 1-0 victory and our first Cascadia Cup in the MLS era.

As in years past, if there is ever a Cascadia Cup match where the trophy is on the line, representatives from supporters of the potential winner of the Cup must be in attendance, even if their team isn’t playing. And representatives of those in possession of the Cup must also be in attendance when the Cup is on the line, even if their team isn’t playing. When we had to surrender the Cup in 2011, representatives of the Timbers Army had to drive to Canada to hand it over to either Seattle or Vancouver, depending on the outcome of their match. In 2012, turnabout was fair play, and Seattle had to drive to Canada to hand the trophy over to us.

This year, Portland has had several chances to seal the deal. Vancouver brought the trophy down to a Portland-Seattle game in case we won the game and the Cup (we didn’t); Portland supporters had to go to a Vancouver-Seattle game in case they drew and we won the Cup (we didn’t); and Seattle had to come to Portland for our final match against Vancouver in case we drew or lost, which would have meant Seattle winning the Cup (they didn’t). In the end, all three supporter groups traveled to matches played by two teams they didn’t support, all for naught and all because of the Cascadia Cup. It was standard Cascadia Cup drama.

And it was glorious.

Of course, since it was a Cascadia Cup match, I was already a wreck well before the game. And not only was the Cup on the line: a win would put us into first place in the West and give us a first round bye. With the Sounders playing hapless Colorado, a tie or a loss would almost certainly put us into third or fourth place, with the insult-to-injury of losing the Cup to hated rivals in Seattle, followed by a midweek play-in game on little rest.

Superstitious to the last, I baked the same fanladen treats I’ve been baking since our home game winning streak began in August. I wore the same USL Timbers earrings I wear to every home game. And I was still sure how this script would go. I figured that, as a former Whitecaps player, Darren Mattocks would score the early goal to punish Vancouver and get our hopes up; and that Fredy Montero, recently acquired by the Whitecaps, a long-time former Sounders player and hated rival, would crush our spirits with a late equalizer. I hoped for the best and prepared myself for the worst.

As I expected, we went with the same lineup we’d used against DC United. Both teams looked to be pretty stingy early on, so it wasn’t surprising that the first score came off a set piece. Kendall Waston punished Larrys Mabiala in the 29′ with a beautiful header off a free kick. I groaned, expecting Vancouver to be sensible and pack in the defense.

But then a funny thing happened. The Timbers started flying into the box, and the Whitecaps were unable to respond. Just three minutes after the Waston header, David Guzman took a deep free kick from just past the center circle and Aly Ghazal headed it out the back unnecessarily. This set up a corner kick for Guzman, who sent it to the top left corner of the box to Darlington Nagbe. Whitecaps keeper Stefan Marinovic was barely able to bat away Nagbe’s curling shot; unfortunately for Marinovic, he batted it to the waiting feet of Liam Ridgewell, who stretched out just enough to tap it across the goal and into the net to tie the game:

The rest of the half, the Timbers were on the front foot, as they say, continuing to press. I kept waiting for the boys to falter and suffer from a counterattack but it never really materialized. And then three minutes into the half a beautiful team goal involving Nagbe, Sebastian Blanco, Vytautas Andriuškevičius, and Mattocks put us ahead 2-1 to stay:

Start your Tuesday off with The Complete Look at this beauty of a goal, the game-winner by Darren Mattocks. #RCTID pic.twitter.com/qoUlmBBtbi

Vancouver battled hard in the last few minutes but to no avail, and when the final whistle sounded the unbelievable had become reality: we had won the West and the Cup.

Sebastian Blanco had an excellent game. I know some people grumbled that he took shots that were off the mark, but the truth is that his work rate is incredible, he is starting to team well with others, and those shots he took wouldn’t have been possible if he hadn’t worked so hard to get the opportunities in the first place.

Darren Mattocks is playing well(!). At the start of the season, I would not have guessed that I’d consider preferring to start Mattocks up top over Fanendo Adi going into the playoffs; but here we are.

Surprising absolutely nobody, Diego Valeri was the hands down winner of the Supporters Player of the Year award. We are ready to build the statue any time, folks.

Fanladen is packed with people trying to get pics of the Cascadia Cup. #RCTID pic.twitter.com/BNfpAGZcKG

It’s back home where it belongs.

Looks like we are probably playing our next game either October 29th or October 31st (I’m betting Halloween). We’ll know who our opponent is later this week. See you all in the playoffs!