How I grew to embrace the ISC Wooden Spoon, but I am so happy to see it go. Congrats, LA! 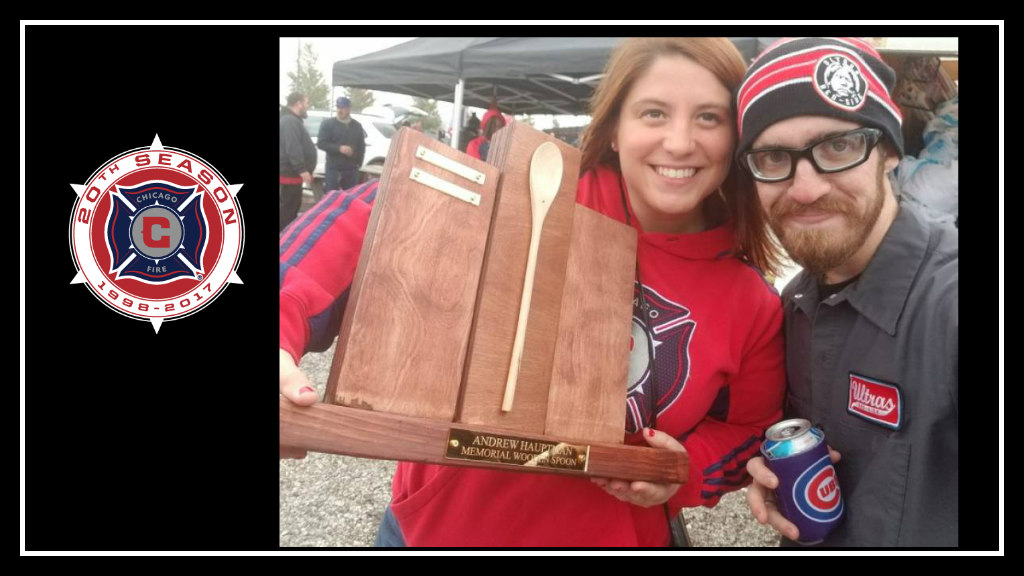 Have you heard of the ISC (Independent Supporters’ Council) Wooden Spoon? Unfortunately, I’m all too familiar.

After attending Chicago Fire games regularly since 2004, in 2015, I decided to take the plunge and run for the Director of Communications position for Section 8 Chicago (S8C); I ended up holding the position for two years. As luck may have it, those two years (2015-16) the Chicago Fire was the worst team in the league. Yep, both years. Bottom. Of. The. Table.

As a board member for S8C, my daily routine consisted of producing social media content that would encourage support of the team. A goal of ours was to stress the importance of getting into the stadium early to cheer on the Fire (#FirstInLastOut), and of course, we also wanted to expand our supporters’ community.

It was a challenge to get regular, long-time supporters to games, let alone new fans.  “Hey, come to a Fire game, statistically, it’s unlikely that they’ll win.” It was a melancholy time for me. Fans argued. Stands were empty. Supporters’ culture faded. Two years in a row, the Chicago Fire finished in last-place earning them the honors of the ISC Wooden Spoon.

As a supporter, it was frustrating and often heartbreaking to see the decline of the team, but the 2015-16 seasons took suffering to a different level. Somehow, even with love for the Men in Red in my heart, the team grew more agonizing to watch.

So what exactly is the Wooden Spoon that I speak of, and why did I (and other Fire fans) learn to embrace it?

When your team finishes last place in the league two years in a row, you can either sulk endlessly or embrace it. And don’t get me wrong, we did sulk. We cried. We complained. We were bitter. But in the end, we continued to love the Fire, and we even learned to love our wooden spoon too.

This @ISCspoon ain’t ours anymore. So long. Farewell. Peace out. #cf97 #MLS pic.twitter.com/rlcaZ4liE2

The History of the ISC Wooden Spoon

Conception of the spoon

The spoon was kind of a long term process if you wanna talk about it’s conception. It was first decided at the ISC in Chicago, so January 2016, that there needed to be a league wide trophy to shame the worst team. Since the ISC is the overarching organization that administrates the Supporters Shield it made sense that they will also run the Wooden Spoon. It was decided Section 8 Chicago would make it as we won the wooden spoon that year. Sadly, it would be a long process as we would also win the spoon the following year as well. The reason it was decided this needed to happen is we felt that the league didn’t do enough to punish or shame the failures in the league. Pro/rel does that automatically for most leagues and in most leagues the losing team gets significantly less money. In MLS you are rewarded for failure, at least monetarily by the league. The spoon was our small way of putting pressure on a failing organization.

For some reason it was put on me to make the trophy, with the deadline of having it ready by the next ISC in Atlanta. I definitely stalled on it a bit and we tried many many different designs before we settled on the current iteration. I started work on the final design in November 2016, but I don’t think it was actually finished until the week before the 2017 ISC in late January. It is made of 90% plywood, wood glue, malort and hatred. Seriously, the woodworking is absolutely garbage, but that is kinda the point. I did my worst, in a very literal sense.

Who should win the Wooden Spoon?

Personally, I’m hoping for LA, as this year is already so backwards. That would just be the most backwards thing possible. Also, I want a fanbase that will properly shame their front office with it – that is the whole point. I think D.C. and Colorado will laugh it off and take it in stride. LA would HATE having this thing.

Discussion at tonight’s @Section8Chicago meeting: Who will win the @ISCspoon this year? #MLS #CF97

With that said, Congratulations, LA Galaxy and fans. You are now the privileged winners of the ISC Wooden Spoon. Even last-place deserves a trophy.