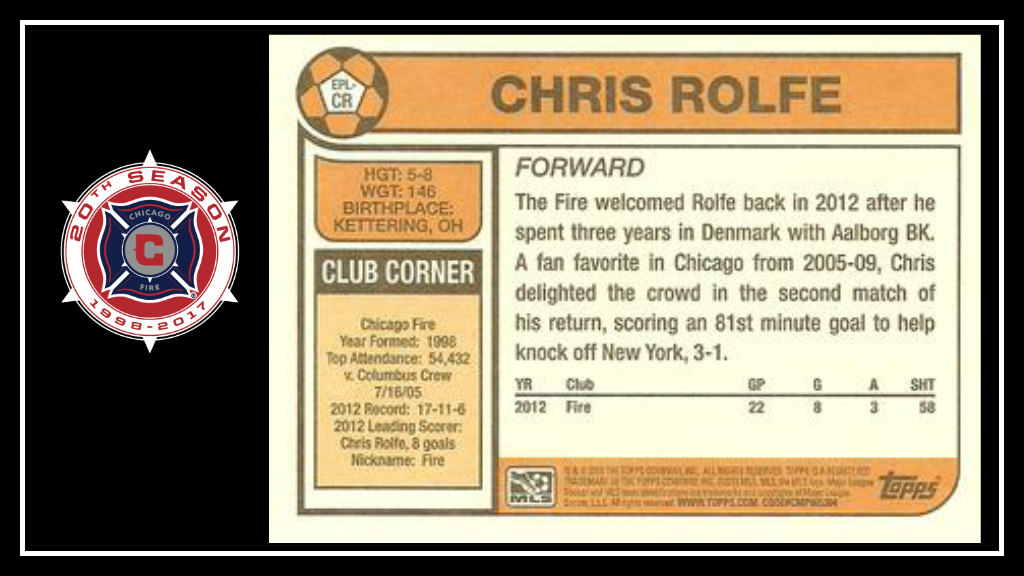 Today one of my all-time favorite Chicago Fire players, Chris Rolfe, has announced his retirement from professional soccer. By showcasing his passion for the game with his quick-footed talent, he allowed me to love the magic of the beautiful game more than I already did.

Help us congratulate one of #cf97‘s all-time greats on a fantastic career. Best of luck in retirement, Chris! https://t.co/NBCNxd03ML

In Rolfe’s tenure with MLS, I was able to establish two amusing interactions with him:

The first time I met Rolfe was at a team Meet & Greet event. I was young (25) and awkward. Rolfe was a rookie and meeting fans was unfamiliar for him. I approached Rolfe not knowing what to say, “You’re my new favorite player.” He responded by staring at me blankly.

At the Chicago Fire’s 20th Anniversary party this year, I had the opportunity to chat briefly with Chris. I reminded him that he, along with DaMarcus Beasley, are my two favorite Fire players of all-time. I explained that I had finally found my third favorite Fire player, and I asked him to guess who it could be. In less than thirty seconds, he responded, “Michael de Leeuw?” And so, my admiration for Rolfe grew.

Seems like yesterday that it was 2005 and we were two first year pro’s sitting in a hot tub in Glasgow realizing that we had just played for our USMNT. We chatted about how 12 months earlier we never expected to play professionally let alone for @ussoccer. Was an honor, pal. https://t.co/FpiaXHCI9H

I’ve had some cool talks with Chris over the years, but one of my favorite memories will always be going up to Ohare to surprise him w @Section8Chicago supporters when he re-signed in 2012. What a great day. #cf97

Without question, Rolfe has created countless memories with those who knew or supported him during his playing days. I wish him all the best in his future endeavors. He will always have a home in Chicago.

Thank you @ChrisRolfe17. Section 8 wishes you the best in all your future endeavors. You are welcome back in the #cf97 community any time. pic.twitter.com/TAbBuuAT2U