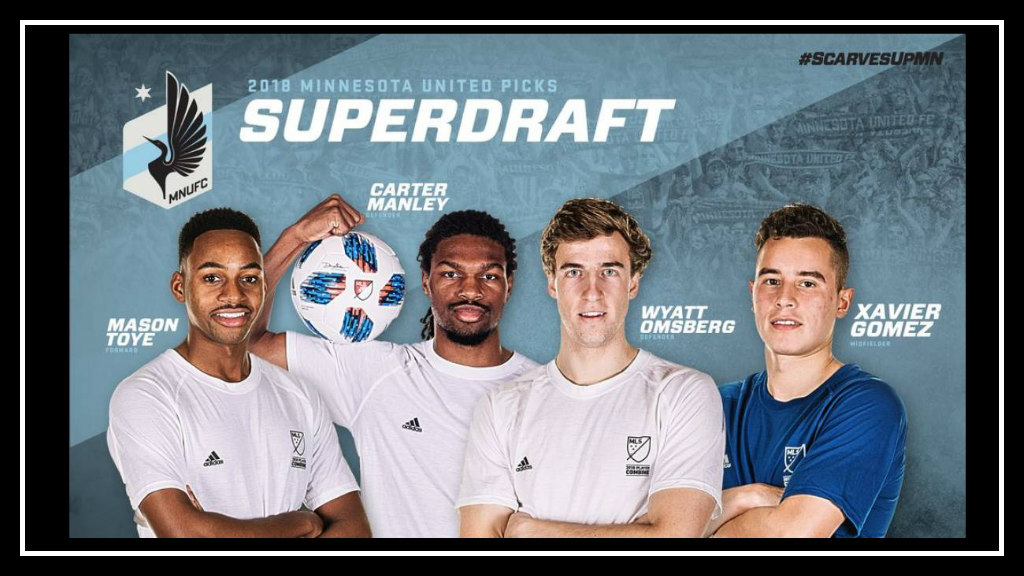 This team is full of surprises. I was expecting to get maybe a paragraph or two out of the draft day, but Minnesota United FC was making up for lost time. Here is my update:

The north is slightly less restless. In fact, following the early-and-often negotiation tactics of coach Adrian Heath, Sporting Director Manny Lagos and Director of Player Personnel Amos Magee, was like taking a crash course in Advanced Player Acquisition. My head is still spinning, but here’s where we stand.

United first traded their 5th pick to Chicago Fire for $75,000 GAM, $100,000 TAM, the 15th pick and a player to be named later in the day. That lucky Fire player (I hope he feels that way) was goalkeeper Matt Lampson. With 24 starts in 2017, Lampson adds depth and experience to the position behind current starter Bobby Shuttleworth.

The club then acquired the 7th pick from Montreal Impact, in exchange for $150,000 in TAM, and selected forward Mason Toye. The Generation Adidas player out of Indiana University was named Big Ten Freshman of the Year in 2017. United already has two solid strikers in Christian Ramirez and Abu Danladi (the club’s first ever draft pick), but Toye can play backup to Danladi when Ramirez is on international duty and affords the flexibility to play a two-striker formation.

With the 15th pick, United selected defender Wyatt Omsberg out of Dartmouth. His 6’4″ frame will be helpful in set pieces, an aspect of the game in which United has long been lacking. Joe Greenspan was expected to play that role in 2017, but missed much of the season due to injury and was released.

Three players in one round were not enough for MNUFC. Heath and company took the final pick of the first round from Toronto FC in exchange for a second round pick and $50,000 in TAM. With that pick, they selected another defender, Carter Manley from Duke, who trained with the Loons this offseason. Manley adds more depth and options to what we expect to be a new-look back line.

But wait, there’s more! In the second round, with the 41st overall pick, United selected Xavier Gomez of the University of Nebraska – Omaha. Gomez adds depth to a midfield that is currently a little wing-heavy.

In all the post-draft interviews with United staff, one word, spoken repeatedly, stands out: Potential. So, with five new Loons reporting to training on Monday, let’s just say the north is rising.