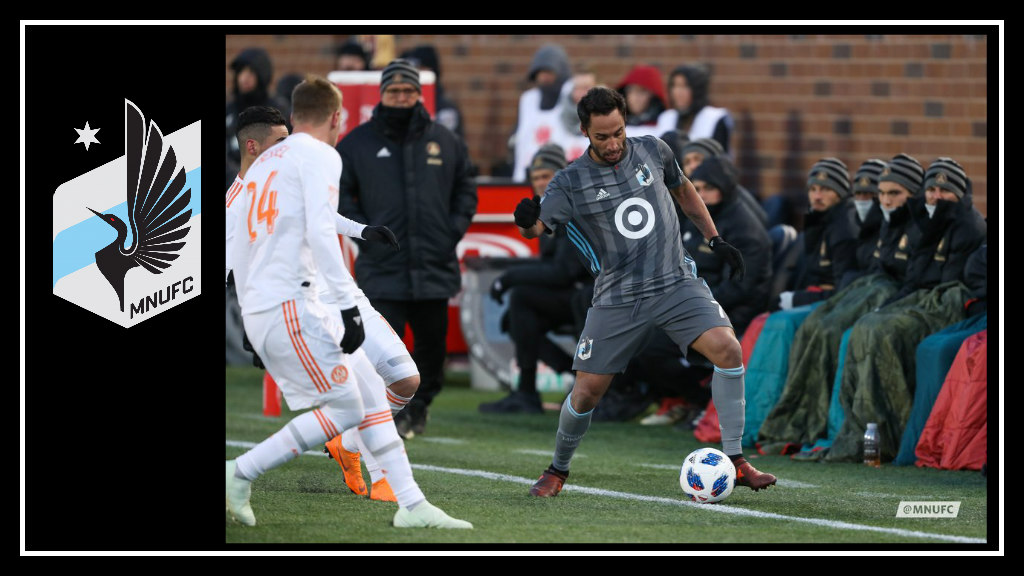 Two Uniteds meet again in the frigid cold. One dominates in possession and manpower. The other scores. Or did they?

Last season, Minnesota United lost their inaugural MLS home match to fellow expansion team Atlanta United, 6 – 1, on a league-record breaking, cold and snowy day, known simply as the “Snow Opener” (or “Snowpener” if you’re saving characters on Twitter). In the second home match of their second MLS season, Minnesota had a much different showing. But they still lost. So what went wrong?

The Loons were set up for an attack-heavy game, with a recovered Abu Danladi starting at forward in the preferred 4-2-3-1. Speed was favored over Christian Ramirez’s size up front. But Atlanta came out with a 3-4-1-2 setup, fronted by Josef Martinez and Hector Villalba, to exploit Minnesota’s defensive weaknesses. The focus on speed led to a frantic start, with Atlanta drawing a yellow card before the first minute mark.

Shortly thereafter, Atlanta scored on a corner, when a ball blocked by Matt Lampson was then redirected by Minnesota defenseman Francisco Calvo. His own-goal would seal the game.

Minnesota fans rightfully expected the game to turn around after Atlanta’s Gonzalez Pirez was sent off in the 37th minute. Surely the Loons couldn’t lose a match in which they would go on to dominate with 70.7 percent possession and while up a man.

Unfortunately, Danladi’s youth and speed did not figure into this match. He had some great attempts in the box, attempting to flick the ball around Atlanta’s defense, but seemed lost in the sea of peach-and-white. Ramirez, subbing in late, looked more comfortable in the box, but again saw no results. Rookie Mason Toye also looked dangerous in his few touches but has yet to find the net.

However, while both sides were focused on playing up high, chipping away at every gap in the other’s backline, Atlanta did the best job of closing in within the box. Despite being down a man, Atlanta fought off a number of crosses and keeper Brad Guzan put in a solid night’s work of blocking dangerous chances.

Saturday’s 1-0 loss was definitely an improvement over the “Snowpener” result. Coach Adrian Heath told the press after the match, “Overall, I’m absolutely delighted with my players […] and I feel for them tonight because they did not deserve to come out of the game with nothing.”

On why Atlanta succeeded where Minnesota didn’t: “We must have put seven or eight crosses in the box and I didn’t see anybody getting across the front of anybody […] Yeah, they (Atlanta) were a little bit dangerous on the counterattack. That’s what you get when you spend millions and millions of dollars on players.”

Next week, the Loons have a much-needed bye week. After time for recovery and training, we may discover exactly what potential this year’s squad might have.