Ibrahimovic’s debut: the lightning and the thunder of the LA Galaxy 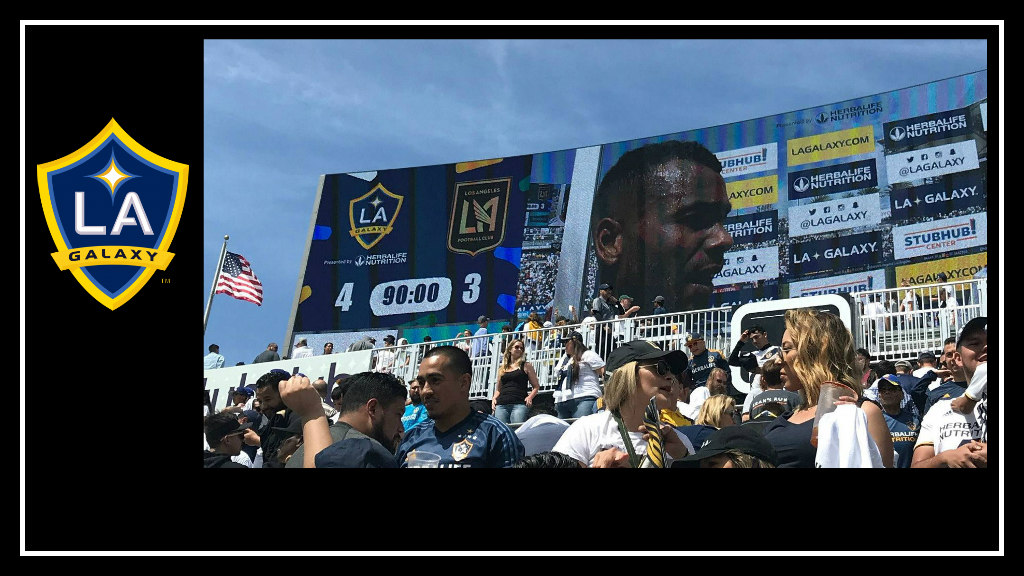 27,000 in attendance. A sold-out crowd. Los Angeles Galaxy vs Los Angeles Football Club: The first match ever of its kind, the LA Derby and El Tràfico, are some of the better names this was called. This game is going down in history and soccer people will be talking about it for the rest of our lives. Friends of mine who don’t even care about soccer or live in other countries heard all about it. We’ll get to Zlatan Ibrahimovic, but just like we fans in the stands had to wait, so do you. Lol. It’s important to recognize how we struggled to appreciate our success.

LAFC showed how fast they were in the first half. They also put a lot of pressure that the Galaxy doesn’t seem used to.  The pressure often forced the Galaxy to play on the right to Rolf Feltscher, who would try to get crosses or pass, but once the Galaxy would get a shot, LAFC would get the ball back and take it straight down the field as many described as one-way traffic.

All of this resulted in LAFC’s #10 Carlos Vela scoring twice in the 5th and 26th minutes.

The LA Galaxy seemed to second guess themselves. Ema Boateng would get good momentum and get the ball to Lletget, but a lot of our players were standing and waiting for the ball, and you don’t want to see the ball and Kamara not moving forward, especially down two goals.  The Galaxy also seemed to bunch up too much or too spread out on long passes.

Our defense was definitely lacking, we didn’t have designated players such as Romain Alessandrini and Jonathan Dos Santos due to injuries, and it looked like our guys were missing the chemistry to connect key players with the ball as a result.

Don’t get me wrong, The LA Galaxy are good. They had chances near the end of the first half, in the 45th minute when Chris Pontius knocked on LAFC’s door with the best shot so far, but just couldn’t make it himself nor could he service it to Kamara. Each of our players is capable and has credentials all their own. Ola Kamara is one of the best MLS goal scorers in the last two years. I watched us fight for the ball, Lletget taking on three defenders, getting the ball over to Feltscher. The trio of Boateng, Lletget, and Pontius working together to make plays and create chances. Servando Carrasco earned us a corner in the 48th minute.

LAFC was just the better team. Then, to kick us while we were down, fate would have it that Steres scored an own goal off a deflection.

So, what could coach Sigi Schmid do to improve and give us a chance to come back in the second half? The fans were calling for Zlatan Ibrahimovic.

But, when the second half started, there were no changes on either side. The game had changed, though, LAFC tried to slow down the pace, but as we saw in the first half, that isn’t how we play. We saw Zlatan warming up by the 52nd minute.

By the 53rd minute, Jorgen Skjelvik, Boateng, and Lletget had strong efforts and chances in the attacking third; Pontius maintaining our possession, which Perry Kitchen, Ashley Cole, and Carrasco got the ball for more chances there, which finally paid off.

LAFC’s defense opened up and in the 61st minute, Lletget scored! Baggio Husidic subbed Servando Carrasco, who assisted in said goal, right after that.

Within twenty minutes, pre-Ibrahimovic, we came back two goals, the second scored by Chris Pontius when he headed in a cross from Boateng and that wonderful goal breathed life back into the team. I emphasize this and my point that the LA Galaxy is a good team this season prior to what happened next. But, we’ll get to it.

The hope in StubHub Center was palpable. The fans were already loud, doing our best to drown out our noisy LAFC neighbors, but the energy was building. Those two goals were flashes of lightning in an important match. The LA Galaxy shirts and board read that we were unrivaled and we had to prove it.

Then, Zlatan Ibrahimovic entered the game in the 71st minute for Lletget. We had been calling for him. Still, despite what he can bring individually, the players on the field had to get the ball to him.

As soon as Ibrahimovic came on, the other nine Galaxy players on the field stepped it up. He provided enough distraction to LAFC and Chris Pontius scored two minutes later. It was just his presence that lifted the game. But, there we were only one goal back with plenty of time.

Then, in the 76th minute, our new number 9 leveled the match.

It was epic. I mean, it is the Ibrahimovic way, but to see a goal shot by him on his debut from 40 yards out after he’d spent so much time recovering and just the day before, his fitness and age being called into question.

Ibrahimovic earned a yellow card for taking off his shirt in celebration. Fans in the stands where I was did the same. The crowd really was thunderous now.

It was almost extra time and we would’ve been happy to tie. But, in the 91st minute, a ball from Cole was headed into the net by none other than Zlatan Ibrahimovic. The crowd went wild, which is an understatement. I’ve supported this team for over a decade and have seen my team come back, but nothing has ever felt quite like this.

We really wanted the whistle at that moment, even though no one had stopped cheering.

Finally, it was over. We had won 4–3. We had come back from a 3 goal deficit. We defeated our new rival.

The LA Galaxy definitely need more control of the game. I spent a good chunk of this article on the first half because it should not be forgotten in all the hype and excitement. Vin Diesel said in The Fast and The Furious that “it doesn’t matter if you win by an inch or a mile, winning is winning.” But, I want the MLS to be recognized as a solid league on its own. Ibrahimovic coming here gives it an unfair comparison to European leagues. Lletget and Pontius both deserve credit for what they accomplished this match.

I do have concerns as a fan that the Galaxy will rely too much on Ibrahimovic or that his ego will end him up on the bench, but since seeing him at the press conference, and after keeping good on his promise to help us and win, I really think he is the puzzle piece that this team was missing.

Lastly, besides stressing the point of how skillful the Galaxy are, especially when we get our designated players back from injuries, I hear that Los Angeles has one team. Sure, I want my team to win, but I welcome the new rivalry. I really want the LA Galaxy and LAFC to coexist. One of the best things I saw as I walked back to the parking lot was an LA Galaxy fan walking, talking, shaking hands and being friendly with a LAFC fan then going their separate ways.

There’s another reason this game was special. On a personal note, I was the victim of a hit and run car accident over a year ago that totaled my car and I was lucky not to have been more injured. Many people stopped to help me, but there was a Good Samaritan, George, who stayed with me, kept me calm and helped me until my father and the police could arrive. We kept in touch and to show my gratitude, I invited him to what I knew would be a phenomenal match. This game exceeded both of our expectations. It was his first professional soccer game, but he is definitely a sports person and I enjoyed going over the game with him.

What a game it ended up being. I’m glad I was there. I can’t do this game enough justice, you really had to have been there. I still can’t believe it even after rewatching highlights and the match itself to write this article.

The next match is April 8th and I’m bringing three other friends. We’ll see what that game holds.