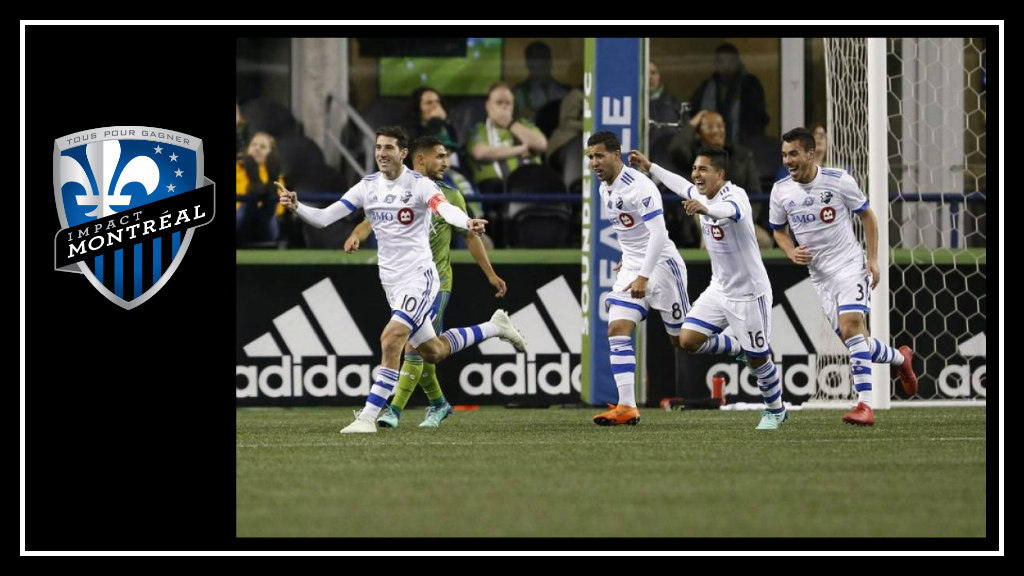 Montréal Impact fans will remember several facts about Saturday’s match at Century Link Field. In two consecutive matches, the Impact have defeated both the MLS Cup holders and runners-up. They’ve also posted their second clean sheet of the season while claiming an invaluable first road win of 2018. All of the above statements are true, however, the Impact’s win over the Sounders was nowhere near that simple!

Following a two-week international break, the Impact took to the skies. Rémi Garde’s troops were faced with the task of trying to get a result in a notoriously hostile territory. With crucially important players like Saphir Taïder and Samuel Piette having returned from overseas only a few days before making the cross-continent voyage, circumstances were not ideal.

The Impact presented their adversary a 3-5-2 lineup once again, featuring the same players who stifled Toronto FC aside from Chris Duvall, who made his 2018 season début in place of the injured Michael Petrasso.

After a somewhat lethargic start by both teams, the first half of the match saw a fairly even distribution of chances. Jeisson Vargas struck a well-hit free kick in the 17th minute, requiring Stefan Frei to make his presence known. The Impact’s defense, meanwhile, were caught on their heels and allowed Nicolas Lodeiro to remain completely unmarked at the top of the 18-yard box, where his first-time strike went narrowly over Evan Bush’s crossbar.

It was anyone’s game to win until the 40th minute. Daniel Lovitz took exception to a challenge made by Kelvin Leerdam and gave the Seattle player a shove in the chest. Leerdam responded by slapping Lovitz in the face. After consulting VAR, referee Ismail Elfath issued a red card to Leerdam. For the third time in three matches, Seattle were down to 10 men.

During his half-time interview with TVA Sports’ Nicolas Martineau, coach Garde stated that he had cautioned his players against complacency in the second half, as some teams draw energy from a sense of injustice when they go down a man. This was indeed the case for Seattle.

Despite having a man advantage, Montréal spent a large portion of the second half defending crosses and set pieces. Although Victor Cabrera and Rod Fanni demonstrated a growing partnership and understanding, the defense as a whole did not appear to be near as organized as in the previous match. Thankfully Bush was well-positioned each time a Seattle shot found its way toward his net.

In the 60th minute, the Bleu-Blanc-Noir made a rare foray into Seattle’s attacking third. Taïder’s pressing allowed him to deftly flick a poached ball to Piatti, whose dribble left Torres and Marshall befuddled. Piatti found his Chilean teammate, and Vargas found himself in the perfect spot to neatly tuck the ball into the far corner of the opposition’s net.

The final half-hour of the match saw Rémi Garde limit himself to two substitutions once again. Anthony Jackson-Hamel continued his return from injury, and Alejandro Silva made his début, relieving Ken Krolicki who put in his best performance yet.

Those thirty minutes also featured an Impact who demonstrated shades of old habits – some set pieces led to a defensive scramble and very few headers were won the first time. However, Bush’s excellent save on a Lodeiro chance in the 84th minute allowed the Impact to stake their claim to another clean sheet.

Big save by Evan Bush! Lodeiro’s service bounced around in the box and he ran onto the loose ball, but Bush did well to turn his shot away. Even with 10 men, the #Sounders have created more than enough chances. #IMFC #SEAvMTL pic.twitter.com/72UwbHXht8

The twenty or so Impact fans who made the long journey to Century Link Field were undeniably thrilled to see their team take three hugely important road points.

Although the performance was arguably the least convincing of Rémi Garde’s short time in charge, the team can begin to build off the momentum of consecutive victories as they prepare to take on a hot New England Revolution in Foxboro next Friday night.

One thought on “Painting the Emerald City Bleu-Blanc-Noir”