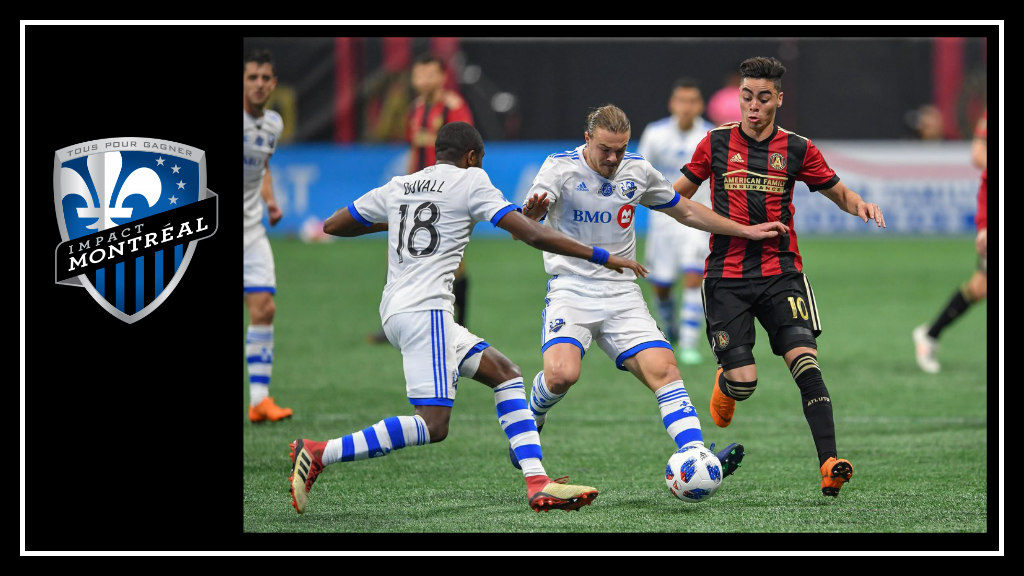 After a loss to LAFC that was so upsetting I could not even write about it, the morally-depleted Montréal Impact traveled to Atlanta United, where the likes of Miguel Almiron, Hector Villalba, and Josef Martinez awaited them. Fans were overwhelmingly pessimistic regarding the outcome of the match. Rightfully so, it would turn out.

Due to injuries suffered by Kyle Fisher, Zakaria Diallo and Rod Fanni, along with Victor Cabrera’s red-card suspension, Rémi Garde was forced to assemble a makeshift defense with the only healthy bodies at his disposal. Daniel Lovitz, Rudy Camacho, Jukka Raitala and Chris Duvall made up the backline as the Impact returned to a 4-3-3 formation. However, it was Nacho Piatti in the striker position, despite Matteo Mancosu and Anthony Jackson-Hamel’s presence on the bench.

As expected, Atlanta brought the game to Montréal. A glimmer of hope was offered in the 14th minute when Saphir Taïder headed in a cross from Duvall to open his MLS account and the scoring. The scoreline would miraculously remain 0-1 until the 70th minute, the Five Stripes enjoying over 70% possession and peppering a litany of crosses into Evan Bush’s area. Regardless of recent scorelines, Bush has truly been standing on his head lately and is largely to thank that the scoreline didn’t enter the double-digits.

For the sixth time in eight matches, the Impact gave up a penalty when Duvall committed a handball offense in the box. Almiron scored and the floodgates opened. A pair of fantastic free kicks from Kevin Kratz and a counter-attack goal from Almiron would seal the scoreline, as the Impact conceded their 16th goal in four consecutive losses.

Several of the same issues leading to the Impact’s recent losses reared their ugly heads once again: indiscipline led to a penalty and a multitude of free kicks around the box. As well, passing was wildly inaccurate. The home loss vs LAFC saw the Impact finish with an abysmal 65% pass completion rate, and in Atlanta, only 69% of Impact passes found a teammate.

The defense was incapable to shut down both LAFC and Atlanta’s dynamic players. When a keeper leads the league in saves while his team simultaneously leads the league in goals conceded, there is an enormous problem. With so many needless opportunities presented to the opposition, it is no surprise that the Impact are shipping in far more goals than they can score.

It is clear that the parity for which MLS was once renowned is quickly becoming a thing of the past, and without investing in competent players, the Impact will be left behind.

The fact of the matter is that the Impact have several contracts on their roster that are very costly to a team which operates on a small budget, notably Matteo Mancosu, Dominic Oduro and Marco Donadel. The trio who were an important part of the 2016 playoff run are now in their 30’s and earn a combined $1.4 million per year (per the 2017 MLS Player Salary List).

Those responsible for negotiating contracts and salaries have left Garde with one hand tied behind his back as he enters the league with a bevy of players who are not up to the current level of MLS on his roster. Underperforming and aging players are difficult if not impossible to transfer, so Garde must work with what he has if the team’s budget will not increase to allow for recruitment more in keeping with the development of the league.

At the end of the year, the aforementioned contracts will expire, freeing up a decent amount of money to pay new players … if it is spent wisely. This year will be a transitional year, it won’t be pretty, and it will separate the diehard supporters from the fair-weather fans.

Up next: The Impact meet with the team who started this losing streak when New England Revolution come to Stade Saputo on Saturday, May 5th.