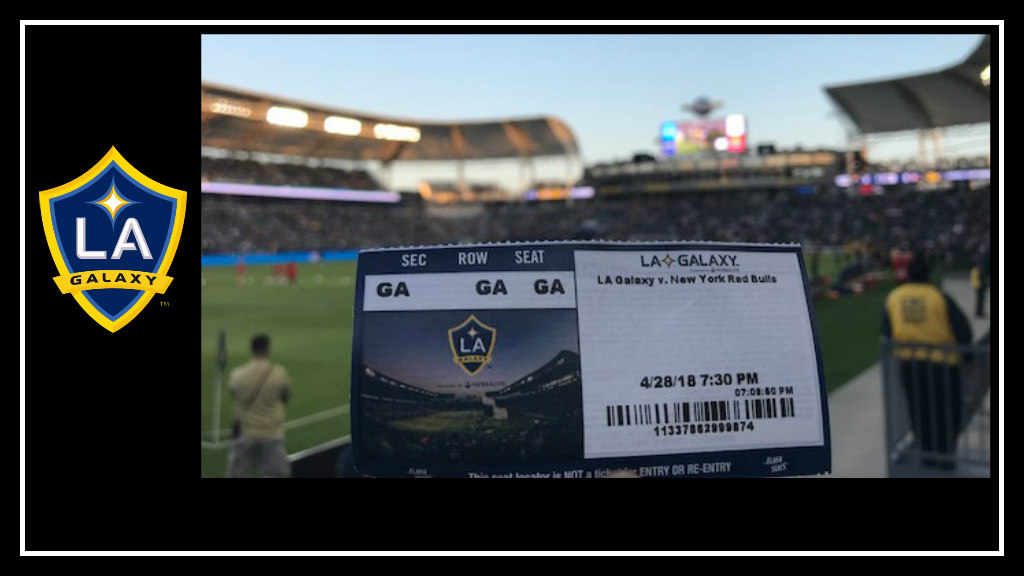 I wanted this title to reflect the ’90s, but this song by Walk the Moon makes more sense. The Los Angeles Galaxy did celebrate their last 22 years with Throwback night on Saturday, April 28, 2018. They played ‘90s music, had a discounted scarf that was the classic gold and green, and gave out a clear fanny pack.

We conceded two goals in the first half. I was sitting near the New York Red Bulls’ supporters to give myself a different experience at this match. I was by myself for the first time, but I didn’t mind since I always end up chatting with people around me. It was a near capacity crowd.

I knew I would move for the second half. I wanted a specific Galaxy jacket but found out it had been discontinued. So, I was cold and during halftime went and got myself some new gear, including that throwback scarf to show how long I’d been a fan. I have a Landon Donovan shirt that’s also the classic style, but it’s gotten small since 2005.

After shopping, I had time in the half to meet up with fellow fan, Rick Koser, who invited me to come sit with him in section 116. We chatted about soccer, of course, and got to know each other a bit; we are both SoCal natives.

I said how LAG had a good start. David Bingham had really been making fantastic saves, and the Galaxy needs to be more patient. As for the calls not being in our favor, we both expressed displeasure with VAR and the refs’ decisions. Rick, who became a season ticket member three years ago said, “the Galaxy can’t catch a break.” I agree wholeheartedly.

We noticed the confetti that seemed to keep floating in the stadium. Fellow MLSFemale writer, Jess Houwen, texted me asking if it was confetti she was seeing on her screen. According to this tweet, this is why…

With half roofed stadiums there is a circulation conundrum called “vortex caldecott” which basically causes confetti to float endlessly when the weather conditions are perfect.

We continued to watch our beloved team fight for us.

Romain Alessandrini kept the ball in play and even slid to keep it in the 63rd minute. He took on the defenders and after the 73rd minute, he faced a RBNY player one on one “dancing” with him to keep possession of the ball. He really stood out most to me in both halves.

Then, as fate would have it, a penalty was called and RBNY’s Alejandro Romero scored in the 84th minute.

Even with five minutes extra time, the Galaxy came up short and lost at home again.

The New York Red Bulls played a good game. Florian Valot scored a great goal in the 49th minute. This was a team that played in the CONCACAF Champions League. They’re tough and were also coming off a previous home loss, so I can’t emphasize enough how proud I am of my LA Galaxy to take them on and score two goals.

At times it felt there was a magnetic field around the net for the Galaxy when they tried to score. The calls against us really seemed to take the wind out of the LA Galaxy’s sails. Alessandrini was understandably frustrated since his goal in the first half had been rescinded post celebration per VAR.

I could blame the refs more, but there’s no point here. I’ve watched the United States Men’s National Team fight in the World Cup against bad, and what we see as unfair, calls; it’s how the game goes sometimes. We got to push on despite that. They really did fight til the whistle blew.

Sebastian Lletget played a full 90 minutes since his injury.

I want to focus on our progress. I mean, Gio Dos Santos scored, y’all! Ola Kamara scored. Everyone on that pitch: the starting lineup and subs Emmanuel Boateng, Chris Pontius, and Daniel Steres put in their best effort.

It’s going to be tough ahead as we have a three-game road stretch. I have all the faith in my team and wish them well as injuries continue to plague the soccer world.