A Matter of Pride and Its History 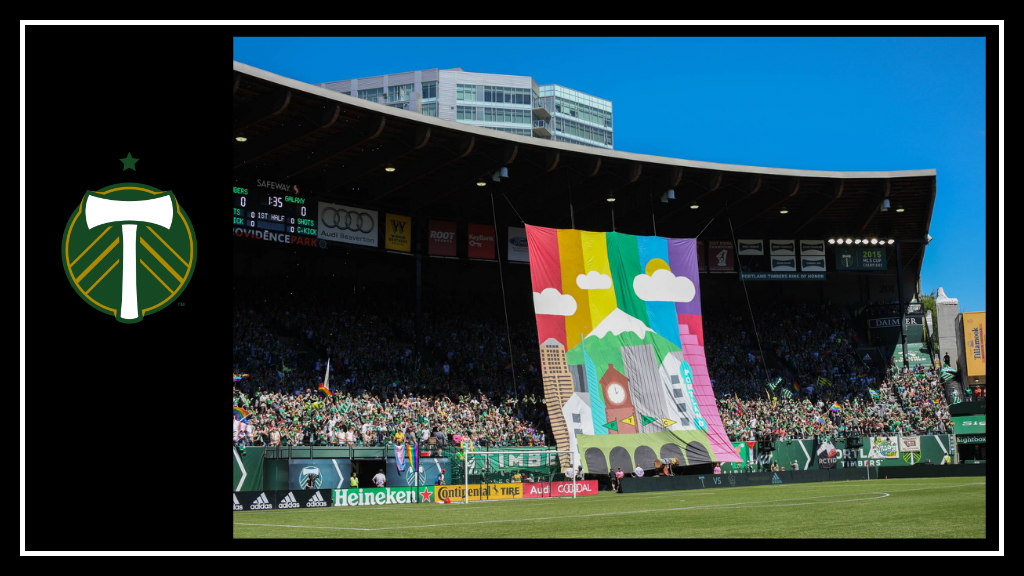 It’s Pride Month.  Many teams in MLS and NWSL are officially celebrating with Pride Nights. Many supporters are engaging in #PrideRaiser campaigns to benefit local LGBTQ-friendly organizations (The Timbers Army and Rose City Riveters both have campaigns to benefit Portland’s own OutsideIn). Individual players have also gotten involved in #PlayingForPride.

The Timbers’ own Zarek Valentin, for example, was already committed to a pledge of his own before a rash bet he made forced him to follow through on a promise to wear a Hayley Raso bow in his hair for a match, which turned into an upcoming second Pride fundraiser:

I’ll be playing for pride this month and donating:

All donations will go to @AthleteAlly

RibbonZ/ Fear the Bow is our local campaign this coming week which will be super dope as well. #PlayingforPride #RCTID https://t.co/quC3yrIIYO

At the national team level, both the USMNT and USWNT are honoring Pride month, with rainbow numbers on their jerseys, just as they did in 2017. This past week, we learned that Jaelene Hinkle declined the opportunity to play for the national team last year because, as she put it, “I just felt so convicted in my spirit that it wasn’t my job to wear this jersey.”

At the time, the press release announcing her withdrawal cited “personal reasons;” this week, she chose to share the reason for her withdrawal on the Christian Broadcasting Network’s 700 Club.  This announcement, just a few days before the start of Pride month celebrations, was met with a less than friendly reception in Portland, where she was met with boos from the Portland stands and at least one snarky two stick:

And, of course, there are those who react to displays honoring Pride Month that folks just “stick to sports.”

Here’s the thing about “sticking to sports”– it should never come at the expense of standing up for human rights.

I completely understand devotion to religious ideals. I was reared American Baptist, went to church three times a week for eighteen years, had family Bible study every morning. But it is not lost on me that the American Baptists were initially the Northern Baptists, who split with the Southern Baptists in 1845 over the issue of using religious interpretations to justify slavery and racism.

Want an extreme example of using religion to treat your fellow human unjustly? Look no further than, for example, Southern Baptist pastor Thorton Stringfellow’s 1860 Cotton Is King, And Pro-Slavery Arguments:

Jesus Christ has not abolished slavery by a prohibitory command…the principle relied on for this purpose, is a fundamental principle of the Mosaic law, under which slavery was instituted by Jehovah himself…It is only sober truth to say, that the institution of slavery has saved from the sword more lives, including their increase, than all the souls who now inhabit this globe. Under the gospel, it has brought within the range of gospel influence, millions of Ham’s descendant’s among ourselves, who but for this institution, would have sunk down to eternal ruin.

My point is not to run down Southern Baptists, or people of any particular religious belief. Throughout history, one can find similar examples, from many faiths. My point instead is to note the danger of using religion to justify inhumane treatment of others, of treating fellow humans as “less than.” I picked slavery as just one obvious example.

Unequal treatment under the law has happened and continues to happen throughout the world based on race, gender, and sexual identity, among other personal characteristics. In our own country, there have been statutes on the books for persons perceived to be wearing clothing not belonging to one’s gender, or for simply gathering in the same establishment together.

Fighting for the rights of LGBTQ to exist and to expect equal treatment under the law arguably came to a head in this country during the Stonewall Uprising in June of 1969, which is the reason Pride Month is historically celebrated in June in the US.

Do you think discrimination against LGBTQ folks isn’t still a problem?  Try engaging in a Pride parade in Turkey or Uganda. Think it isn’t a problem in the US any more? Note that, as of this 2012 Williams Institute study of agencies who serve the homeless in the US, 40% of the homeless youth they serve are LGBTQ youth.

Let us also remember that much of the soccer world’s recent celebration of Pride Month has been in response to inhumanity. Less than a week after the Pulse nightclub massacre, US Men’s National Team captain Michael Bradley donned a rainbow armband to show his support for the LGBTQ community. And in 2017, Orlando Soccer Stadium unveiled rainbow-hued seats honoring the 49 victims of the tragedy.

It is in this context that the mens’ and womens’ national teams have worn Pride jersey numbers. It is critical to remember that Pride jerseys, parades, and events are not simply to “celebrate” one’s sexuality. More importantly, they are to recognize that all people are worthy of respect, dignity, and basic human rights.

Sometimes some of us in the Timbers Army joke that soccer is our religion, complete with Providence Park as our “church,” games as “worship services,” and songs and chants as our “hymns.” And when it comes to freedom of expression, we’re very good at that in the stands as well, booing both silly and not-so-silly things that take place on the pitch. But I take religious freedom and human rights very seriously.

Sometimes one’s religious tenets forbid eating certain foods, or eating at certain times, or marrying outside the faith, or uncovering one’s hair, or shaving one’s beard, or any of a thousand individual choices. Thankfully, the Constitution protects our freedom of religion. Nobody should be forced to follow a particular state religion, or be denied the opportunity to worship as they choose.

At the same time, nobody’s religious beliefs can be used as an excuse for unequal treatment under the law, let alone to foster an atmosphere where hatred and violence against a class of individuals is somehow regarded as acceptable. Just as it is abhorrent to conceive of using religion as an excuse to allow slavery and racial discrimination to exist, so, too, it is abhorrent to use religion as justification for unequal treatment of LGBTQ persons.

Jaelene Hinkle has the absolute right to worship as she chooses, to profess her faith, and to refuse a national team callup for any reason. I hope that eventually she also learns the difference between religious observance and creating space in the larger world for hate and inequality to thrive.

I will boo the heck out of hate and inequality whenever I see it; and I will also boo when I see people creating the space that allows it to continue to exist.