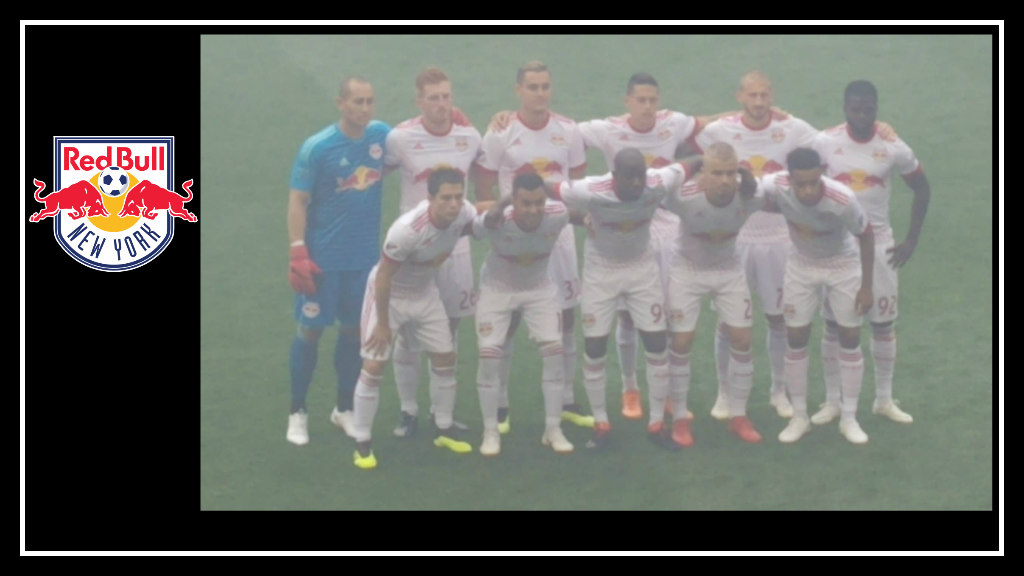 Is there such a thing as too much soccer? For ten days now, we’ve been fed three square matches a day thanks to the World Cup. And while the rest of the world’s clubs rest and prepare for transfers and tournaments of their own, Major League Soccer got back to it with ten games this weekend.

So is there such a thing as too much soccer? Um… no. Let’s get this party started.

ROCKET’S RED GLARE: The fireworks began right at the beginning. Literally. There are those who say “no pyro, no party,” and the flashpots and sparklers during the walkout and the National Anthem were proof of that. And while I didn’t get to see the post-game fireworks myself, fans were quite pleased.

BABY, YOU’RE A FIREWORK: The game started a little messy. There were a number of scrappy battles for the ball. But then Tyler Adams won a ball from Kellyn Acosta and crossed the ball to Bradley Wright-Phillips for a tap-in (23′).  This was his eleventh goal of the season, one step closer to 100 career goals.

“Aaron is always a threat. He’s so good in the air. He’s very athletic and so he’s always good on set pieces. We run a lot of things to try to free him up and try to get him opportunities, so great for him to get a goal.” —Coach Jesse Marsch

CHERRY BOMB: Well, this was a little awkward… Danny Royer, who we know is a very passionate player, appeared to stomp his opponent. He was given a yellow card in the 25th minute. Enter the Video Assisted Referee, and the yellow becomes a red. Royer is sent off for the first time ever. Here- I’ll do the math for you: that’s SIXTY-FIVE minutes (before stoppage) down one player. Yikes.

BOOM BOOM BOOM: The team seemed to take Royer’s absence and let it fuel their attack. A corner kick from Sean Davis (40′) connected with Aaron Long for a goal. Enter VAR once again.  There was a question that FC Dallas goalkeeper Jesse Gonzalez was fouled upon. But after review, Long was indeed awarded the goal, his second of the season.

SHOOT ACROSS THE SKY: When the second half began, the 9 field players remaining lined up in two rows of four and put one up top. Since they were up by two goals, it wouldn’t have been much of a shock if they just did what they could to hold on.

Nobody told Kemar Lawrence that. In the 48th minute, a pass from Alejandro “Kaku” Romero Gamarra found Lawrence, who popped the ball into the net to effectively sew up the match.

“You know, I’m not one that is all about the goals, I’m more about clean sheets, my team getting three points but getting the goal was fun. The guys created a great play, snuck me in, I got a good touch and nobody was in the box for me to pass to so I decided to shoot.” —Kemar Lawrence, describing his goal

The Red Bulls head to the Great White North and BMO Field to face a faltering Toronto FC, who just lost to NYCFC in Yankee Stadium this weekend. There were different fireworks last time they met there…