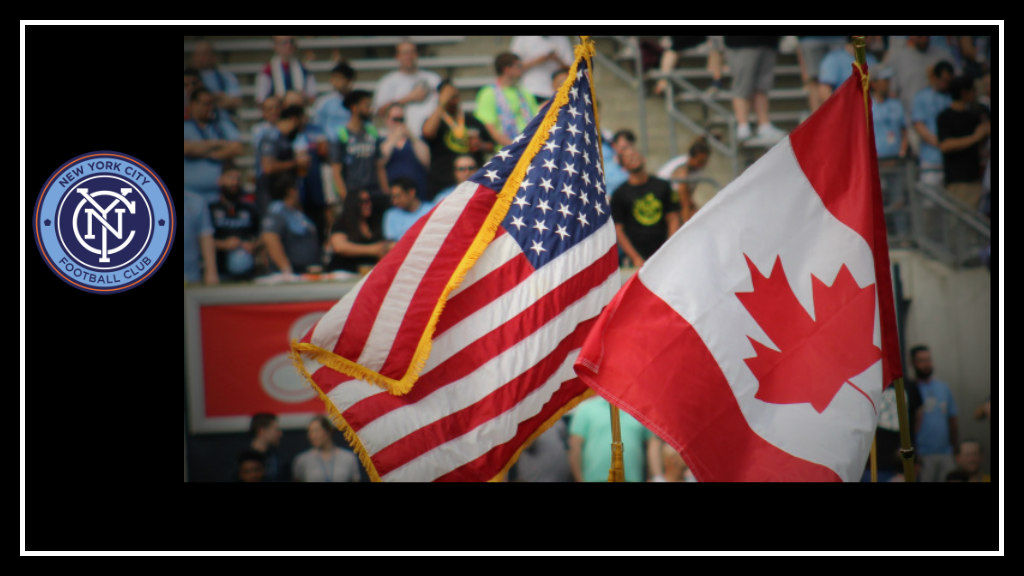 However, in the days leading up to this game, the first after beloved head coach Patrick Vieira departed for his new position at OGC Nice, there were many doubts as to whether “Domè” would obtain work visa clearance in time for this game.  Fans speculated as to who would lead the team against Toronto, should Torrent be delayed.  Luckily, approvals came through and he was able to lead a short team training session on Saturday.  It wasn’t a shock however that there weren’t any big changes to the starting eleven from the draw with Atlanta United on June 9th.

Although NYC had more possession in the first half, they went down a goal when Victor Vasquez scored in the 37th minute.  The Boys in Blue stayed calm and continued to press and came out in the second half with more energy and verve.  Although City’s possession went down, they won more duals and utilized more crosses.

Fans didn’t have to wait long in the second half for the equalizer.  Jo Inge Berget cleverly and unexpectedly took a heel flick shot behind him on a pass from Jesus Medina and it was as if a collective sigh of relief was released in the stadium.  It was even now and anyone’s game.

At the 68th minute, Maxi Moralez weaved his way towards the goal releasing a centering pass which Berget perfectly placed into the back of the net. The stadium went wild.  A brace for Berget!  Did Domè successfully break the curse of Berget? Hope was alive and kicking with NYCFC fans in Yankee Stadium.

However, any  time we play Toronto, I am nervous about “the Silent Killer” (no not carbon monoxide), Sebastian Giovinco.  Giovinco can strike from anywhere at any time and you don’t see him coming.  Fortunately, NYCFC did an excellent job of containing him.

According to defender Ben Sweat, “Obviously Giovinco is one of the top players in the league.  We knew we had to watch the spacing behind and we knew we had to be smart and be tight with him.  With those kinds of players you have to be super aggressive and I thought the midfield did a really good job with that.  Shutting down Giovinco, shutting down Vasquez today.  It was good.”

Midfielder Alex Ring concurred: “Overall I think it was a good performance.  We played well between the zones and I was able to get a bit more offensive.”

The unfortunate side effect of this match was an injury to captain David Villa, who requested a substitution in the first half.  Details on his injury will be released later this week but Coach Torrent stated, “I spoke with him [Villa] and he told me it’s not serious. We are waiting for the doctor. I think it’s not bad, but maybe he needs one or two games.”  Fans are hoping for his quick and thorough recovery and, based on this performance, are optimistic that the team can continue to be successful even without him on the pitch.

It was the battle of the two smallest #10s in MLS. Giovinco’s nickname is “The Atomic Ant” while Moralez has been called “El Frasquito” and more recently “Spider-man”.

Thanks to an introduction by NYCFC president Jon Patricof, I got to meet one of the rare female referees in the world of soccer, Kathryn Nesbitt.  Nesbitt served as an assistant referee in this match.