Another type of pro in Dallas: Alan Avila 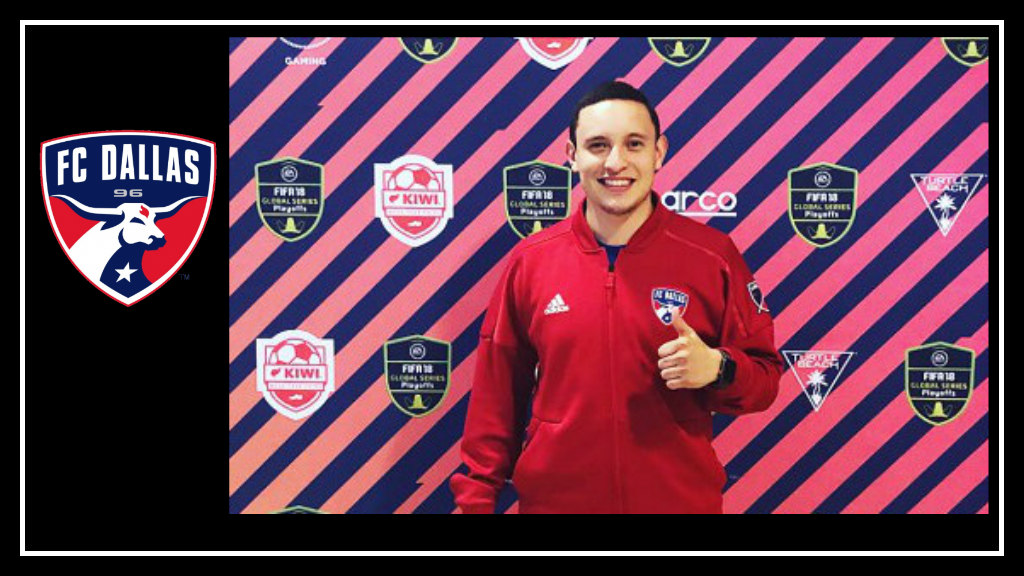 It may seem like it has been awhile, but it was only in April that we saw our first MLS Cup winner of the year… an eMLS Cup winner. The buzz and hype around the eMLS Cup in Boston this past year was just something I couldn’t get enough of. Seeing supporters of all clubs actively backing their professional gamers to defeat opponents game after game was awesome.

I couldn’t help but be curious as to this notion of signing a professional gamer to MLS clubs and how people even got there. As a teacher, I see middle school students trying to play video games in class. I’m actually pretty sure if I brought in my XBox and allowed them to play FIFA in class, we would have an all-out tournament. However, according to Forbes.com, esports is on track to bring in $900 million in revenue this year. You guys… $900 million.

It’s no wonder that MLS has started signing their own eMLS players as this is a huge market that any business would be crazy to not touch.. So, my next challenge? Talk to the FC Dallas eMLS player who made it all the way to the Western Conference Finals, Alan Avila.

I started playing soccer ever since I was four. My dad made a local team and coached me all the way up until my club soccer years. My first club team was the Dallas Texans. I started traveling 5 hours to Dallas and Frisco just to play my league games on the weekends, so it was a sacrifice I had to make, but it was all worth it. 1-2 years later, I joined FC Dallas’ Youth system and played in the Classic League. I played at Robert E. Lee High School in Midland, Texas. I was on Varsity since my Freshman year. Unfortunately, my sophomore year of High School I tore my left ACL and had to miss most of the season. I then went on to play my junior year. My senior year, I tore my right ACL and unfortunately had to sit out my entire senior year. I had surgery again and recovered just in time for collegiate soccer at the University of Texas of The Permian Basin. During preseason I re-tore my right ACL. I had surgery, recovered, but then started focusing more on FIFA and YouTube.

I read in your interview with FC Dallas that you started playing FIFA after your third ACL injury. Surely to be as good as you are, you were playing the game before you decided to start competitively. Was playing video games always a hobby of yours?

Playing FIFA was definitely a hobby of mine ever since I was in elementary school. My soccer mates and friends would always get together and play against each other and have tournaments. It was something I really enjoyed to play whenever I was not playing actual soccer because I just love soccer so much. FIFA, the video game, helped me learn more about the game of soccer. I would always try out new moves or passes that I would see in FIFA on the field. FIFA was a nice hobby to have as a soccer player because during the offseason or whenever I wasn’t playing actual soccer, I would start up FIFA and start playing. I believe many soccer players love to play FIFA.

With that, how did you decide to become a professional FIFA player? What is the process for those who didn’t know this e-world existed?

I got very fortunate with timing because, during my third ACL surgery recover, FIFA 17 introduced a new competitive game mode called “FUT Champions”. It is a competitive game mode where you play 40 games a weekend against the best players on your continent and compete with everyone from around the world. I started finishing in the Top 100 in the World leaderboard by winning 38, 39, or even 40 games out of the 40 we were required to play. It was no easy task by any means and it still continues to be very difficult. I then started qualifying for FIFA tournaments through FUT Champions and that’s how I made a name for myself. I posted YouTube videos and people started subscribing and really enjoying the content. In FIFA 18, the current FIFA, I did the same thing. The eMLS was introduced and luckily FC Dallas was able to scout me as a local Elite FIFA player and that’s how I signed my first professional contract. I stayed ranked among the best 100 players in the world. I qualified to the biggest tournament in Amsterdam hosted by EA Sports FIFA. It’s a continuous craft that I need to keep practicing and mastering.

When you saw other teams in MLS start to sign eMLS players, what were your thoughts? Did you initially reach out to FC Dallas about playing for them? How did the actual signing for you happen?

I have always brainstormed the idea of the eMLS becoming a thing long before it actually became an official thing. I saw other leagues around the world have their own FIFA leagues and it was something that I wanted to see in the USA and Canada with the MLS. When I found out about the eMLS actually becoming a thing, I was super excited because I knew that it would attract many people and that it was a great thing for competitive FIFA and the league. Like I stated in the previous question, FC Dallas did their scouting and found out about me through media sources and all of the FIFA rankings there are. They found out that I was a part of the actual FC Dallas youth program so it was just a great match for their program. I was invited to come down to Toyota Stadium and talk to everyone involved with FC Dallas and that’s where it all began.

Tell us more about the first eMLS Cup. I saw online that only current MLS players are available for teams. What were the other guidelines? How did you decide what squad to field? As a general fan, I didn’t know that you weren’t playing with the full FC Dallas squad. Tell us more about what goes into choosing the team you play with. How does your knowledge of playing soccer give you an advantage while playing people who maybe never have touched a ball in their life?

The first eMLS Cup was a success and a great experience. The guidelines were that we had to have three MLS players on the field at all times, two of which had to be from the MLS club you were representing. When I found out about this, I knew that I had to plan correctly and make a squad that would most benefit me. There is a lot that goes into making a squad to play with on FIFA. Many people want the fastest and most technical players.

In FIFA, there are 6 different categories that distinguish a player. There is Pace, Shooting, Passing, Dribbling, Defending, and Physical. As you can probably tell, everyone competing wants the players with the best overall attributes. FIFA has done a great job in making the game very realistic. This means that the players seem to perform as they would in real life.

Ronaldo, Messi, and Sergio Ramos are players that mostly everyone had on their squad in the eMLS. So if you are knowledgeable in soccer, making a squad in FIFA would become much easier because you will know what you are working with and how to use the players in each position to their best possible potential. I decided to use Kellyn Acosta and Urruti from FC Dallas because Kellyn had the physical and defending aspect of a midfielder and Urruti had the goal scoring ability. My third MLS player was Alessandrini because of his speed and ability to score. Many competitors selected Alessandrini for that exact reason.

How was the first eMLS Cup? What were the vibes like? Did you previously know any of the other eMLS players from the gaming community and your previous competitions?

The first eMLS cup was a great experience even though I was eliminated in the Western Conference Final. I definitely learned a lot and cannot wait for the next one. The vibes were great. Everyone was excited to get the first eMLS cup underway. It was an honor to be representing the club. Many players including myself played with immense passion for the club and wanted nothing but the best for all the fans and club. The vibes were honestly everywhere. Excitement, curiosity, anxiety, sadness, disappointment, thrill, and a whole lot of adrenaline was seen by everyone throughout the eMLS cup.

I did know most of the players from the online leaderboards, previous tournaments, or even social media. It was nice to be able to actually meet up with them in person and share a great experience. Some of them even knew me from watching my videos on YouTube so it was really nice being able to meet everyone that I hadn’t before.

So now that this tournament is over, what’s next for you? How long are you in a contract with FC Dallas in this position? What are your overall goals?

Now that the eMLS Cup is over, I need to focus on any major EA Sports tournaments I have. I also need to focus on being more active on social media whether it is via YouTube, Twitter, Instagram, and even Snapchat to build a close community of great people. I also need to continue practicing a bit for whatever tournament is next. Most tournaments are over with for FIFA 18 so now I can take a little break and focus on starting strong in FIFA 19 in September.

I am in a contract with FC Dallas for a year but I’m hoping to sign again for the FIFA 19 season. There are many goals that I wish to accomplish. I want to win the eMLS Cup and any other major global tournaments. I also want to really build a community on YouTube and social media as a whole to help others in FIFA, their life, or whatever the case may be. Someone that they can look up to and enjoy being a part of the experiences.

For all of the aspiring eMLS players out there, what is one piece of advice you would give so that they could be the next eMLS player for their team?

One piece of advice that I would give to aspiring eMLS players is to never give up and learn from every loss. That is how you not only grow as a player but as a person as well.

And finally, if you could field your perfect 11 (not within the confines of eMLS Cup), who would your lineup be?

My perfect eleven would have to start off with David De Gea in goal. Marcelo at left back. Sergio Ramos and David Luiz at the center back positions. Kyle Walker at right back. Modric, Pogba, and Iniesta in the midfield. Messi, Ronaldo, and Neymar up top.

You can follow Alan Avila on Twitter at @AlanAvi_ to see everything he’s up to and keep an eye on his gaming!