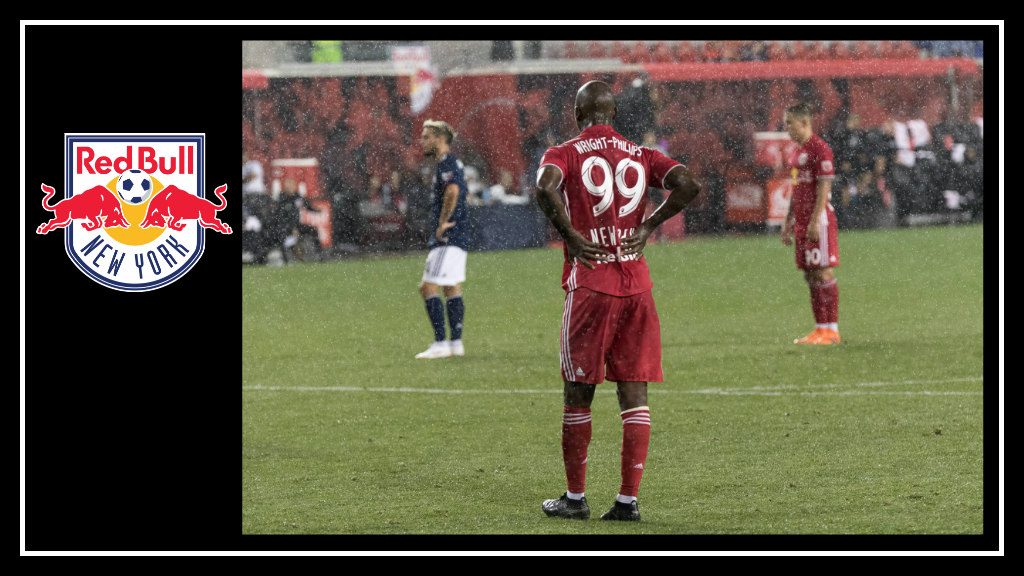 Like most game days, I woke up with sunshine and optimism. So I had to spend my day at work. no big deal. I just had to book it to Red Bull Arena (no easy task, as I’m still in an ankle brace). But I had to outdrive the rain.

And still, it followed me.

I’ve been at the arena in rain –and snow– before. But the overhang at RBA (that makes it look like an energy drink spaceship from the outside) means that very few spectators have to worry about looking a mess.

SOMETHING NEW: The day before the match, the New York Red Bulls announced their signing of Andreas Ivan, a 23-year-old Romanian midfielder who has been playing in lower divisions in Germany. While coach Chris Armas has indicated that Ivan will be integrated as soon as possible, it wasn’t quite as fast as Tim Parker‘s entry at the beginning of the season. I happened to see him after the game as Ben Mines brought him into the locker room.

TAKE TWO: The last meeting between these teams ended with the New England Revolution taking all three points. RBNY weren’t about to let that happen again, especially not at home. The Red Bulls’ home record is impressive, now 8-1-1. It wasn’t going to be easy.

Some people may have written off the Revolution at the beginning of the season, but new head coach Brad Friedel has done some impressive work with the team. Armas made a point of saying that both teams play a similar style, which was going to make things difficult.

IN THE CARDS: Did you know soccer is a contact sport? It may not be like gridiron football or ice hockey, but there’s no doubt that physicality is key. And there was plenty of physicality to go around. Thirty fouls total from both teams. Four yellow cards: Aaron Long and “Kaku” Romero in the first half, Antonio Delamea and Luis Caicedo in the second. The wet conditions on the field didn’t help either, as pushes became shoves and clean slides devolved into brutal tackles.

SCORE, AND SCORE AGAIN: If you watched the World Cup, you ought to know that set pieces are a wonderful thing. Breakout difference maker Marc Rzatkowski, fresh off his two-goal performance, tallied an assist with his free kick that found its way to Daniel Royer‘s foot. In the hubbub in the box, Royer tucked the ball away (70’).

Then came number 99 for Number 99. Bradley Wright-Phillips nailed a header into the goal from Kaku’s cross (80′). History could have been made when a call for a handball in the box was about to put BWP at the spot.

Say it with me now: ENTER VAR. The handball call was overturned.

After the game, Wright-Phillips said he was rather relieved that his 100th goal didn’t come from the spot. He doesn’t usually attempt PKs anyway. How would he prefer to score his 100th goal? “A bicycle kick from midfield,” he quipped after the game. That should work. Wayne Rooney and DC United should be worried.

The Red Bulls’ next game is at brand new Audi Field.  RBNY fans call these next few days #DCHateWeek, a nod to the MLS 1.0 Atlantic Cup rivalry. Will we see history then? Nobody, no nobody is gonna rain on my parade!