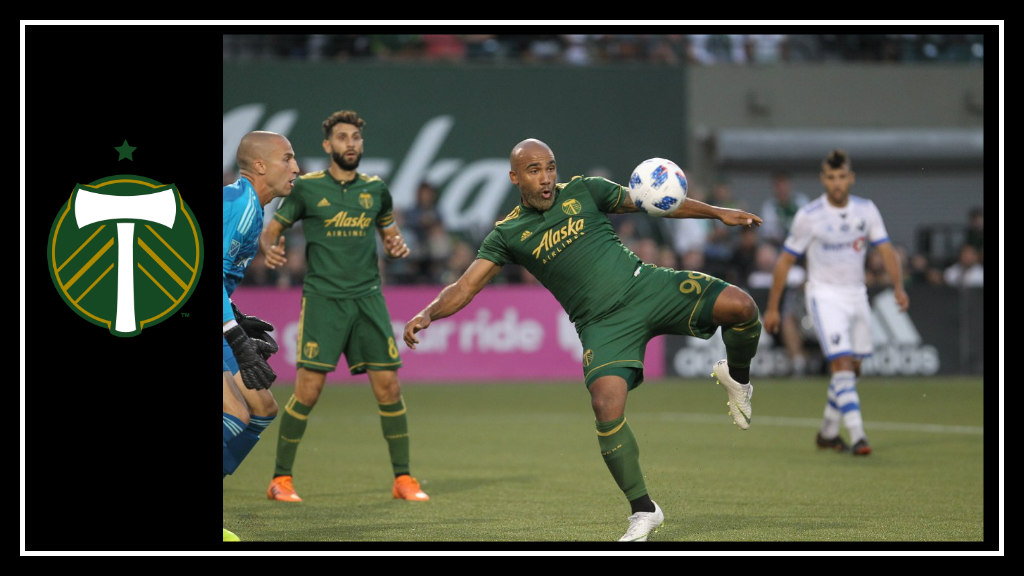 On a warm night in Providence Park, the Portland Timbers came from behind against the Montreal Impact to draw 2-2, extending their regular season unbeaten streak to thirteen games and maintaining their playoff spot in the standings in the West. While we all would have wanted three points coming into this match, it’s not a bad result for a team playing their third game in seven days, with two of them on the road, in hot weather, against a formidable opponent earlier in the week.

The first half, the Timbers certainly looked like a team that had played their hearts out more than once already in the last seven days. A little slower than usual and a little out of step, the team had some trouble putting passes together, especially in the middle of the pitch. A sloppy pass to Julio Cascante to the right of the box was particularly painful, as it lead directly to Montreal making a successful counter, with Saphir Taider finishing off the play to put Montreal ahead 0-1:

Despite coming out a little flat-footed, the Timbers were still able to answer back, as a scramble and slapped-out-rather-than-grabbed save by Montreal keeper Evan Bush gave Samuel Armenteros just the opportunity he needed to finish off and put the Timbers level again:

The elation in the crowd was short-lived, however, as a beautifully placed pass led to a second Montreal goal, this time from Matteo Mancosu not two minutes later, to put Montreal ahead 1-2:

From my vantage point on the west side, the pass happened so quickly that I wasn’t able to tell at the time if Mancosu was offside when the ball was released, but a quick review of the video after the match confirmed that, indeed, it was simply a perfectly timed ball past our defense. Definitely a tough moment, and one that could have deflated the team going into the half, especially after a long, difficult away week.

Fortunately, though, the team came out for the second half with renewed focus and energy. Diego Valeri had a chance at 52′, and he finally sealed the deal at 65′:

I happened to be in the North End behind the goal for this one, and I had a great look at Valeri as his concentration and effort was laser-beam focused on seeing where and when that ball was coming down so he could head it into the back of the net. Seeing him putting 100% of his attention on directing that ball properly, there was never any doubt in my mind that he was going to score.

The Timbers could have pulled back and settled for the draw; but they continued to press the attack, looking for the go-ahead goal. Unfortunately, it never came, with the 2-2 result as the whistle blew.

Sam is a closer. The video from his 2016-2017 season is not an aberration: Armenteros is a finisher. When Bush let the ball go, Armenteros did not hesitate. He knew how to find the back of the net. He is dangerous if he is anywhere near the ball inside the 18. He is clearly both fiercely intelligent/situationally aware when he is near the goal, and he has the skill set to finish the job. I am more than okay with this. (And honestly any excuse I get to throw in a link to Armenteros highlight videos is also fine with me.)

Take your chances, wherever you find them. Sometimes, the night is yours because of flawless passing, harmonic team movement, and clinical strikes. And sometimes it is yours because somebody else screws up, and you take advantage. All four goals happened because players on the opposing team made mistakes, and the attacking team seized the opportunity they’d been given. Whether it is a bad pass by your opponent, defenders shading too high, or a keeper slapping and/or punching a ball and failing to clear it effectively, sometimes this game is about taking advantage of errors made by the other guy. Kudos to the Timbers for taking their moments when they presented themselves.

We have more than one Diego MVP on this team. I LOVE Diego Valeri, but holy cow, there is an argument to be made that the Most Valuable Player to THIS squad is Diego Chara, who missed this match due to yellow card accumulation. Do you know how many games we have won in the last three years when Chara is on the team but not in the lineup? Zero.

Since he signed with the club in early 2011, we’ve only won SEVEN games in all of that time without him in the lineup (eight if you count the play-in, which was technically a draw but of course had to be settled with some, er, memorable kicks from the mark). And since mid-July 2015, the team has gone 0-10-8 in his absence. We all know Chara is good, but his presence is critical to our success in the middle of the field. And (whispers) he is 32. I don’t want to think about the day, hopefully far, far off, when he hangs up his boots, but I’m sure the scouting staff has to be thinking about what the succession plan is. I certainly don’t envy them.

For many Timbers Army and Rose City Riveters members, game day actually started pretty early. 26 of us participated in our first round of bystander intervention training. A combination of 107 Independent Supporters Trust board members, game day ops volunteers, and 107IST supporters spent 3 1/2 hours of their Saturday morning engaged in learning what we can do as bystanders to prevent, de-escalate, and intervene when the potential for verbal, sexual, and/or physical abuse/violence is present:

These people are committed to doing good things for Team, Town, Riveters, & TA.
Don’t ever doubt it.
Bystander Intervention Training, to help keep the NE a safe place for everyone. Proud to be associated with @PDXRivetersSG @timbersarmy @107ist #rctid #BAONPDX pic.twitter.com/aP0repIcZW

Born out of a desire to continue to improve the culture in the stands and to be pro-active to make sure that the stadium is a place where we can all feel safe and welcome as we jump and clap and sing for victory, the training was an excellent opportunity for participants to add to our toolkit. We spent a lot of time talking about how to recognize the potential for trouble; the kinds of responses bystanders can undertake to intervene; and working through specific scenarios to get a little bit out of our comfort zones, to be better prepared to be proactive bystanders, taking care of our fellow humans. We had an overwhelmingly positive response and will be continuing to offer training in the future, with the next session to be held in August.

Next up: the Timbers take on the Houston Dynamo at home this Saturday. See you then!