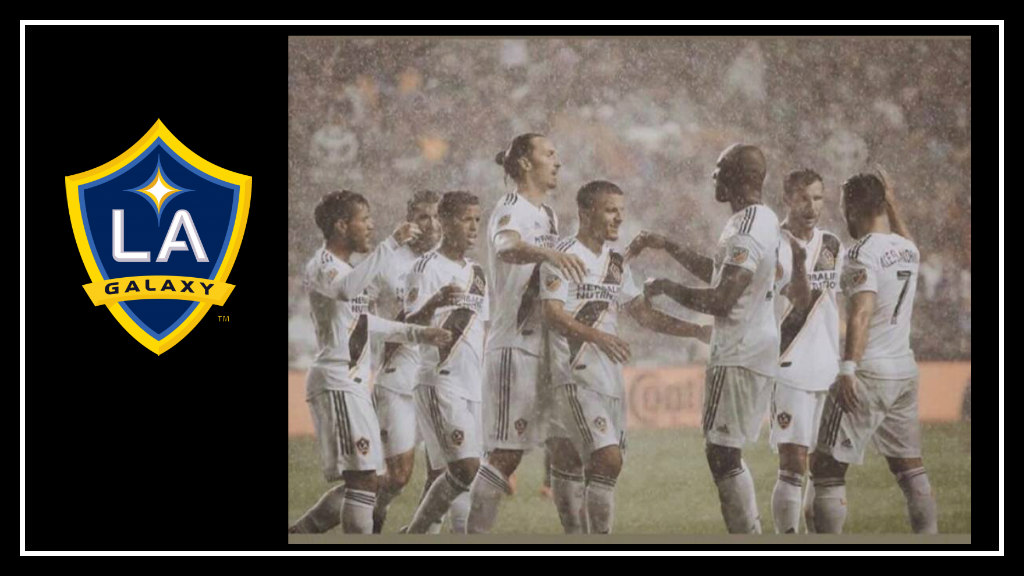 It was a 67-degree evening. The wind was 16-20 mph. The rain was incessant. I watched from my best friend’s comfortable couch as he’d recorded the match for me.

Zlatan Ibrahimovic wore the captain’s band since Ashley Cole was suspended for this match due to a red card last match.

The game itself started pretty even. The ball moved back and forth to each end of the pitch, the LA Galaxy and Philadelphia Union each with a few chances. The visiting team started the scoring when David Bingham made a save, but due to poor clearance, it redirected and penetrated the net.

By the 38th minute, possession was 50%. The Galaxy had had a few shots and corners. Ibrahimovic took a long shot and the home keeper, Andre Blake, managed to get a touch on it to keep the first half scoreless, despite giving the G’s a corner.

In the 45th minute, Romain Alessandrini came on for Tomas Hilliard-Arce and this would prove to be a game changer.

In the 47th minute, Jonathan Dos Santos intercepted a Union pass, kicked the ball to Ibrahimovic who then passed it to Ola Kamara who was on a run, scoring his 8th goal of the season, and leveling the match 1-1.

The rain really started to come down, but that didn’t stop LA’s momentum. The Galaxy’s next goal came in the 62nd minute, scored by Ibrahimovic on an assist from Alessandrini.

In the 74th minute, Dave Romney took an elbow to the face as he did his job defending and he started bleeding from his mouth and apparently lost a tooth for the second time in his Galaxy career. He stayed in the game, though.

The Galaxy made their second sub, Chris Pontius was taken out for Sheanon Williams in the 79th minute, which ended Pontius’ 7-game contributing streak. Still, the Galaxy were up 2-1.

David Bingham made big saves to keep the advantage.

Alessandrini took the corner in the 82nd minute, which Michael Ciani got a header on. The score was now 3-1 in favor of the Galaxy.

This was the LAG’s third win in a row since 2017, making it a seven-game unbeaten streak. They have climbed their way up to 4th place in the Western Conference. It seems the team is finally on the same page.