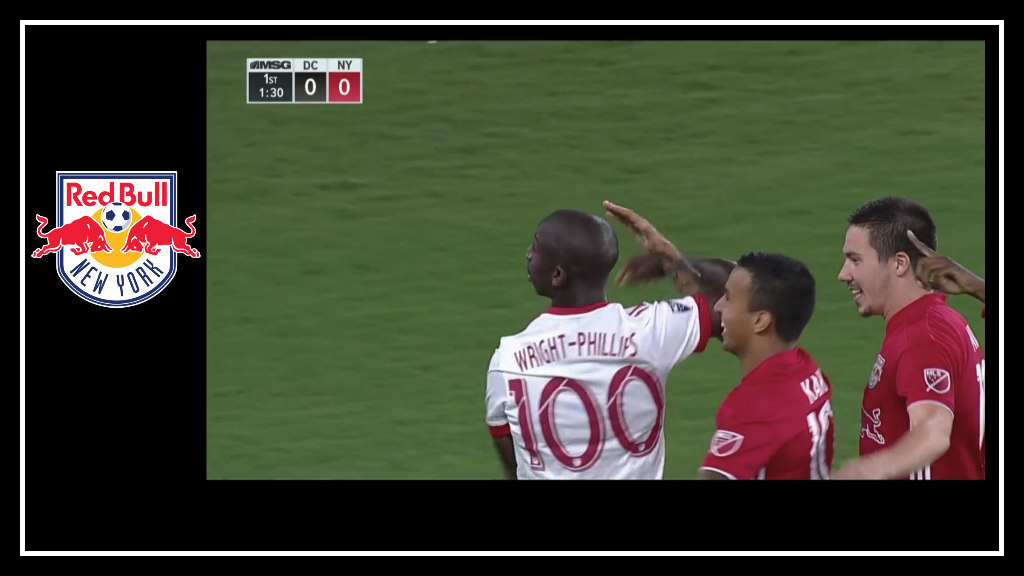 Finally! The Atlantic Cup. The OG rivalry. DC United. Recently opened Audi Field the venue, this was a night for history.

Okay… a *late* night for history. After an extended winter, the Northeast has decided to try on monsoon season. While I would have loved to have made the trip down to DC, it wasn’t in the cards for me. And looking at the scenes at Audi Field, I’m okay with that.

WE’LL GO DOWN IN HISTORY: Just two minutes into the first half, striker Bradley Wright-Phillips found the ball from “Kaku” Romero and made his shot. It wasn’t a bicycle from midfield, but a nutmeg that blasted past goalkeeper David Ousted. His 100th MLS goal. And his celebration was worth the yellow card given for it: BWP yanked off his ’99’ jersey to reveal a ‘100’ jersey. Shout out to Sean Ruiz, RBNY’s kitman.

JUST ONE MISTAKE: DC responded with a goal of their own (Paul Arriola 28′). But guess what, folks?

Goal was overturned due to Arriola being offside. It wasn’t a difficult call to make.

HEAVY METAL ROCK MY HEART: Have to take some time to appreciate the massive efforts of defender Tim Parker in this game. While the high press causes reporters to feature attacking midfielders and strikers, the back line is crucial is starting off plays and keeping the ball out of the net when the counterattack is on. While goalkeeper and captain Luis Robles was credited with two saves on the night, he would have had to make at least four more if not for Parker’s efforts in the box.

SOME TURN TO DUST OR TO GOLD: This is the most I’ve gotten to see Everton and England legend Wayne Rooney this season. And he still, more or less, has the sharpness and power that DC was hoping for from him. I can’t help but think he’d be more effective as a starter to give him a chance to really get into the game. Hopefully, he can do some great things to salvage DCU’s season.

WE ALL POISONED YOU: The second half was slightly ruined for me as an at-home TV watcher. The ‘gremlins,’ as MSG’s Steve Cangialosi called them, kept messing with the video feed. I was slightly thankful that there weren’t any more goals that I could have missed. But when the final whistle blew, the Red Bulls moved into second place, and still have two games in hand on Atlanta United.

They return home to face former teammate Mike Grella and the Columbus Crew for their second matchup of the season.