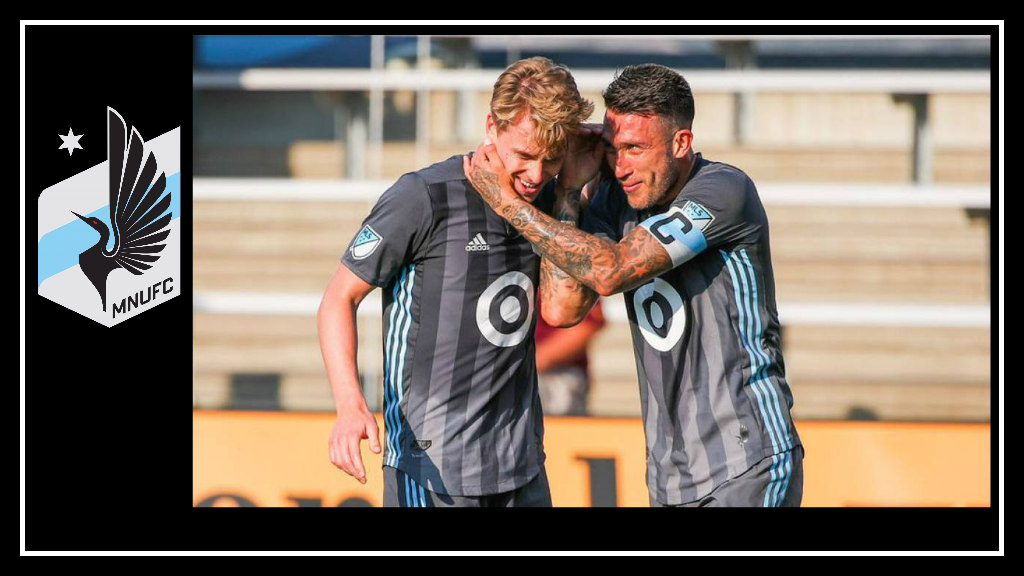 While Minnesota United kept a self-same 3-5-2 for the third straight match in nine days, LAFC flew in fresh legs after a heavy week of US Open Cup and MLS competition. Some LAFC fans may have guffawed at the matchup which placed the new club of Diego Rossi and Carlos Vela, against a side built from NASL holdovers and a single DP (their newly minted second still waiting on paperwork and an international slot).

They may also have laughed at the final score and Minnesota’s celebrations, comforted by the knowledge that it could have been much different if LAFC’s full complement of starters had been available to play. For Minnesota fans, however, Saturday’s game and the midweek matchup with New England Revolution were reminders of how much fun it can be to watch United when all the pieces come together, when the players themselves can enjoy the game.

I watched Wednesday’s match against New England from a new perspective, standing alongside a team of U10 players, parents and coaches in town for the USA Cup, a youth tournament held at the National Sports Center in Blaine, on the same campus as MNUFC’s training facilities and their former home stadium.

For most of the group from Idaho Juniors FC, that match was their first professional soccer experience. With all the cynicism and bitterness recently surrounding the club, it was refreshing to experience the game through their eyes. Their excitement was a reminder that these shared experiences – the highs and the lows, every moment we share around this team, this game, right in our backyard – should not be taken for granted.

So proud of these boys! The Juniors lost their quarterfinal match tonight, but played hard to the end and fought for one another to the final whistle.
Enjoy the rest of your weekend boys. You earned it all!#RedCardtoRacism pic.twitter.com/yULmtAJv6c

Maybe I would feel differently if I had not had the opportunity to sing Wonderwall with the parents and coaches that night, if some Loons hadn’t taken a break from their celebrations to spend some time with the kids on the field. Maybe. But I would like to think that if the score had been reversed, if it had ended with a 2-1 loss instead of a 2-1 win, I would still feel incredibly lucky to have shared an experience with this club with my new friends from Boise and that I could still revel in the memories with them the next morning while standing on a muddy field in Blaine.

Thankfully, I will never know because Minnesota won, 2-1, on goals from Christian Ramirez and Darwin Quintero. A much too easily given penalty to the Revs in the 52nd minute was the only damper on a night which saw Minneapolis-based Surly Brewing forced to honor for the first time this year, the “Surly Bird Special,” a free beer awarded to any fan with a ticket stub when a Loon scores in the opening ten minutes of a home game.

Ramirez scored in the fifth minute, his fifth on the season. Quintero added one just before the halftime whistle. Adrian Heath was actually happy after this win because of a number of standout performances by his defense, most notably centerback Brent Kallman.

With that win setting the tone for the conclusion of the homestand, a tired United faced a depleted LAFC. As always, there was concern that goals would come early and often. Indeed, six goals were scored in 60 minutes of play, four of those coming in the first half.

Surprisingly, five of the six goals scored were earned by Loons. An even bigger surprise was that Minnesota successfully defended 15 LA cornerkicks (LA’s lone goal by Benny Feilhaber came from a sequence following a corner in the 26th minute). Perhaps the biggest surprise yet was who opened the scoring: midfielder Rasmus Schuller knocked in a beauty in the 25th minute, with an even prettier assist from Quintero. It was the Finn’s first MLS goal.

AND QUINTERO!!! (Sorry, I was too busy editing Batman to catch The Scientist)

Just before the half came a shot from Ramirez, assisted only by a goalkeeper error. 2-1 Minnesota in the 45th minute. Less than sixty seconds later, Quintero added another, assisted by defender Eric Miller, to go 3-1 into the half. Would they fall apart after halftime, with LA coming out of the locker room hot (yet another humid night) and bothered (coach Bradley was irked by the boos his son received when Toronto FC was in town) and hungry to even the score?

No. The Loons ripped open their shirts and unfurled their capes. Miguel “Batman” Ibarra notched the fourth goal of the night in the 56th minute, assisted by best buddy Christian “Superman” Ramirez. Less than two minutes later, the Dark Knight returned the favor, assisting a Superman brace. 5-1 Minnesota. The following thirty minutes saw a flurry of subs (including Ramirez coming off for Romario Ibarra to make his debut), but the tired, tested Loons came out on top against the fresh legs of LAFC.

The press conference and locker room were both much more festive Saturday night than they were for the 3-2 win over Real Salt Lake the previous weekend (the night Heath raged furiously at his players while opposing coach Mike Petke made his now-infamous VAR speech). Heath was happy, the players were happy. And it would seem that happiness made all the difference.

“It’s amazing! Everybody’s happy in the locker room,” Ibarra said of the streak. “We’re all enjoying playing. You can just see it out there on the field. We scored, we conceded and we just didn’t put our heads down. We kept going and we kept playing our game. The second half, we came out hungry.”

Ramirez reflected, “I think [the club] is getting a winning mentality, that every game we need to go out and win wherever we play. In these three games at home, we’ve shown that we want to be playing to fight for the finals.”

If you didn't know…

But now the Loons go on the road, where they will play for the better part of the next month. Heath holds no misconceptions about the promise of replicating the win streak, saying, “Let’s win one first on the road before we get to three.”

Defender Francisco Calvo had an interesting perspective on the first away match, this Saturday in Vancouver: “I don’t think we have to change anything. Anything. Because, if we play — I mean, I never play in Vancouver, but I think that the field is the same, or more awful than this one, you know. So, I mean, we have to feel like we’re playing at home. Try to do the same thing.”

Have you ever stepped onto astroturf and said, “Ah! Feels like home!”? Neither have I, but the Loons have always had a gritty attitude perfectly suited to such reflection so maybe…