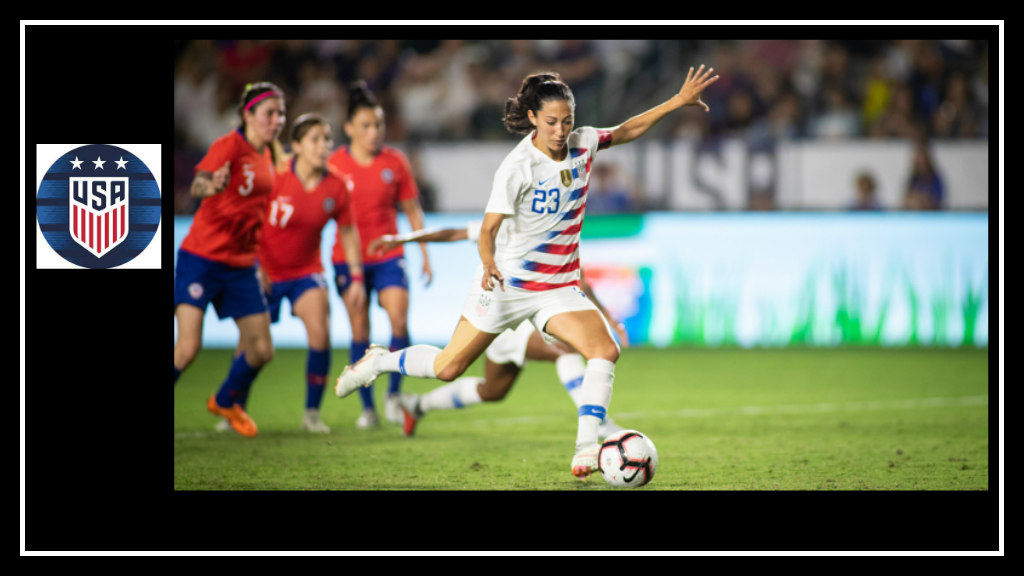 On August 31st the US Women’s National Team defeated Chile 3-0 at the StubHub Center in Los Angeles, California. The highlight of the night was the celebration for Christen Press reaching 100 caps for the national team. Over her 6-year international career, Press has scored 45 goals in 104 caps, including a goal to seal the 3-0 lead on her celebratory night. She also has won an Olympic Gold Medal and a World Cup Championship.

Reaching 100 caps for a national team is a tremendous achievement. Congratulations @ChristenPress! I was honored to present you with this gift to commemorate your incredible milestone! Best of luck to you and the entire @ussoccer_wnt in tonight’s match. #OneNationOneTeam pic.twitter.com/juafwrTR4Z

In this first game against Chile on the March to World Cup Qualifying, the USWNT cruised past Chile 3-0. In addition to an own goal (off a Julie Ertz header) and Christen Press’s tap-in at the far post,  19-year-old Tierna Davidson scored her first USWNT goal from a header off of a goal kick.

There was controversy surrounding a PK that Christen Press took and scored- as it was disallowed because a Chile player and Crystal Dunn both encroached on the penalty kick – since both of them encroached fans and players argued that it should have been retaken.

Earlier in the day, the WCQ groups for CONCACAF were decided. The USWNT will play Mexico on October 4th, Panama on October 7th, and Trinidad and Tobago on October 10th all in Cary, North Carolina.

The groups are set for the 2018 Concacaf Women's Championship! #CWC pic.twitter.com/MXhagpcce9

Alex Morgan captained the game, earlier it was reported that Carli Lloyd will retire following the 2019 WWC in France next summer, many supporters anticipate that Alex Morgan will be passed the torch. When Carli Lloyd came into the game, she was given the captain’s armband.

An early injury for McCall Zebroni after an unfortunate landing led to a 5th-minute sub, Morgan Brian subbed in for McCall Zebroni. Later it was reported that she has a fractured elbow. North Carolina Courage may lose their strong No. 6 for the 2018 NWSL playoffs starting in the coming weeks.

In the 33rd minute Mallory Pugh went down in the box, Alex Morgan stepped up and after missing the left-footed attempt, Tobin Heath rebounded and dished in a cross and Mallory Pugh scored her 12th international goal.

It didn’t take long for the USA to double their lead. In the 38th minute the USWNT earned a free kick in a dangerous position, Tierna Davidson gets the flick on header and Tobin Heath slots it away.

Just after halftime, in the 47th minute, Carli Lloyd scores a header off of a Tobin Heath free kick in her first touch of the game.

Shortly after, Alex Morgan would get her goal off of a Tobin Heath cross, however, it was ruled offside.

In the 90+3rd minute, Carli Lloyd sprinted up the wing, dribbled around Chilean defenders and slotted it away.

There is a lot I could say about this, but instead I'll just say that Carli Lloyd gets the 4th goal of the match

The next US Soccer game is tomorrow. The USMNT take on Brazil with a young squad looking to secure their places within the depth chart.