The Future of Minnesota Soccer 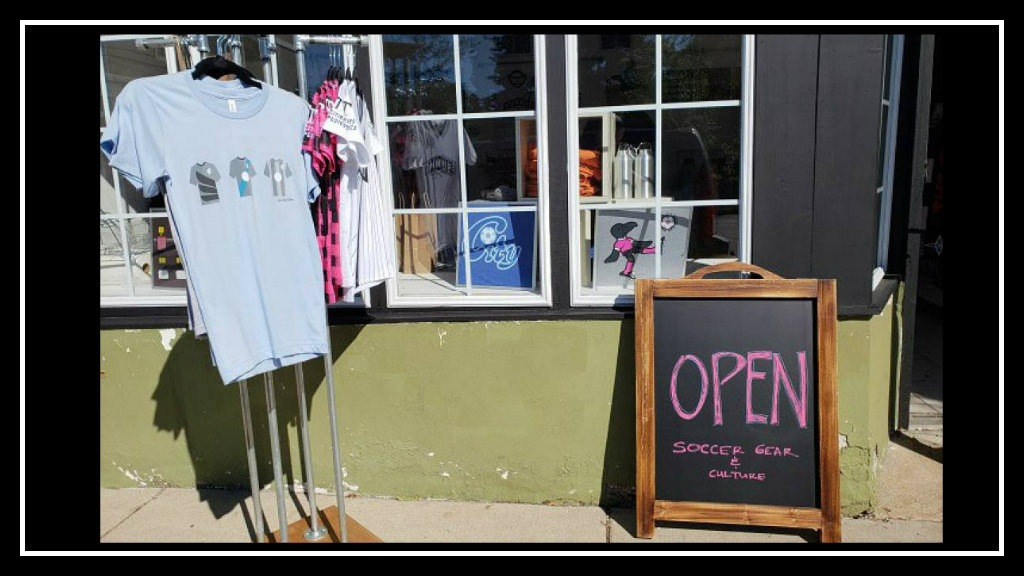 On Tuesday, August 21, just 30 minutes after Minnesota United FC sent out a press release announcing the addition of Fernando Bob, another message appeared in my soccer-heavy inbox.

The subject line: ‘ANNOUNCING a huge step forward for the club’

It was sent out to members of Minneapolis City SC, a Minnesota club which competes in the National Premier Soccer League, but the announcement had nothing to do with flashy player signings (City’s roster is built entirely of Minnesota natives, most of whom play while home on break from the NCAA) or a new stadium or menswear sponsorship. No, it was more tangible than all that.

Minneapolis City SC was opening a storefront, The Club Shop, a retail space to be shared with their kit designer, Stimulus Athletic (founded by former MNUFC striker Geison Moura), and a gathering space for club staff, players and members.

The build-out continues and it’s as DIY and awesome as you would expect. #MplsCity pic.twitter.com/G1uQKf7VFu

To be honest, this email was a tad more exciting for some of us in the Minnesota soccer scene than Bob’s signing. This lower league club, in only its third season (second in NPSL), has a large following, in part because of its winning ways (the Crows were undefeated through the 2018 regular season) and because of its member-driven business model (members vote for everything from board members to kit design). Basically, a refreshing antithesis to MLS club currently playing just across the Mississippi River.

So how did the idea of a retail space come about?

“The idea was brought up in a pipe-dream sort of way with no real expectation of it ever happening,” said business director Sarah Schreier. “And then, you know how sometimes you might look at available homes or apartments without the intention of ever moving, but then you find this amazing space?  It was like that. It happened very quickly and almost impulsively — but we had to pull the trigger on it or we’d lose it.  We thought we’d give it a go and see what came of it.”

The Club Shop opened on Saturday, September 22 with a day-long event, starting with a Premier League watch party (Liverpool was heavily favored by the standing room only crowd) and appearances by Minnesota soccer legends. Yes, Minnesota has soccer legends. This is the part where I remind you all that despite its sophomore status in Major League Soccer, this fair state had a foot in the soccer door long before this league existed.

Minnesota first hosted a soccer team in 1976, when the Denver Dynamo moved to the Twin Cities and became the Minnesota Kicks. The Kicks competed in the National American Soccer League (the first version) and played in Met Stadium in Bloomington, a space they shared with the Minnesota Twins baseball team.

The first Kicks home game, on Mother’s Day in 1976, had to be delayed multiple times while staff attempted to usher in a crowd significantly larger than the 8,000 expected. After every gate was thrown open, at least 20,000 people watched the Kicks earn their first win of the season.

“We were fortunate that when we came into the state in ‘76 there was no soccer here at all […] so we had to build something from scratch and we only had a short period of time to do it,” explained defenseman Alan Merrick. “So I think that the players that you described – Alan Willey, Steve Litt, myself, Jeff Barnett – we were pioneers of the game here and we built a culture very very quickly and the culture was to win. And it was that simple. We were forthright in everything that we did; we were honest, we were a lot full of endeavor. And we realized that we were, you know, right from square one, going to make things happen.”

He played against the likes of Pele, Beckenbauer, Cruyff, Best…and he shut them all down because he was the boss.

He’ll be there from 9-10am. pic.twitter.com/NCBObblVjN

Even after the Kicks folded in 1981, the enthusiasm remained. Unfortunately, Minnesota soccer repeatedly fell victim to the financial woes which continue to pepper the American soccer landscape today. After the Kicks came the Strikers (Major Indoor Soccer League, 1984-88), then the Thunder (United Soccer League, 1995-09), the NSC Minnesota Stars (owned by the National Sports Center Foundation and playing in Division 2, 2010) and the Minnesota Stars (under NASL ownership, 2011).

The latest era began when Dr. Bill McGuire purchased the Stars and rebranded the club as Minnesota United FC in time for the 2012 NASL season.

Continued success is dependant on people fostering a love of the game at every level and tapping into the roots that shape Minnesota soccer today.

With the success of the women’s program at the U of M, the Minnesota Thunder Academy which sends many players to Division I schools, and the impressive results of Minneapolis City SC (from which some players have leaped to the pros, like Brandon Bye of the New England Revolution) the next generation of Minnesota legends are carrying the torch.

“We know that Minnesota players are being produced and produced in good numbers. So I mean it’s indicative now, seeing a store like this, in Minneapolis. It’s a storefront that’s going to have people…” Merrick paused, then pointed to a chalkboard displayed on the sidewalk at The Club Shop’s front door. “Look on the board there: ‘Soccer’ AND ‘culture.’ We have a great soccer culture.”

“We [Minneapolis City] are, in our own way, a throwback to the way things used to be,” Schreier said. “At the same time, we’re building on that and growing the landscape and culture the best we know how.  The soccer landscape is full of ups and downs — now we’re on an up and we want to celebrate that without forgetting an incredible, community-oriented past.”

This intermingling of fans, players and staff was a common sight when United played in Blaine and it was a key attraction for many fans. While the move to MLS has detracted from that cultural experience with United, Minneapolis City is enriching it. And these two very different clubs are both important to the future of soccer in Minnesota.

“It makes for a richer community,” explained Schreier. “We use the coffee analogy a lot:  it’s good to have Starbucks and the local offbeat place if you want a thriving soccer scene and both learn from and play off of each other to get better.  We think we can have that complementary relationship with MLS which makes soccer in Minnesota richer, more varied, and more interesting for having us both here,” Schreier explained.

And if The Club Shop’s grand opening is any indication, soccer culture is here to stay.