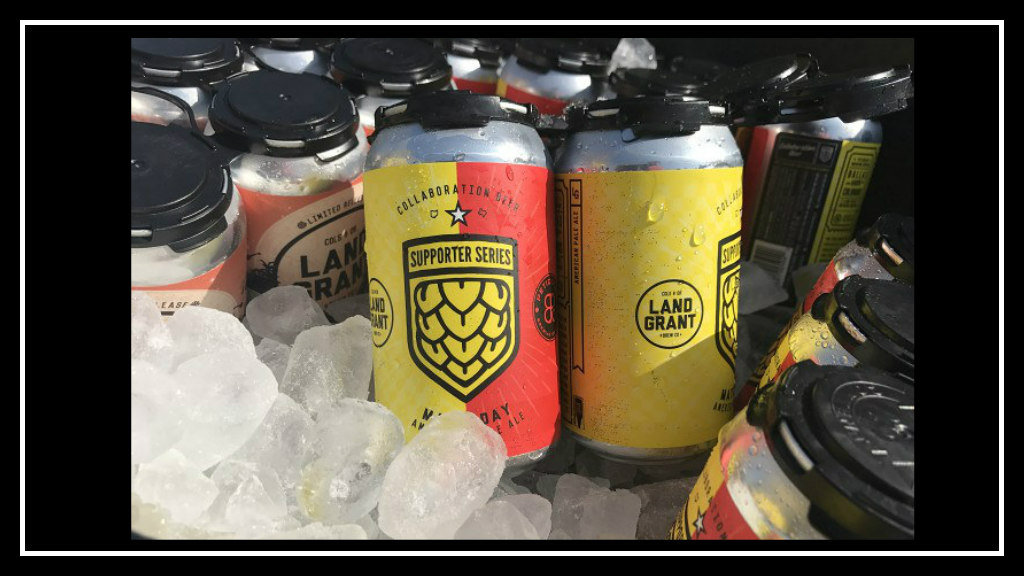 When I started writing this piece, the Columbus Crew were heading to FC Dallas for their only away game in Texas since the news that they may be moved to Austin. Tensions were high between supporters of the Crew, Austin FC, and the Dallas fans who were being stuck in between it all. Nobody knew what potentially could happen that day as fans from all three sides descended upon Toyota Stadium in Frisco, TX.

The entire day gave me the inspiration to write about a unique beer that was brewed between Peticolas Brewing Co. in Dallas, TX and Land Grant Brewing Co. in Columbus, OH.

As the President of the Dallas Beer Guardians, two of my favorite things are soccer and craft beer. The passion that comes with both is often noted as two things that go hand in hand. I couldn’t agree more.

I decided to reach out to both breweries for more on the beer to share with our readers. I hope you enjoy this celebratory piece on craft beer, passion of soccer, and the saving of the Crew.

Craft beer and soccer: These certainly are two things that most people are not surprised to hear together. For some reason, they seem pretty “peanut butter and jelly” if you really think about it.

Across the United States, you see teams and supporter groups embracing local beers that exude the same passion in brewing as they have for their team on the pitch. There is no better example than the collaboration series that Land Grant in Columbus, OH started.

I reached out to brewers and employees of both Land Grant Brewing Co. and Peticolas Brewing Co. for the story. The beer, Match Day, is the focus of this article and I hope that you will find time to make it to Columbus or Dallas to get your hands on this amazing American Pale Ale.

Land Grant opened right after the rebrand of the Crew and felt that they wanted to connect with the community of Columbus more. According to brewers Justin and Adam, one of Adam’s roommates was working for the Crew and they were looking to expand their work with local vendors in the stadium.

“They had mentioned they wanted to do a Crew beer... which everything we had ever seen along those lines is that a brewery takes a beer they were brewing and do a fan vote for the name. We felt that was dishonest and wanted to brew a beer that supporters could be part of its creation.”

After brewing 2 black beers and 2 gold, they came up with Glory American Wheat which became the official beer of the supporters in Columbus. In their 3rd season of partnership with supporters, Land Grant looked at collaborations with breweries in the cities of the 9 original MLS teams who partnered with teams or supporter groups.

Peticolas Brewing, Co. of Dallas, TX became one of the target breweries alongside Boulevard out of Kansas City, MO.

The story for Peticolas and their connections to FC Dallas and their supporters isn’t as harmonious. Peticolas Brewing, Co. owner Michael Peticolas and head brewer, Chris Martinez have been lifelong soccer fans and soccer has been at the core of the brewery culture since they started in 2012.

With the grassroots feel and refusal to sell out to large corporations and distributors, Peticolas couldn’t get their beer into Toyota Stadium in Dallas. Originally brewed for FC Dallas, their beer Irish Goodbye was rebranded when it was declined by the organization due to their lack of distribution and the front office ties to Budweiser and Legends Hospitality.

The beer, Match Day, is a 5.5% ABV American Pale Ale that shows a true collaboration through and through. Land Grant took care of the malt bill and yeast while Peticolas took responsibility of the hops profile. What you find, is a crisp and citrusy pale ale that works perfectly on any game day. While both breweries brew their own batches, you won’t find many differences outside of the water used and that Land Grant cans and Peticolas does not.

So, where can you get your hands on this beer? Land Grant’s partnership with the Columbus Crew is beautiful in that they were able to convert a storage container and serve their product in stadium. Peticolas, on the other hand, not so lucky for the in-stadium sales. However, you can find Match Day on tap at many of the Dallas Beer Guardian tailgates and in the taproom.

It’s beyond just what’s in the beer, though. There is a true feeling of connection between soccer supporters with this collaboration. Match Day dropped a year before the news of the potential move of the Columbus Crew to Austin. The connection between the beer became much more personal with the ties to the teams and the supporters.

“Soccer is tribal,” says Grayson Hall, head of distribution and sales for Peticolas Brewing. “It’s not tribal because it’s cool… it’s because that’s how things grow. Soccer fans aren’t the same as football and baseball fans. They want to feel a connection that doesn’t exist in your run of the mill professional sport.”

That connection is not just with the supporters, but this collaboration became personal with the #SaveTheCrew movement. This became a family who was being affected in a real way.

This rings true through craft beer and in soccer culture in America. Just as with the passion and support that comes with local breweries being supported by their communities, soccer supporters banded together to support the Crew staying in Columbus.

Over the past year, American sports fans saw one of the most unique movements that showed the support that can come from a community for a cause. Fueled by the supporters in Columbus, the #SaveTheCrew movement was established to not only bring awareness to the situation in Columbus and put social pressure on Precourt Sports Ventures to leave one of the foundational teams in Major League Soccer in their home city, but to show that soccer culture cannot and will not be bought out.

This parallels the craft beer scene in that people want to ask about what’s truly local and want to support the community that they come from. Hall says, “Once that money comes in and the big company comes in and wants to move and change what was an established part of the community, people don’t want to be a part of that anymore.”

This is not only seen when visiting your local breweries around the United States, but this was seen with the idea of the Crew moving to Austin. Almost instantaneously, supporters across the United States stood up to say, “Big money will not beat passion.”

In speaking with members of both Land Grant and Peticolas, there is a real sense that this community that came together in the beer scene was also seen in coming together the entire past year for this movement. Adam Benner said, “it showed the communal aspect of soccer can bring separate fans together separated by hundreds of miles but connected on the same thing with soccer.”

This is what makes this beer, Match Day, so special. What started as a collaborative brew between MLS original communities became a show of strength and unity against large corporations and the greed that fueled decisions.

I received information from Adam and Justin on Friday, October 12 for this story which became a more special day. We were exchanging text messages throughout the day and it almost seemed fitting of the potential news that was to come later that day. “As of 1:47pm EDT there has been no official announcement, but if all the rumors are true our friends at Save the Crew accomplished their goal, and we are honored to be a part of it.” said Benner.

We are all honored to be a part of this; not just the collaboration and what it stands for, but for the support given day in and out to the community of Columbus, OH in saving the Columbus Crew.

Want to visit Land Grant and Peticolas? Check out their info below: