The Crew: Pushing through the Playoffs 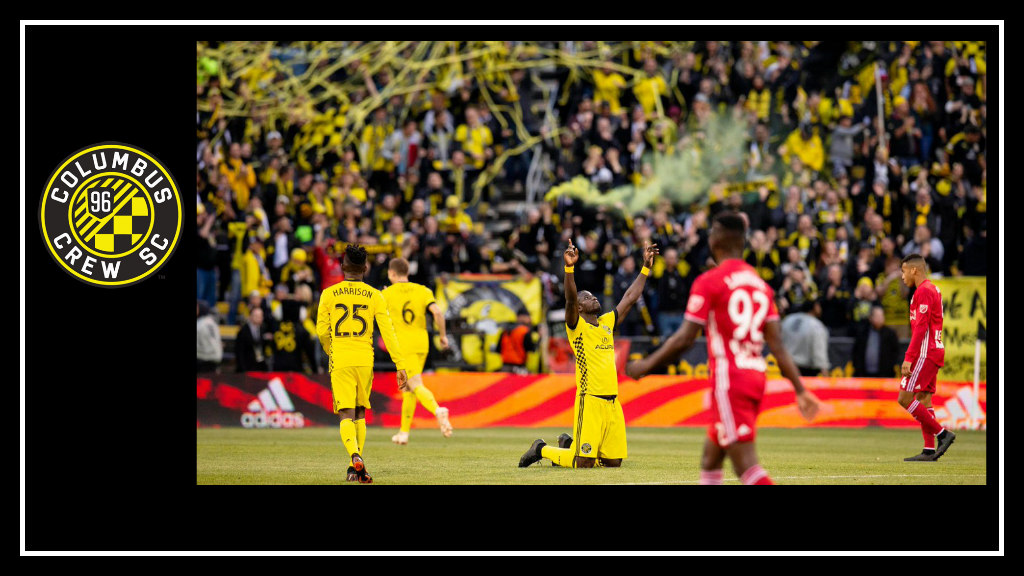 Columbus Crew SC started their playoffs on a Thursday just four days after their final game of the regular season.  Due to a lackluster end to the season, Crew SC played the team currently ending their season on a hot streak and one of the Crew’s original rivals, DC United, in a knockout game away from home.

After 90’, the game was tied 1-1 on a DC goal from Brillant in the 21’ and a goal from Federico Higuain in the 30’.  In extra time, Higuain, typically a master with the ball at his feet, headed home a goal in the 96’.  Then, DC’s Nick DeLeon scored the tying goal off a poor clearance from the Crew in the 116’.  The game’s extra time ended in a 2-2 tie and proceeded to penalty kicks.

Zack Steffen repeated his masterful performance during PKs last year in Atlanta, by blocking both Wayne Rooney’s and Luciano Acosta’s shots.  Gyasi Zardes’s shot was blocked by the DC keeper, and Patrick Mullins knocked his off the post.  The PKs ended, not by a Crew player shushing the crowd as Adam Jahn did last year in Atlanta, but as DeLeon, the hero of the extra time shot his PK over the net.

Thoughts on this Game:

Pipa, who is fantastic much of the time anyway, has turned it up a notch in the playoffs scoring 3 goals (one a PK) in this match.  He definitely is showing his hunger for an MLS Cup.

DC was a tough opponent, but we gifted them the two goals.  The first when Steffen allowed a cross to go through his fingertips and drop to Brillant and a poor clearance by Crew led to DC’s second goal.  We need to minimize these errors to keep moving forward in the playoffs.

My heart can’t handle these overtime, go to PKs, knockout away games against strong teams.  However, the Crew continues to win them. However, during this game what shocked me the most was when Gregg Berhalter was stopping a ball that had gone out of bounds and Acosta shoved and then tripped him.  Now, I’ve seen Berhalter do this in many games, but I’ve never seen a player respond in that way.  I don’t know if it resulted in any discipline for Acosta, but it should have.

Gregg Berhalter showed why he is being considered for the USMNT coaching position after the Crew’s 1-0 result against the Supporter’s Shield winners the New York Red Bulls.

Again, the Crew were playing on shorter rest than their opponents—playing only 3 days after their lengthy game against DC.  Berhalter shifted his line-up from the DC game into a free-flowing 4-4-2.  Pipa started the game on the bench.  Patrick Mullins and Gyasi Zardes started up top, and rookie Luis Argudo started out right.

While there were a few chances for both teams, the more memorable one in the first half was by the New York Red Bulls in the 27’.  The ball was headed off a corner, bounced off the post toward the goal line, went off the head of a diving Zack Steffen, and then traveled out of the goal area.  Despite the close chance for New York, the first half ended, 0-0.

In the second half, Pipa came off the bench, and the tempo of the game for Crew SC changed.  In the 59’, New York’s Daniel Royer had a breakaway that ended as Steffen ran 35 feet up the field to tackle Royer.   Then the Crew scored their goal in the 61’, and it was a thing of beauty.  Milton Valenzuela sent a ball across to Higuain who flicked the ball across to Zardes who finished off the shot.

Both keepers made important saves in the waning minutes of the game.  Luis Robles saved a hard shot from distance from Pedro Santos in the 89’, and Steffen made a fingertip save of a Bradley Wright-Phillips header in the 93’.  This final save sealed the 1-0 win for the Crew.

Thoughts on this Game:

In the playoff games played thus far, the Crew have shown why they should not be underestimated.  While they did not go into the playoffs on a winning streak as in years past, they have apparently found their playoff mojo.  They did a nice job minimizing the Red Bulls scoring threats.  If our defense can keep up the defense they showed in this game, the Crew can go deep into the playoffs.

Today, it was announced that Zack Steffen was MLS Goalkeeper of the Year.  While some other fans don’t seem happy with the result, I think he has definitely earned the accolades this year.  I’m not saying the other keepers didn’t deserve it—being a professional goalkeeper takes skills—I am proudly a fan of Steffen.

Finally, it is clear that Gregg Berhalter’s meticulous strategizing brings positive results.  Let’s see those results continue this Sunday when the Crew take on the Red Bulls in the second leg of the Conference Semi-Finals.