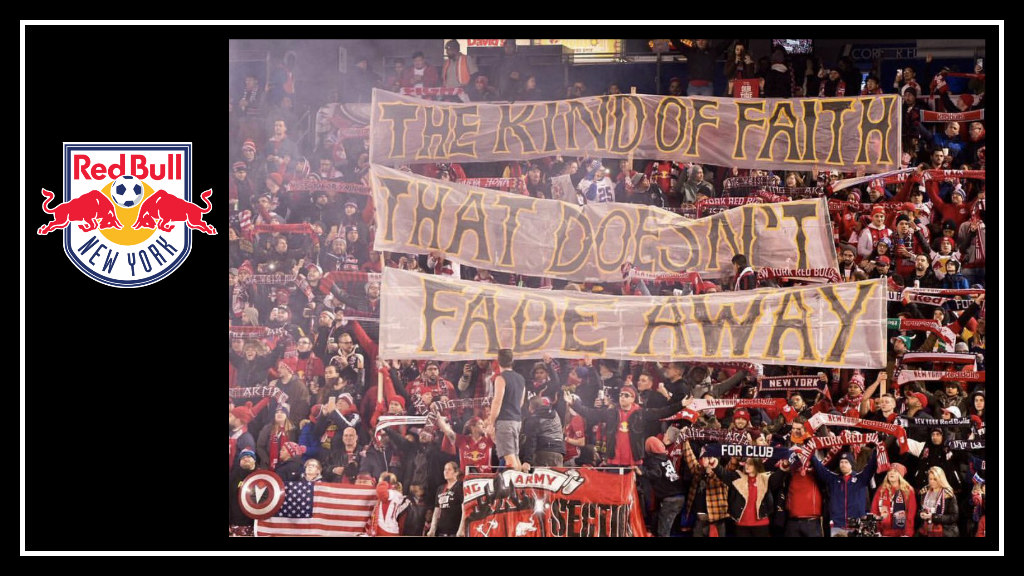 I’m coming to you from the comfort of my couch once again with an overview of the Eastern Conference competition. Usually, I integrate songs or movies into my articles, but this calls for a more onomatopoeic approach.

The New York Red Bulls had secured a first-round bye even before winning the Supporter’s Shield on Decision Day. The knockout round was between the Columbus Crew and DC United. While a classic Atlantic Cup matchup would have been amazing, it was the Crew who emerged victorious following 120 minutes and a PK shootout.

Leg 1, at MAPFRE Stadium, ended with Columbus ahead by one goal. RBNY fans were bracing themselves for disappointment. Was the team going to crash out in the playoffs after the euphoric Shield win?

The Empire struck back. A deflection from Alex Muyl (17′) and a brace from Daniel Royer (73′, 76′) put the Red Bulls through to the Conference Finals (3-1 aggregate). Flames shot out from pillars on the goals with every score, and the crowd was equally fired up.

There was an International break that took Aaron Long and Tyler Adams to Europe for friendlies with the US Men’s National team. Kemar Lawrence, Kaku, and Derrick Etienne, Jr. were called to International duty as well. So there was a break in playoff action.

Not really worth complaining about, although I’m sure plenty of people did. The final had been settled before the break anyway. Atlanta United made quick work of NYCFC for their semifinal round. But they had never defeated RBNY before. And while the Red Bulls never took that record for granted, no one was prepared for what actually happened.

First, RBNY announced Lawrence was injured and put homegrown defender Connor Lade in his spot in the lineup. Then the defense was outrun by Josef Martinez, Miguel Almiron, and Tito Villalba. But the first and the second sentences are unrelated. If anything, Lade slotted back into the defense wonderfully. It was… hard to explain, really.

To say that they didn’t look like themselves is a sort of cop-out, a cliche that gets trotted out for any loss. But this is the only way to explain it. The Red Bulls push up the field, and the ball spent way too much time near their goal to say they were doing what they do.

Did they keep Atlanta from getting particularly fancy? Sure. But ugly soccer can win, too. And that’s what happened. With a three-goal deficit, RBNY had a lot of work to do in this Eastern Conference Final.

The Red Bulls scored four or more goals in thirteen matches in all competitions this year. They were able to hold opponents scoreless at home three months solid. So while it was not impossible for the team to pull off something downright magical, the fear crept in.

The game itself was good. There was movement. There was pressing. There was also cursing and shoving and yellow cards and a last-ditch goal at the death from Tim Parker that hasn’t gotten half the credit it deserves. Had they been able to hold Atlanta scoreless in that first leg, fans would still be partying and Parker would probably never have to pay for another beer in the NY Metro area ever again.

But instead, Atlanta will be hosting the Portland Timbers for the MLS Cup Final. I’ve watched it the past couple of years, even as I’ve seen RBNY crash out. But this year…? I don’t think I can do it. I’ve never thought the Red Bulls deserved to be there more than they did this year. For them to not be hosting is devastating.

Exit interviews are scheduled for Monday, December 3rd. The team was required to submit roster on Friday, November 30th.  But the first major announcement has already been released:

I’ve met and spoken to Adams once or twice. He is exactly who he seems to be, and the Red Bulls organization has helped to shape that. Not only that, but his career with the USMNT is a bright spot that should mean great things in Qatar and North America for the upcoming World Cup cycles. I look forward to seeing him with RB Leipzig.

As for the rest of the team? I’m not going to make predictions (never been that good at them, anyway). But I do know that I’ll be back to talk about it all next season. I hope you’ll be there to read it.