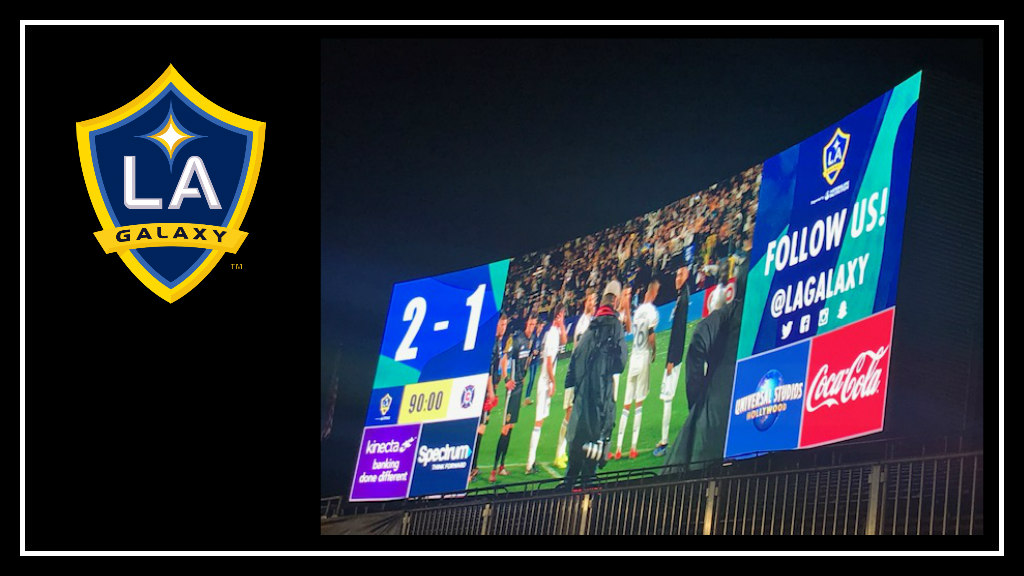 Seven-year-old singing sensation Malea Emma returned to give her inspiring rendition of the national anthem, which definitely got the stadium pumped.

Saturday night was head coach Guillermo Barros Schelotto’s debut  for the LA Galaxy and the MLS. Other debuts included Diego Polenta, Uriel Antuna and Emil Cuello. They were key to getting the ball moving forward.

The first half showed much-improved squads for both teams. The Galaxy made good crosses and passes, but most were intercepted by the Chicago Fire. Anyone who could score was being serviced, not just Zlatan Ibrahimovic, which was a strong change for the Galaxy’s strategy.

Emmanuel Boateng had to be subbed in early for Romain Alessandrini, who pulled up with what appeared to be a hamstring strain.

Bingham’s performance all night showed he’s in top form. The only time he was scored on was when he was left hanging against CJ Sapong, who took advantage of a wide open net to put Chicago up 1-0 in stoppage time.

Four minutes into the second half, the Galaxy found themselves down and fans feeling the ghost of seasons past haunting them. Still, fans roared on, encouraging the players as they made their runs and created chances.

The much needed offensive spark came from 16-year-old Efrain Alvarez. By subbing on for Emil Cuello, he became the youngest player to play an MLS match for the LA Galaxy. Eight minutes later, Daniel Steres was able to score a header on a cross from the teen’s left foot.

Chris Pontius was also a game-changer. Alvarez flicked the ball to the midfielder whose shot hit off the crossbar, but Zlatan Ibrahimovic was there for the rebound and scored what would be the winning goal in the 80th minute. The final score of the eventful night was 2-1. The Galaxy pulled off a victory that brought back the feeling that their home could be a fortress yet again.

Angel City Brigade, Galaxians, and Riot Squad supporters groups could be heard across the stadium. I was sitting in GA near the away supporters and G’s fans began playfully taunting, standing up and getting loud. All around, the winning atmosphere was amped by fans.

LAG are already looking to be in better shape despite a few poor deliveries and literal slip-ups.  Quite a few injuries (Perry Kitchen-ankle, Juninho-knee, Sebastion Lletget-hamstring) and the departures of Giovani Dos Santos and Ola Kamara changed the line-up, which meant the G’s had to adjust. Still, this allowed for Alvarez, Polenta, Cuello, and Antuna to get their chances. The players connected slowly, but surely. Ibrahimovic’s leadership as captain really showed through, especially for Alvarez.

In their next match, the Galaxy will travel to Texas to face FC Dallas on Saturday, March 9.