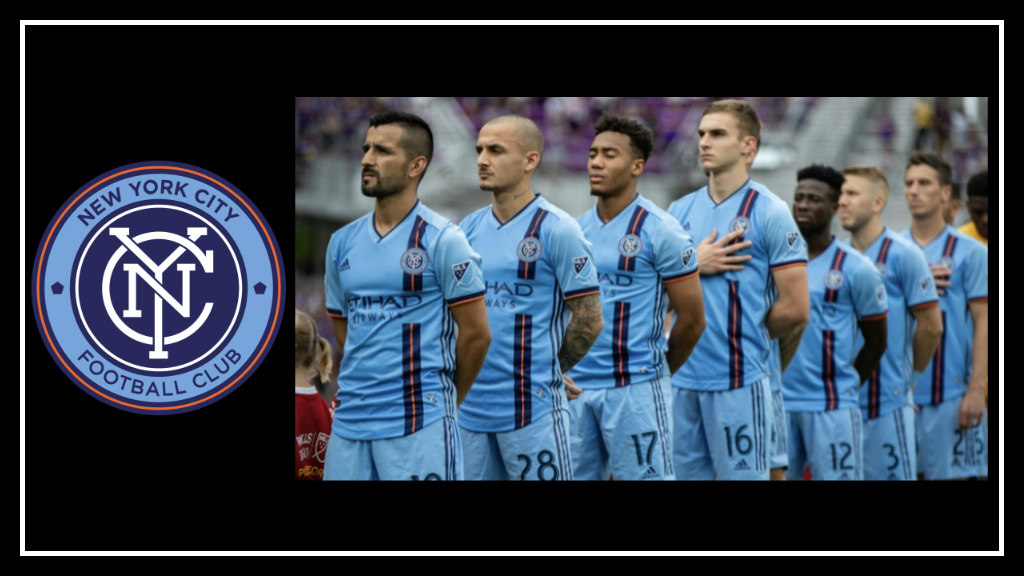 Saturday, New York City Football Club kicked off its 2019 season facing off in Orlando against Orlando City Soccer Club.   Since NYCFC has no true striker on its roster, fans were wondering what kind of lineup and strategy would be employed.

The back line was as expected with Anton Tinnerholm, Maxime Chanot and Alexander Callens with Ben Sweat filling out the four-man back line on the left side instead of an injured Ronald Matarrita.  In midfield were Ring, Sands, Ofori. Fan favorite Lewis with Maxi Moralez, and new Designated Player Alexandru Mitrita (“Mitri”) served as forwards.

It didn’t look like a true 4-4-2 however.  In expected Coach Dome Torrent fashion, the formation seemed less than standard and more like a 4-1-3-1-1 much of the time. 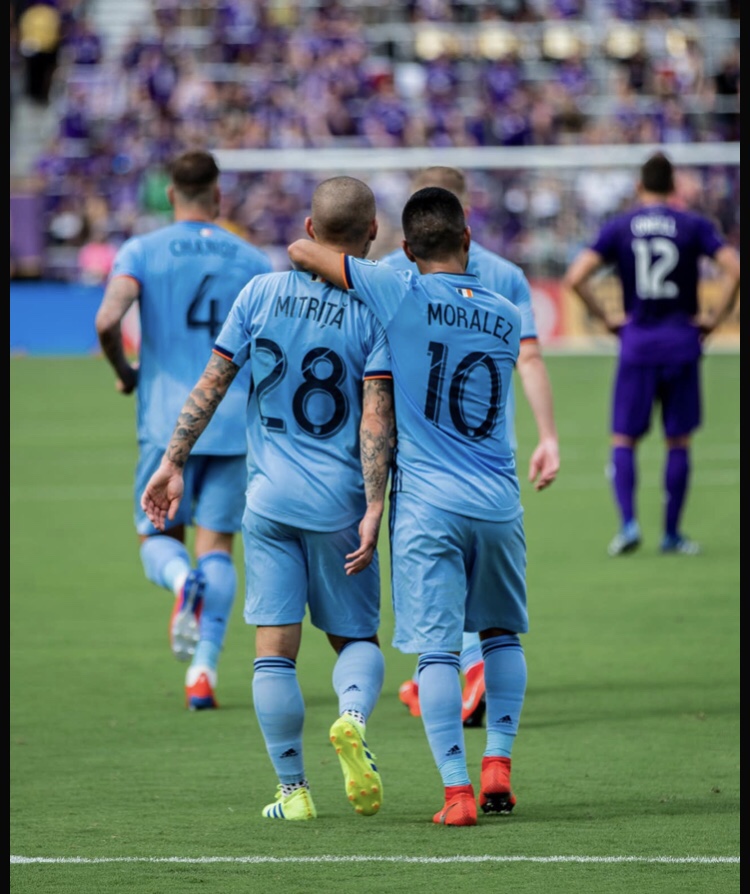 Orlando City jumped into the game with speed and aggression taking charge of most of the possession and offense for a good portion of the first half.  NYCFC seemed much more defensive and less eager than in past seasons, to maintain possession.

The most dangerous player on the field for most of the game was OCSC’s Christopher Mueller, who along with Johnson dominated both offensively and defensively.  GK Sean Johnson made one impressive save but strangely it appeared that Sacha Klejsten, who historically gave NYCFC trouble, seemed a bit rusty and wasn’t taking shots.  It could also be that the back line was adequately prepared for his predicted style of play and took away his chances.

In a moment of “Wait, what just happened?” Midfielder Ebenezer Ofori, at the 13th minute, took NYCFC’s first shot on goal in the 2019 season and put it into the back of the net.  At the 45th minute, the lead was solidified by a banger by Alex Ring assisted by Mitri.  Despite the relative lack of possession in the first half, New York City closed out the 45 with a 2-0 lead. 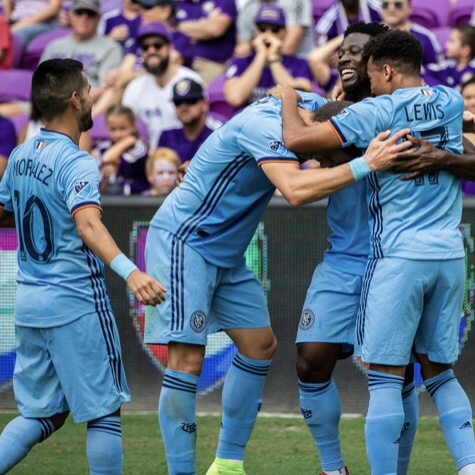 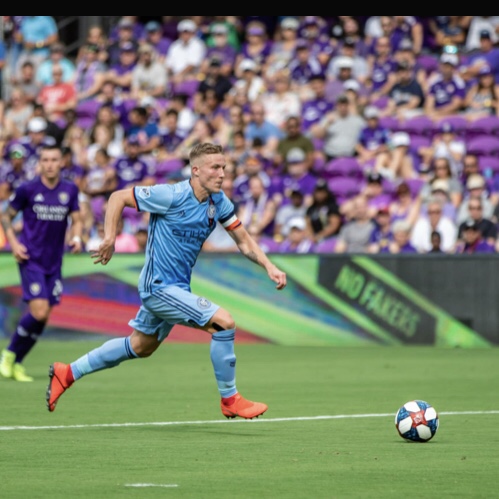 Sadly, the lead was blown in the second half by Orlando City goals scored by Mueller and Tesho Akindele.  The first Orlando goal appeared that to be savable and Johnson may have judged the ball’s path incorrectly.   The second goal was executed pretty quickly after Orlando substitutes Nani and Dom Dwyer came onto the field.

The controversial piece of the game was a handball by Chanot on a shot that was ruled by VAR not to have been a handball. To all viewers who saw the replay in slow motion, it was clearly a handball but VAR is viewed by one camera angle and in real time.  NYCFC dodged a bullet on that call and were able to finish the game level at 2-2. 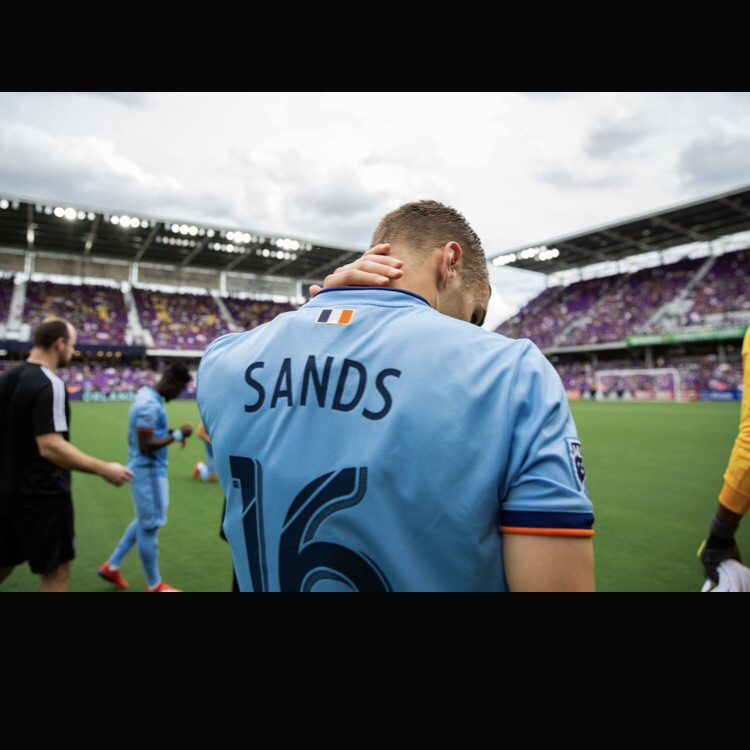 Of note, were inclusions of James Sands and Jonathan Lewis in the starting XI.  Sands played well in his first start but Lewis’ work was below expectations, considering his recent success with the US Men’s National Team. He seems to be doing a better job of getting back to provide pressure in our defensive third of the field but was generally unsuccessful in adding his usual offensive spark.

I did like what I saw in Mitri’s style of play after the first twenty minutes when he was settling in.  He’s quick, sees space very well and dishes out precise passes.  He also placed his corner kicks almost perfectly.  Dome said that he is not yet fully fit so I am looking forward to seeing the damage he can do to opponents when 100% in game form.  My takeaway is that Orlando City was the better team and deserved the win so we were lucky to get away with a point. 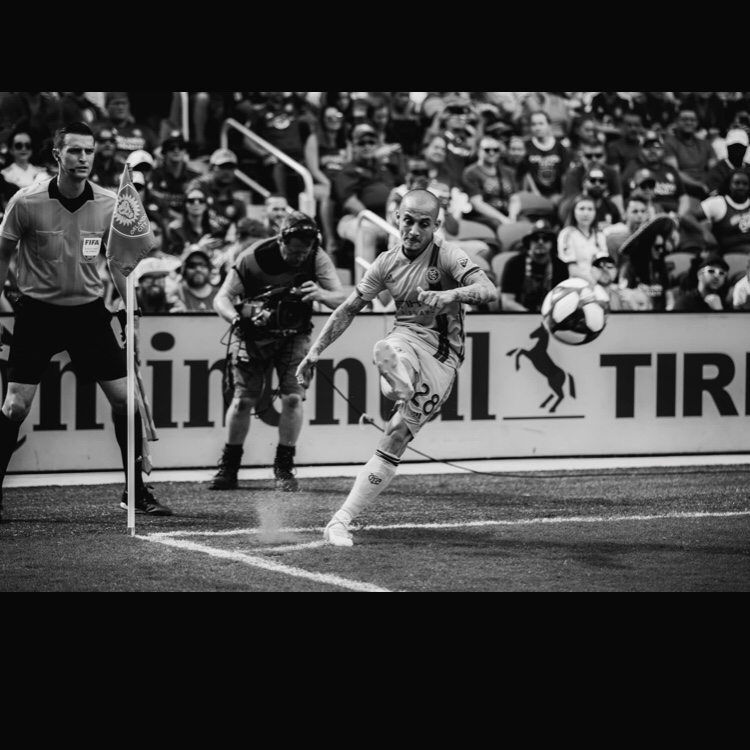 Next match is the home opener against D.C. United on Sunday, March 10th. D.C. just picked up a home win off reigning MLS Champion Atlanta United. D.C. looks strong and will be a formidable opponent for NYCFC.

Will NYCFC return to its strategic standard of maintaining possession and play a more attacking lineup with players like Ismael Tajouri-Shradi and Ronald Matarrita, or will we see an overall change in team tactics to defense and counter-attacking?