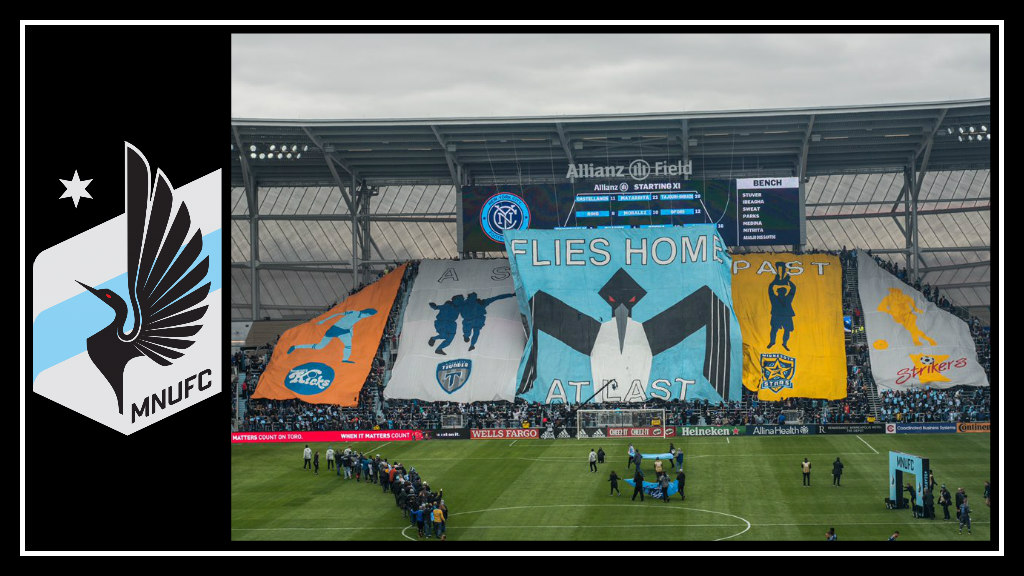 It did not feel real. Right up until the first smoke canister popped and the sulfur reached my nose, I expected to wake up any second. Honestly, Minnesota scoring three goals in the first half did nothing to reduce that illusion. It was a fast and furious forty-five minutes of soccer during which Ozzie Alonso redeemed his early yellow card (The first yellow in Allianz Field history!) by scoring (The first goal in Allianz Field history!) on a beautiful volley.

New York goalkeeper Sean Johnson gifted the Loons their third goal of the half with an own goal, which brought on flashbacks of the gaff which became synonymous with MN United amongst the international soccer community. Defender Brent Kallman, a Minnesota native and NASL-era Loon, referenced that moment post-match:

The rest of the match did not go Minnesota’s way. Defensive errors, midfield blunders and a general lack of focus allowed New York to tie it up and the Loons just could not get back on the front foot. After the match, coach Adrian Heath remarked, “I’m sure for the neutral it was an entertaining game […] We gave away three poor goals in my opinion. They didn’t have to work hard enough for the goals.”

“When I came in, in the end, it was wide open and I was a little concerned because we were throwing bodies forward and I was worried about getting caught out in a foot race which I don’t want to be stuck in,” Kallman reflected on the stalemate. “But, uh, I think that’s just natural; we were really wanting to push for the win and give that to the fans, so guys were pushing forward really trying to get that goal, so it’s to be expected a little bit.”

Both men spoke highly of the supporters. Heath said, “Our supporters were magnificent, I thought the noise in the stadium was incredible. It bodes for better times ahead I think.” Kallman commented that “they set a really good bar for going forward.”

Early on, the supporters put on a vivid display of their commitment to the club and the grit that is in large part responsible for the club’s path to this Opening Day. The deployment of the largest tifo display in Minnesota history was not flawless. There were some snags and tears, but the reaction by the tifo crew and Wonderwall occupants underscored the buzzwords that have been bandied about by the media all week: resilience and perseverance.

What a metaphor for this club’s history. Without trying to – they certainly didn’t want such an opportunity – the Wonderwall embodied all the positive attributes their tifo was meant to celebrate. The supporters came together to make it work and honored the club’s NASL legacy in a beautiful way.

There is a lot of room for improvement on the pitch, but this club and its fanbase made a statement on Saturday. Minnesota United FC has a home to call its own and we’re not going away any time soon.