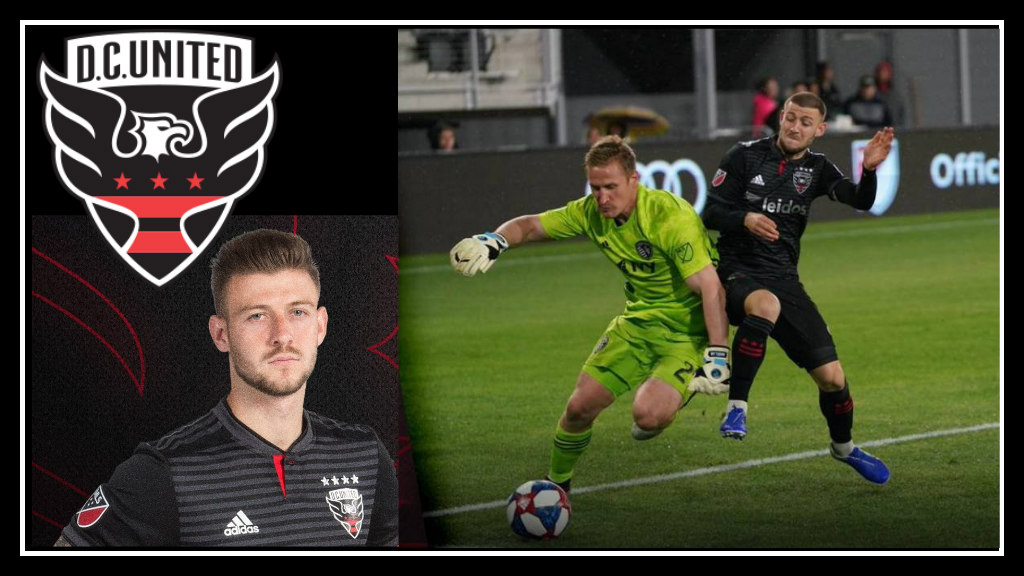 Paul Arriola, the tenacious 24-year-old Californian, made the game winning goal for D.C United in the 78’ during a tough match against Sporting Kansas City. Attendance at Audi Field was not at its best Sunday night, with a recorded total of just over 12,500. Any variety of factors could have been to blame: Mother’s Day, Game of Thrones, or the chilly weather that belonged back in early March.

With numerous Sporting KC starters missing due to injury on the team’s first visit to Audi Field, it would have been easy for D.C. United to underestimate the depleted team. Instead, the Black-and-Red exhibited a real sense of urgency on the pitch, as D.C. needed a win to keep pace with the Philadelphia Union atop the Eastern Conference Standings. (Both teams currently are in possession of 23 points.)

The first half of the match saw a focused D.C. United trying to break through holes in Sporting’s defenses and the veritable brick wall that is Tim Melia. Sporting’s Dániel Sallói was shown a yellow card early, in the 11’, for dragging D.C.’s creative Leonardo Jara back.

Shortly after, Captain Wayne Rooney took a beauty of a free kick in the 14’, only to have his effort thwarted by the talented Melia. The first half continued to slip away, with both D.C. and SKC unable to find an opening. At halftime, the score stood at 0-0.

As the second half started, the weather deteriorated further and pouring rain pummeled the pitch. While the Black-and-Red faithful remained, many in ponchos, a good number of fans exited Audi Field, unwilling to suffer any longer. The pitch became slick, sending players sliding and giving both D.C. and Sporting a tough time. Medics were called onto the field numerous times as players went down hard. Although there were a few scares, everyone emerged from the match relatively unscathed.

Just when it looked like D.C. would have to accept a draw, Paul Arriola curled the ball in past Melia. The shot was the ‘something special’, in the words of Ben Olsen, that the Black-and-Red needed to surpass Vermes’ team and take three points for the District. For fans that had been braving the elements all evening, Arriola’s goal immediately injected a sense of warmth into the crowd at Audi Field. Defender Russell Canouse, said, “It was unbelievable. Once it left his foot, we had the feeling that it was going in.”

After scoring, Arriola immediately sent up his love to his late father, Arturo, who passed away late last year. Lifting his cleat to his ear and pointing skyward, there was no doubt who Arriola was dedicating his goal to.

Arriola’s goal is his third this season, bringing him even with Luciano Acosta. Only Captain Wayne Rooney has scored more in 2019. Arriola said, “This time last year, I don’t even think I had a goal. So, it feels good…But more importantly, today was a complete team performance. In the end, it’s not about who wins it, it’s which team wins it.”

According to Head Coach Ben Olsen, Arriola is establishing himself as a viable option in terms of scoring goals for D.C. United. ‘Lucharoo’ (Acosta and Rooney) have been systematically marked in almost every match, making it more difficult for the duo to create chances on goal. Their dynamic partnership led to D.C. United climbing the Eastern Conference Standings in 2018 to a playoff berth and other teams have taken note. Arriola’s ability to create chances and to distract from the pair remains an incredible asset for D.C. United as the season progresses.

Sunday night was a true team effort for D.C. United, with every player contributing substantially to the team’s success. Goalkeeper Bill Hamid logged his 60th career clean sheet (and 6th this season), placing him 11th in all-time shutouts in MLS.  Ulises Segura and Chris Durkin saw minutes in the second half. Talented homegrown player Durkin will head off to the U20 FIFA World Cup later this month.

Marquinhos Pedroso, D.C. United’s recently acquired defender from FC Dallas, put in a solid 90-minute performance, adding much needed coverage to the backline. Pedroso brings a wealth of international experience to the team. He has played in his home country of Brazil, as well as Hungary and Turkey. Olsen was pleased with Pedroso’s performance in the match, saying, “I certainly enjoyed watching him.” The defender’s presence allowed D.C. to return to their comfortable formation on the pitch with a four-man backline.

D.C. United is about to hit the road for two matches, on Wednesday against Toronto and on Saturday against Houston, in what Olsen calls ‘silly scheduling.’ When asked how he would deal with his first true travel test since coming to MLS, Captain Wayne Rooney just smiled. “When you’ve got four kids at home, and you’re used to flying with four kids, yeah, any flight is easy without them.”

D.C. United plays Toronto FC this Wednesday, May 15th, and then moves on to face the Houston Dynamo on Saturday, May 18th.