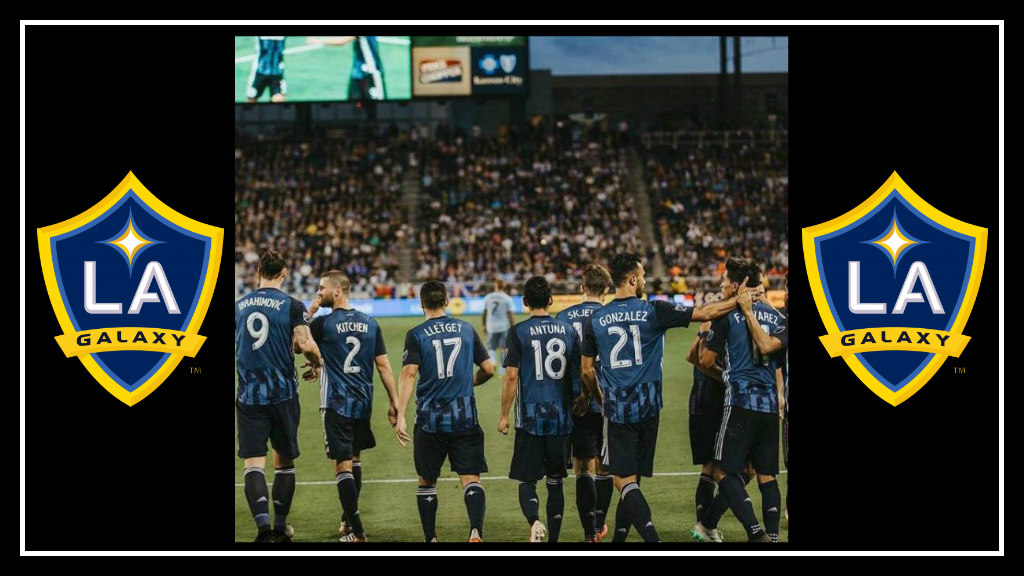 LAG was diverted to St. Louis en route to Kansas City due to thunderstorms and a major tornado that had dropped debris at the international airport. The players didn’t use the unusual travel conditions as an excuse. They ended up with a 2-0 win, breaking a 12 year streak of not winning when away at SKC.  The game didn’t initially look to be going that way though.

Both teams came out wearing Pride shirts, then LA Galaxy kicked off in night navy. Back in the line-up were Perry Kitchen, Dave Romney, and Jorgen Skjelvik. Zlatan Ibrahimovic also returned after serving a 2- game suspension. Corona took the bench, but offensive sparks included Pontius, Emil Cuello, and Ema Boateng.

The first half started slow; both teams looked evenly matched. The Galaxy seemed to lack confidence and were unable to connect to finish goals. Sporting gave their opponents a run for their money.

In the 25th minute, Romney nearly headed in a goal off a 4th corner kick from Lletget, but it was stopped by Melia and cleared by SKC’s defense.

In the 37th minute, Zlatan took on three defenders to get the ball to Antuna, who just couldn’t get on it to score.

The stats read in favor of Sporting KC.

The second half started with Russell threatening the Galaxy. There were corner kicks aplenty, but by the 53rd minute the match was still level.

Finally, Favio Alvarez broke through in the 56th minute with a header, making his first goal with the LA Galaxy.

The G’s were not satisfied with only being up one goal. The strategy was to wear out SKC and it worked. In the 69th minute,  Ibrahimovic went one on one against Melia who denied him and kept the lion hungry.

Zlatan finally got his goal in the 86th minute.

Besides #9, Kitchen was essential to getting the numbers on the scoreboard. With Rolf Feltscher and Diego Polenta out on injuries and Araujo called up to the US U-20’s World Cup in Poland, Kitchen was back playing defensive midfield and seemed to be everywhere, actually creating chances and defending.

Bingham came up with big saves again to keep the clean sheet. He had help from Steres In the 16th minute, who made a last-second block on a shot from Rowe.

Overall, the Galaxy looked good and got their second away win in a row.

I had the opportunity to interview a few of the players and head coach Guillermo Barros Schelotto post-match.

Zlatan, on his chemistry with Alvarez and Antuna: “It was good. We played with two strikers in the first half and we created good chances. I think we should have scored one or two goals. In the second half we changed the system again and it helped because we could close the spaces more because Kansas plays good football. They have a good system. You need to have patience against them and then punish them when you steal the ball or they make a mistake.”

It seems the Galaxy are really getting ahold of the formation and utilizing individual talents to connect as a team.

They just had four losses a couple of games ago and while no one really wants to look back, the Galaxy are seen as champions and leaders of the league, so when they’re not performing as such and still have the shadow of the 2017-2018 seasons hanging over them, I really wanted to know how the Galaxy dealt with criticism to make it proactive for them as a team and individually.

Skjelvik on how he handles criticism: “There’s always going to be people criticizing you and criticizing the team, as well. We had a bad stretch where we lost a lot of games. Of course, people have opinions. That’s good – it shows that people care about the team. We just use that as motivation for the next games. Now we’ve turned things around so that’s good.”

Lletget on criticism from fans: “I think we have some guys, including myself, that have really sort of experienced it. You get criticized as a team, especially with the four losses in a row. A club of this stature is obviously not used to that and the fans are not used to that. It’s something that I think we managed well. We got together. We didn’t crumble. More than anything, we should be proud of ourselves from that standpoint. We move on now and I think we’ve turned the table.”

Zlatan gave a classic response on how he deals with criticism: “Criticism is everywhere. I like it. I eat it for breakfast… and then for lunch.”

This game is psychological and I want to see the team in top form all around. It’s good to see their passion for the game fueled. This win moves the Galaxy up to second place in the Western Conference for now. It definitely helped boost their confidence for the next match, which is at home and will be the Galaxy’s turn to host Pride Night against the New England Revolution.

Schelotto: “We will keep working and trying to get better every day and to get another three points on Sunday in LA.”